Jailed Kremlin critic Alexei Navalny has shared a picture of his ‘freshly shaven head’ from a prison colony in Russia which he today likened to a ‘concentration camp’.

The Russian opposition leader described hellish conditions at the penal colony where he claims he is woken every hour at night by guards assigned to prevent his escape – and says that inmates are even banned from swearing.

‘I think someone upstairs read Orwell’s 1984 and said, yeah, cool, let’s do this,’ said a post on Navalny’s Instagram page.

‘Video cameras are everywhere, everyone is watched and at the slightest violation they make a report.’

It sparked a wave of anti-Kremlin protests which in turn have led to a police crackdown that has further angered foreign diplomats.

Navalny had returned to Russia in January five months after surviving a nerve agent attack on board a plane in Siberia which he accuses the Kremlin of orchestrating.

His exact whereabouts had been unclear after he was moved from a jail near Moscow and his lawyers said they did not know where he was being taken.

But it is now confirmed that he is being held in a prison camp in the Vladimir region which is notorious for its strict regime. 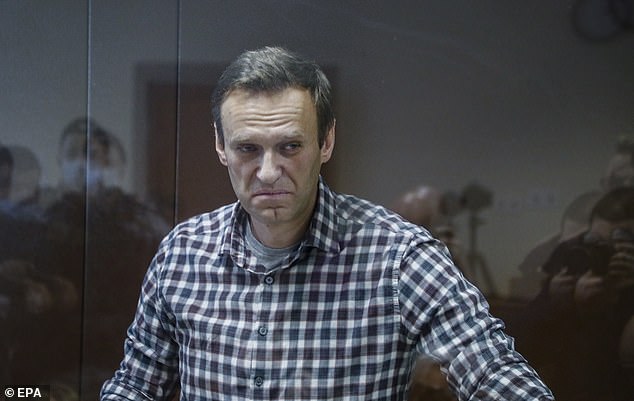 Alexei Navalny was imprisoned after returning to Russia earlier this year