Singapore: Hillary Clinton says China’s intimidation of regional neighbours cannot continue but she believes Western powers must pay greater attention to Russia, claiming its use of non-state actors was “going to become a greater and greater threat”.

The former US secretary of state and Democratic presidential candidate took aim at Russian President Vladimir Putin during a virtual appearance at the Bloomberg New Economy Forum in Singapore on Friday.

“He has a very large mercenary force that has been operating everywhere from Syria to the Central African Republic,” Clinton said.

“He has a very large stable of hackers and those who deal in disinformation and cyber warfare, both in and outside of the government. He’s engaged in a lot of asymmetric power moves.

“With his oligarchic coterie, he has utilised many non-state actors to pursue personal as well as nationalistic goals. And I think that’s going to become a greater and greater threat.”

Clinton is no fan of Putin, having been defeated in her bid for the presidency in 2016 by Donald Trump amid Russian interference in the election.

But her comments come in a week when there have been fears about a new invasion of Ukraine by Russian forces after a build-up of tens of thousands of troops on its border.

US President Joe Biden held his first face-to-face meeting with Putin in Geneva in June and the Kremlin said on Thursday another virtual summit was being planned before the end of the year.

Seeking to dial down the temperature of its geopolitical rivalry with China, Biden this week met President Xi Jinping and Clinton predicted on Friday the US would reconsider the tariffs placed on Chinese goods during the Trump era, although forecast that “they won’t all disappear”.

“Of course we should cooperate on a range of issues,” Clinton said.

“But we also cannot permit the kind of aggressive military build-up, the kind of efforts to dominate the maritime navigation, the intimidation of nations in the larger Asia-Pacific region.” 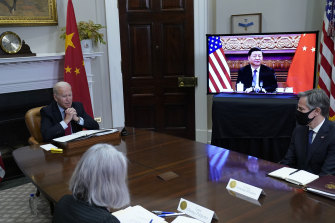 China has in recent months flown increasing numbers of military jets in the airspace of Taiwan, which in claims sovereignty over and has vowed to reassert control over by 2049.

Beijing has also been at the centre of several stand-offs this year over territorial incursions and activity in the contested South China Sea.

The latest occurred this week with the Philippines reacting angrily to Chinese coast guard vessels firing water cannons at two military supply boats en route to a Filipino outpost in the Spratly Islands.

Australia is itself in an extended diplomatic and trade dispute with China and Clinton described the establishment of the AUKUS defence agreement between Australia, the US and the United Kingdom and as an important move “to buttress Australia as a strong partner in a superior military presence”.

The talks between Biden and Xi were preceded by a pledge by the US and China to boost their cooperation on climate change action at the COP26 conference in Glasgow.

The US took a leading role at the climate change summit and its climate envoy John Kerry told the Singapore forum that commitment would not change even if Trump was returned to the White House for a second term after the 2024 election.

“The marketplace is going there, whether the government does or not. General Motors and Ford Motor Company have already announced they’re going to only produce electric cars by 2035,” said Kerry, also a former US secretary of state.

“You think they’re going to spend hundreds of millions of dollars retooling those plants for electric, and then turn around because some politician comes in and wants to deny science again?

“The United States is not stepping up to say, hey, we’re the leader here. Everybody’s got to step in together. But we are here and make up for the deficit of a guy who didn’t understand science and didn’t have any economic rationale, and who pulled out of the Paris Agreement and hurt the world in doing that. No one politician can undo what is about to happen.”