Monday was the first truly live results show of American Idol Season 20, as 10 semifinalists from the top 20 advanced to the top 14 based on Sunday’s public vote, after which the other 10 battled it out in real time for four spots selected by the judging panel. Sunday’s competitive episode was so strong that judge Luke Bryan had said it felt like a “finale night,” so it was of course unavoidable that some worthy contenders would be eliminated Monday.

However, it was still surprising that among the singers the judges ultimately decided to send home were Jacob Moran, whom Katy Perry had declared “one of the most incredibly talented people here” (after he sang her own song!) and even “the best singer of the season,” and Sage, whom Lionel Richie had once described as “the total package” and said gave a better performance Monday than she had during Sunday’s top 20 round. 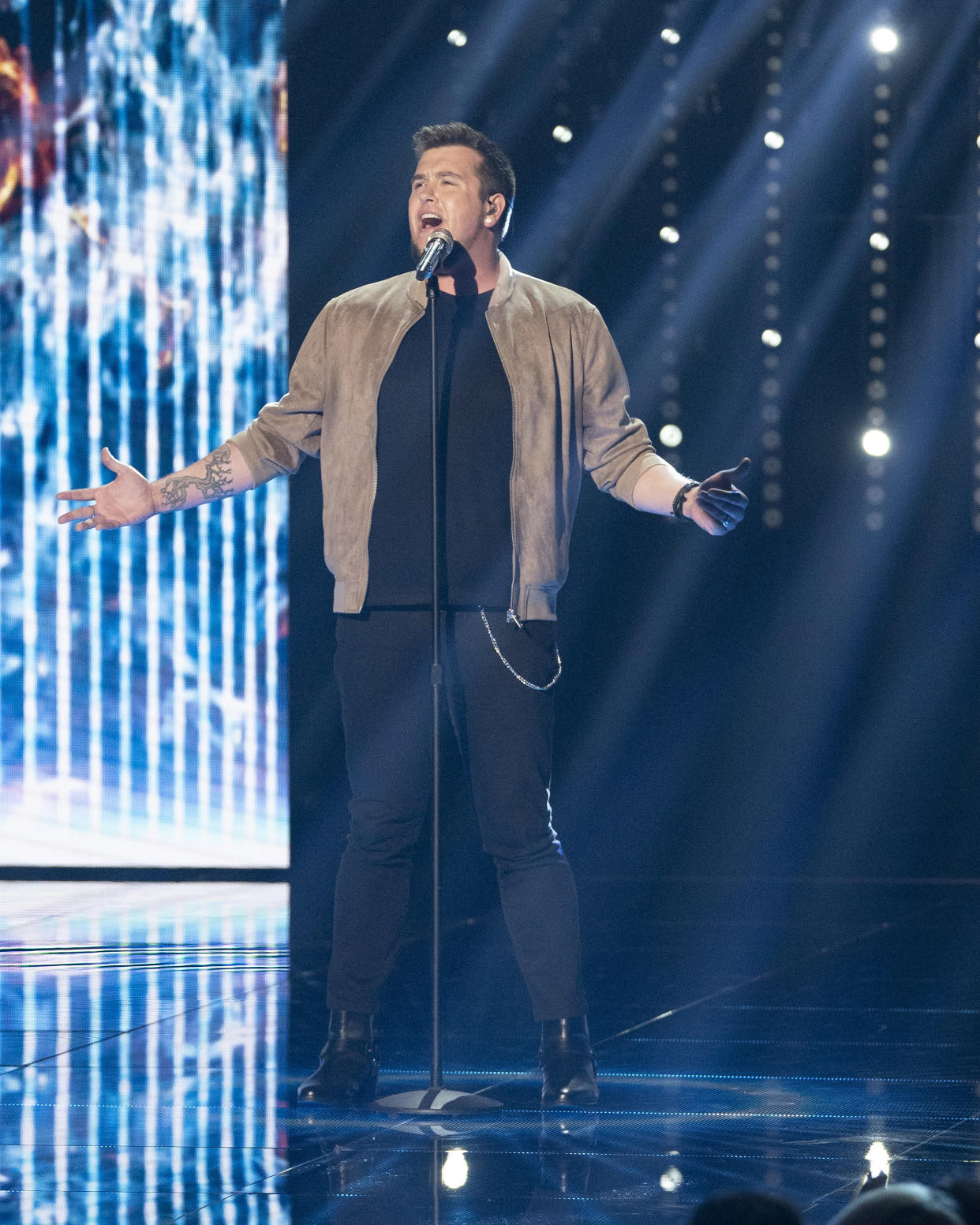 As for the 10 safe singers, they all performed victory-lap songs, the best of which were Ava Maybe’s feisty “'Cuz I Love You,” Christian Guardino’s clearly Postmodern Jukebox-inspired “Creep,” Leah Marlene’s dazzling original “Wisher to the Well,” power-belter Nicolina Bozzo’s “She Used to Be Mine,” Emyrson Flora’s brooding “Love in the Dark,” and Fritz Hager’s jubilant “Golden.” That triumphant group was rounded out by Lady K and, perhaps unsurprisingly, three country contestants: Huntergirl, Dan Marshall, and Noah Thompson. But then it was time for the other 10 to sing for survival, in a brutal and occasionally awkward live-TV format that reminded me of rival show The Voice’s Instant Save sing-offs. Most of the at-risk contestants handled the pressure well, but one really did not.

Former The Voice finalist Allegra Miles took her rejection like a pro — even when host Ryan Seacrest bluntly and awkwardly told her, “America didn’t fall in love with you” — channeling all her frustration and hurt into her passionate original breakup ballad, “Tainted.” Katy noted that disappointment actually worked wonders for hyperactive “kooky Canadian” Cameron Whitcomb’s Steeldrivers cover, telling him, “It brought you down a little bit, slowed you down, focused you. … You sound better a little disappointed!” (I suspect that Cameron’s brother Sheldon, who optimistically got a massive tattoo of the American Idol logo on his backside when Cameron made the top 24, might have been more disappointed than Cameron was.) And Jay Copeland, who is apparently just called “Jay” now, turned Imagine Dragons’ “Believer” into a compelling fight song and had Luke noting, “That performance is why we gave you the platinum ticket.”

But Jacob and Sage seemed to have the most fight in them. Sage was clearly saddened to learn that she hadn’t been voted through, but then she immediately put on her game face to spectacularly belt out Allen Stone’s “Brown-Eyed Lover,” after which Lionel raved, “That is the way you come out after bad news, OK? I mean, when I say you absolutely took charge, it's like, ‘Who said no? Who said no? I don't understand it.’ But the thing was, your attitude was so positive, so direct. You owned the stage, put your foot forward, and knocked us out.”

Jacob, who’d appeared on Idol before, covered Katy’s Olympic anthem “Rise” with flawless vocal control despite fighting back tears, and Katy was so shocked and awed that she told him, “I've retired that song now. There are a few notes that I've never heard in that song! … Technically, I think you're one of the most incredibly talented people here. I see you coming out with those boots, and the whole artistry, and all of it. I think you're taking shape. And you will rise.”

Elli Rowe, the sweet little girl with the soft little voice, was put in the unenviable and daunting position of having to follow Jacob the powerhouse with her winsome cover of Kodaline’s “All I Want,” and while she did a fine job, it was clear the judges had already made up their minds to send her home. In one of the evening’s many awkward moments, Lionel seemed to temporarily forget that Monday’s eliminations would be decided by the judges, not by viewers, telling Elli: “That's the best performance I've seen, but you have to understand, this is about strong time now. And so, you did the best ever, but at the same time, is it enough? America will tell us!” Oops.

It was also pretty obvious that the judges weren’t going to put through Katyrah Love, even though Luke told her, “To get that news, and to go deliver a performance like that, was amazing.” Luke’s “critique” of Katyrah’s confident cover of Chaka Khan’s “Through the Fire” was actually more of a kiss-off, as he vaguely added, “Thank you for making this a decision for us to get together and see who we're going to send through. … I keep forgetting about how much this night hurts our hearts as judges.”

As for the one up-for-elimination contestant who didn’t rise to the challenge, that was Cadence Baker, who’d struggled with nerves and confidence all season. It didn’t help that — in Monday's most awkward exchange — Ryan faked her out at first by saying, “Last night, Katy called you a fighter. But will the fight continue? It will!” Cadence then broke into a huge grin of relief and excitement, before Ryan added, “Because it's time to keep fighting… for a spot in the top 10, for a judges' pick!” The smile and color left Cadence’s face as she processed this rudely communicated new information, and she was visibly/audibly rattled as she took the stage to cover an already difficult Whitney Houston song. (Not cool, Ryan!)

The remaining two contestants up in the bottom 10 were country singer Mike Parker, who presumably was edged out by Huntergirl, Noah, and Dan, even though he’s basically been declared the New Jimmie Allen for weeks. “I'm quite frankly very shocked you're not in our top 10,” Luke told Mike, and the live studio audience seemed shocked as well, booing and gasping when Ryan announced the news. But Mike held his own covering “Bed on Fire” by Teddy Swims and lived up to his hype. And finally, there was wild-eyed rocker Tristen Gressett, whose risky Weeknd cover apparently backfired Sunday, but who got right back in the game by wisely choosing Lenny Kravitz’s “Are You Gonna Go My Way” as his on-brand Monday survival song. “You are a rock star. … You don't belong in any other position. This is your path. And I think you know that now,” Katy assured him.

Based on Monday’s performances and overall track record, my four picks would have been Tristen, Mike, Allegra, and Sage. Well, three out of four ain’t bad. The judges did go with Allegra (not surprising, considering that Luke had called her Sunday “Free Fallin’” performance “one of the most magical things I’ve ever witnessed sitting in this chair”), followed by Mike and Tristen. But they also saved Jay, presumably because they didn’t want to seem foolish for giving him that platinum ticket in the first place (especially one of this season's other platinum contestants has already eliminated herself). So, this sadly meant we said goodbye to Sage, along with Cameron, Katyrah, Cadence, Elli… and Jacob. I suspect that the Jacob decision was not unanimous, and that Katy was less than thrilled.

But the eliminations are going to get more difficult from here, as this is a very strong top 14. I don’t think it’s the strongest ever, as the judges insisted — they say that every season! — but really any of these talented kids have the potential to win this thing. Tune in next Sunday, as they’re mentored by Season 16 third-place contestant-turned-country superstar Gabby Barrett — who’ll show them that even if they don’t win, they could have very bright futures anyway.