A British-built spacecraft got its first glimpse of Mercury as it swung by the solar system’s innermost planet last night.

The BepiColombo mission made the first of six flybys of Mercury at 11.34pm yesterday, using the planet’s gravity to slow the spacecraft down.

After swooping past Mercury at altitudes of under 125 miles (200 kilometres), the spacecraft took a low resolution black-and-white photo with one of its monitoring cameras before zipping off again. 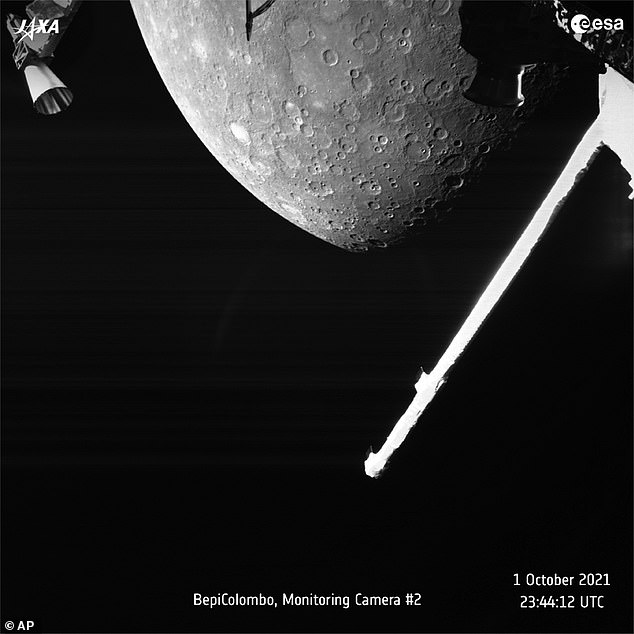 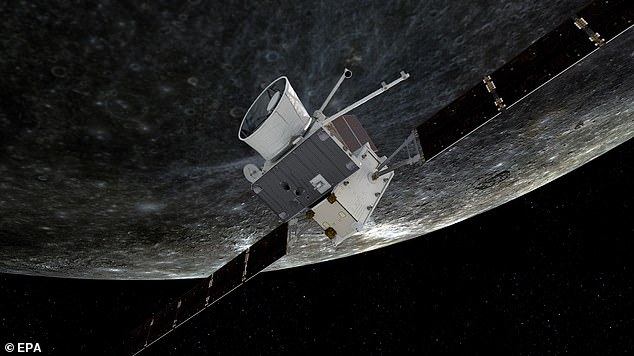 The joint mission by the European agency and the Japan Aerospace Exploration Agency was launched in 2018, flying once past Earth and twice past Venus on its journey to the solar system’s smallest planet

For all its bland ‘dead’ appearance, Mercury is a very interesting place

It is the smallest planet in our solar system – only slightly larger than the Earth’s moon.

Mercury has  a solid iron core that measures more than half the planet’s diameter. Earth, by contrast, has a solid core that’s just 9.5 per cent of its overall girth.

One day on Mercury takes 59 Earth days. Mercury makes a complete orbit around the sun (a year in Mercury time) in just 88 Earth days.

The joint mission by the European agency and the Japan Aerospace Exploration Agency was launched in 2018, flying once past Earth and twice past Venus on its journey to the solar system’s smallest planet.

The mission aims to deliver two probes into orbit in 2025.

The two probes will study Mercury’s core and processes on its surface, as well as its magnetic sphere.

The aim is to better understand the origin, processes currently at work, and evolution of the planet closest to our parent star.

Travelling the 67 million miles to enter orbit around Mercury is no small task, requiring multiple flybys to speed up, or slow down, for orbital insertion.

The spacecraft’s cameras are positioned in a way to capture its solar arrays and antennas, and as the probe changes its orientation during the flyby, Mercury was seen passing behind the craft’s structural elements.

It is possible to identify large impact craters on the planet’s surface in the photo released by ESA.

Mercury has a heavily cratered surface much like the appearance of Earth’s Moon, plotting its 4.6 billion year history.

Mapping the surface of Mercury and analysing its composition will help scientists understand more about its formation and evolution.

Even though BepiColombo is in ‘stacked’ cruise configuration for the flybys, it will be possible to operate some of the science instruments on both planetary orbiters, allowing a first taste of the planet’s magnetic, plasma and particle environment.

The mission is named after Italian scientist Giuseppe ‘Bepi’ Colombo, who is credited with helping develop the gravity assist maneuver that NASA’s Mariner 10 first used when it flew to Mercury in 1974. 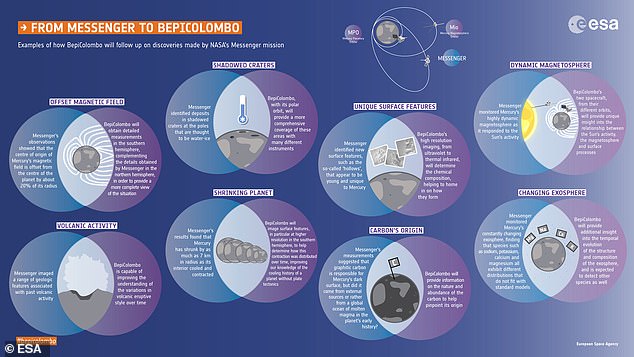 It includes the ESA-led Mercury Planetary Orbiter and the JAXA-led Mercury Magnetospheric Orbiter, which will study all aspects of the planet – from its core to surface processes, magnetic field and its exosphere 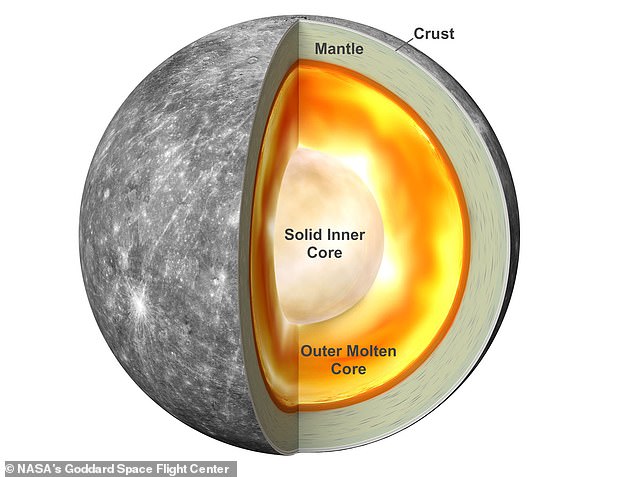 Colombo is known for explaining Mercury’s peculiar characteristic of rotating about its own axis three times in every two orbits of the Sun.

He also realised that by careful choice of a spacecraft’s flyby point as it passed a planet, the planet’s gravity could help the spacecraft make further flybys.

His interplanetary calculations enabled NASA’s Mariner 10 spacecraft to achieve three flybys of Mercury instead of one by using a flyby of Venus to change the spacecraft’s flight path.

The BepiColombo mission will build on the successes of its predecessors to provide the best understanding of the Solar System’s innermost planet to date.

The carrier will use a combination of electric propulsion and multiple gravity-assists at Earth, Venus and Mercury to complete the 7.2 year journey to the Solar System’s mysterious innermost planet

Once at Mercury, the orbiters will separate and move into their own orbits to make complementary measurements of Mercury’s interior, surface, exosphere and magnetosphere.

Scientists launched what they termed ‘a technological masterpiece’ on October 20, 2018 from Kourou in French Guiana on the back of an Ariane rocket.

It is due to take up station around Mercury in December 2025.

BepiColombo features three components that will separate upon arrival: