A powerful board of directors including two senior public servants breached their legal obligations while managing Victoria’s multimillion-dollar investment in the failed start-up Eloque, in a sign of dysfunctional governance six months before the joint venture folded.

The board members – among them Department of Transport secretary Paul Younis and Invest Victoria chief executive Danni Jarrett – appear to have broken the law in February when they failed to pass a mandatory vote to confirm if their company was solvent. 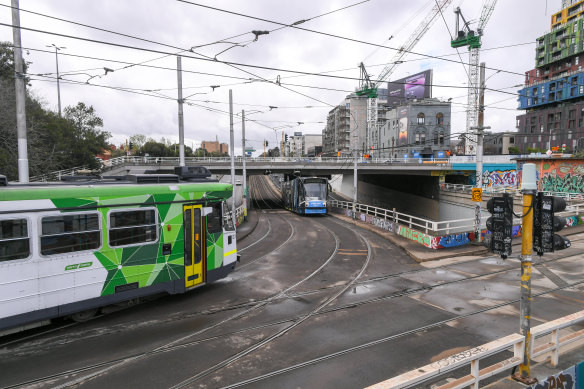 Eloque grew out of a trial at VicTrack to monitor its bridges with optic fibre.Credit:Justin McManus

The directors said the company was never at risk of insolvency and blamed the legal breach on an administrative oversight, which they rectified as soon as they identified it.

The revelation comes after The Age reported that the state lost $20 million investing in Eloque and buying its “revolutionary” bridge sensor technology, despite concerns from staff and independent experts that it was not viable and did not work as expected. The technology was developed at the state’s rail agency, VicTrack.

Eloque shut down in August, just 16 months after the Andrews government announced the partnership with US printing giant Xerox and backed it with a commitment of up to $82.5 million.

To manage the investment, the Department of Transport established a shell company known as HoldCo in 2020 to hold Victoria’s 37.5 per cent stake in Eloque, inject capital into the company and eventually receive the state’s share of profits.

But public documents show HoldCo wrote to the Australian Securities and Investments Commission (ASIC) in April this year notifying it that directors had failed to pass a solvency resolution by their deadline of February 15.

Directors have committed an offence under the Corporations Act and can be fined $4400 if they do not pass such a vote within two months of their set review date, which was December 15 for HoldCo.

A statement VicTrack provided on behalf of the board acknowledged the breach but said HoldCo’s only purpose was to hold the government’s Eloque shares and “at no time” was it at risk of insolvency. The board ultimately passed the solvency resolution on April 20 and notified ASIC about its breach on April 27, the statement said.

Younis, the Department of Transport boss, controlled ownership of HoldCo as its sole shareholder and, along with Jarrett, was one of two top bureaucrats appointed to its board.

Other directors are VicTrack’s chair and deputy chair, Geraldine Gray and Alan Hall, and Melbourne businesswoman Deborah Beale, who also sat on the board of the Eloque US parent company headquartered in Delaware. ASIC has not acted against any directors over the breach.

At the time of the breach, VicTrack chief executive Campbell Rose was serving as HoldCo’s secretary, which means he was responsible for ensuring it complied with its ASIC reporting obligations.

Rose was also chief executive of both Eloque and VicTrack for about 10 months, at a time when VicTrack was Eloque’s only paying customer. VicTrack has said it had a “management strategy” in place to deal with potential conflicts of duty while Rose was in the “interim” dual chief executive role.

Documents filed with ASIC show Rose ceased as HoldCo secretary on March 28. That is around the time he went on extended leave from Eloque and VicTrack, from which he is yet to return.

Sydney University corporate law professor Jason Harris said that, while he could not comment specifically on HoldCo, monitoring a company’s solvency and reporting to ASIC were two of a director’s most important obligations.

“This might look like a minor technical compliance obligation, but if you don’t comply with it, it’s a criminal offence,” he said.

Victoria used HoldCo to inject $7 million into Eloque in May last year and another $1.12 million in early September this year to cover the cost of shutting the business down.

VicTrack spent $9.85 million installing Eloque’s sensors on bridges around the state and $2.3 million on early trials of the technology. The sensors are now being removed.

Asked about Eloque on Tuesday, Allan said its technology was “proven to be successful” and that the venture only fell over when it tried to commercialise it.

“The issue … was that on further assessment, it was viewed that that was not value for money, which is why the project was not proceeded with,” she said.

The Age’s investigation into Eloque revealed Queensland decided not to buy its sensors after an independent review found the technology was not viable, raising questions about Victoria’s due diligence before it paid to install them on about 30 bridges.

Victoria’s shadow treasurer, David Davis, said the Eloque investment had been an “extraordinary waste allocation of money without proper processes and without proper due diligence” and raised conflict of interest concerns.