Home » World News » Boy, 13, duct taped to his seat after ‘trying to kick out window and attacking his mom’ on American Airlines flight

A TEENAGER was duct taped to his seat by airline staff after he reportedly tried to kick a window out of the plane mid-flight before allegedly attacking his mom.

Shocking footage shows passengers helping to restrain the 13-year-old boy after he became disruptive about an hour in an American Airlines flight. 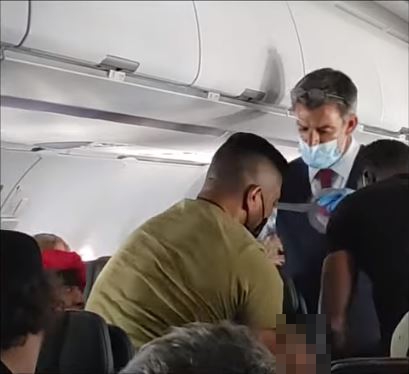 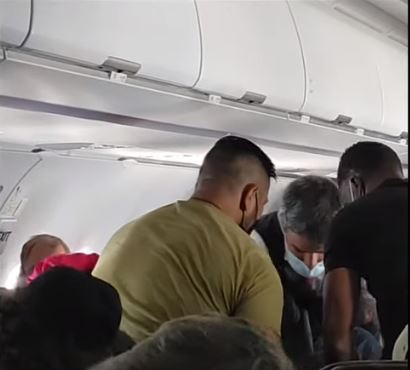 According to witnesses, during the journey from Maui, Hawaii, to Los Angeles, the boy attempted to stamp out a window beside his seat, reports CBS Los Angeles.

He then allegedly became physical with his own mother before others stepped in to help.

Fellow passengers helped restrain the teen as the plane diverted to Honolulu, where he was taken into custody.

A clip from the flight shows an airline host and passengers holding the boy down.

The flight attendant then appears to use duct tape to strap the boy to his seat as other passengers watched on.

No injuries were reported.

It comes after a Frontier Airlines passenger was duct taped to his seat after allegedly groping and punching flight attendants.

Maxwell Berry — a 22-year-old from Norwalk, Ohio, — was reportedly duct-taped while his July 31 flight was headed to Miami, Florida.

According to a police report from the Miami-Dade Police Department, Berry was intoxicated when he brushed an empty cup against the backside of a flight attendant.

He then reportedly spilled his new drink on his shirt, went to the bathroom, and walked out shirtless.

After a flight attendant attempted to assist Berry with obtaining a new change of clothes from his carry-on, other female flight attendants were groped in the chest, the report explains.

Berry — a graduate of Ohio Wesleyan University according to his LinkedIn profile — then allegedly punched a male flight attendant in the face and boasted about his parents being worth $2million.

Since the altercation took place mid-flight, from Philadelphia to Miami, Berry had to be restrained.

Once the plane reached its destination, Berry was arrested and hit with three counts of battery charges.

He was then transported to Miami-Dade County Jail – TGK Correctional Center.

Following the chaotic event, Frontier Airlines issued the following statement: "During a flight from Philadelphia to Miami on July 31, a passenger made inappropriate physical contact with two flight attendants and subsequently physically assaulted another flight attendant.

"As a result, the passenger needed to be restrained until the flight landed in Miami and law enforcement arrived."