A group of prominent defamation lawyers has urged state and territory governments to abandon a nationally-agreed set of reforms to the country’s defamation laws, just hours after NSW, Victoria and South Australia announced the laws would commence on July 1.

Sydney barrister Sue Chrysanthou, SC, who is acting for federal Liberal minister Christian Porter in his defamation case against the ABC, is among the signatories to a briefing note circulated to state MPs on Thursday, which condemns the changes as “fundamentally flawed” and calls for them to be scrapped. 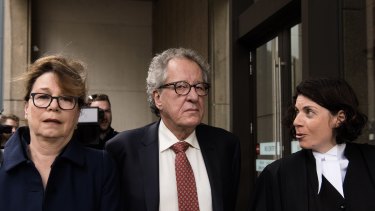 The note says the changes, which are expected to be introduced in each state and territory via mirror legislation, would add time and expense to court proceedings and should be axed in favour of a new reform process led by the Commonwealth.

NSW Attorney-General Mark Speakman said late on Thursday it was “disappointing that at five minutes to midnight some lawyers are seeking to derail reforms” that were aimed at “end[ing] Australia’s reign as the defamation capital of the world”.

Absent from the list are lawyers who appear regularly for mainstream media outlets in defamation cases.

The defamation changes have been agreed to by all states and territories but, to date, only NSW, Victoria and South Australia have passed legislation. Mr Speakman said on Thursday that the new law would commence in those states on July 1. Other jurisdictions will follow suit either on that date or as soon as possible thereafter.

The new laws include a “serious harm” requirement aimed at weeding out minor claims before a costly trial and a new public interest defence, both modelled on British law. It is not yet clear how these changes will work in practice.

The briefing note says the serious harm threshold, which requires a publication to have caused or be likely to cause serious harm to a person’s reputation, is unlikely to achieve its aim of reducing court time and costs and may result in a “substantial mini-trial” on that question before a trial.

It also says the public interest amendments “are unnecessary, will not lead to an appreciable reduction in the amount of defamation litigation or permissible legitimate public interest journalism, will increase legal time and costs and may in the short-term encourage irresponsible and unreasonable journalism”.

The new laws seek to reduce defamation payouts by setting out how the cap on general damages for non-economic loss should operate. The cap is currently $421,000 but is adjusted for inflation. The maximum amount “is to be awarded only in a most serious case”, the amendment says. A plaintiff may still receive a higher payout if aggravated damages or damages for economic loss are awarded on top.

The briefing note says the amendments “seek to replace the cap [on damages] with a scale of general damages”, but there is no “compelling reason” for the change.

“In the past 16 years, damages have only on rare occasion exceeded the statutory cap,” the briefing note says.

In 2019 actor Geoffrey Rush was awarded a record $2.9 million in damages including $850,000 in general and aggravated damages because judges in a series of cases have ruled that the cap on damages does not apply at all if aggravated damages are awarded.

“Any discussion of damages must be seen in the context of the disproportionate cost to commence and maintain an action in defamation – particularly against media defendants who can deduct their defamation expenses as a cost of doing business,” the briefing note says.

The briefing note says Australia should follow the lead of Britain and scrap juries for all but exceptional cases.

Mr Speakman said the model amendments “were developed by the Defamation Working Party, represented by all Australian jurisdictions, over two years following two rounds of public consultation, four stakeholder roundtables, and on the advice of an expert panel comprised of judges, academics, defamation practitioners and the NSW Solicitor General.”

“These historic reforms are about protecting reasonable public interest journalism and unclogging our courts from trivial matters.”

He said the provisions were agreed unanimously by all states and territories at the 27 July 2020 Council of Attorneys-General meeting and encouraged the authors of the paper to engage with the consultation process for a second round of defamation reforms.

“It may prove more productive than seeking to dismantle widely agreed reforms after they have passed several Parliaments,” he said.