Making himself at home! Massive black bear – dubbed Marty – surprises Connecticut family after their pitbull finds him hibernating underneath their backyard deck … and they’re letting him stay

A Connecticut family discovered a surprising houseguest when they ventured below their backyard deck to investigate what was making their dog act strangely: an adult male black bear.

Plainsville residents Vincent Dashukewich and Olivia Unwin were playing with his three year-old pitbull, Cali, when they noticed the pup’s behavior was a little off.

Usually sweet and obedient, Cali began growling insistently near the raised outdoor deck in the garden.

When he went to investigate, Vincent was shocked to find a hibernating black bear curled up beneath the small crawl-space. 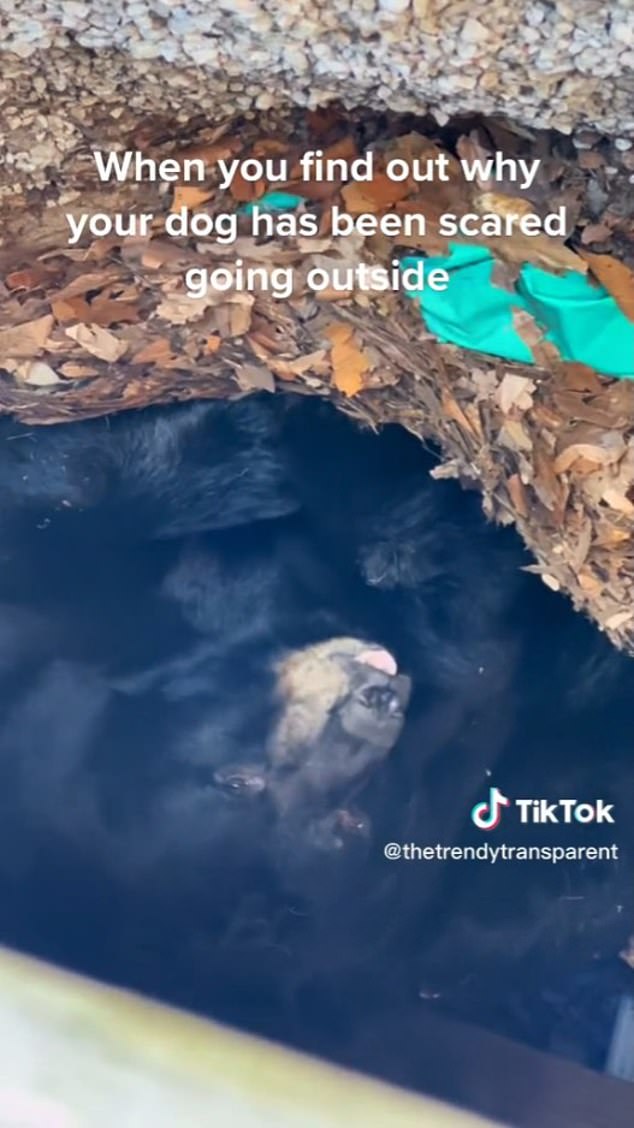 Connecticut couple Olivia and Vincent were confused when their usually relaxed dog began to act strangely, barking and growling at the raised deck in the backyard 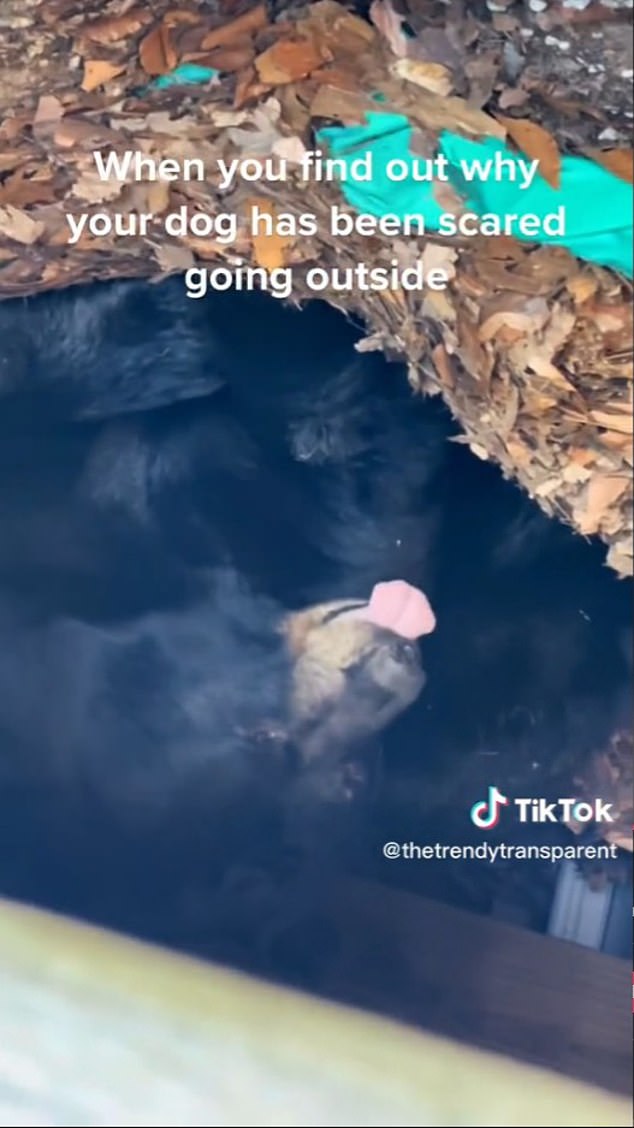 Venturing over to investigate, Vincent found a surprising lodger – a full size adult male black bear, who had chosen the cozy crawl space as his hibernation spot for the winter.

In a now viral video posted by his sister, Tyler, the huge animal can be seen neatly nestled within a bed of leaves, staring groggily at the camera.

The couple, who live with Vincent’s parents, as well as his sister and her daughter, quickly called the Connecticut Department of Energy & Environment Protection (DEEP).

After reviewing pictures of the interloper, the agency identified it as an adult male black bear – animals that, at full size, can weigh up to 550lbs.

The Dashukewichs were advised that they could either force the bear to flee by harassing him with noise and stimulation, or let him rest until he is done hibernating, likely in several months. 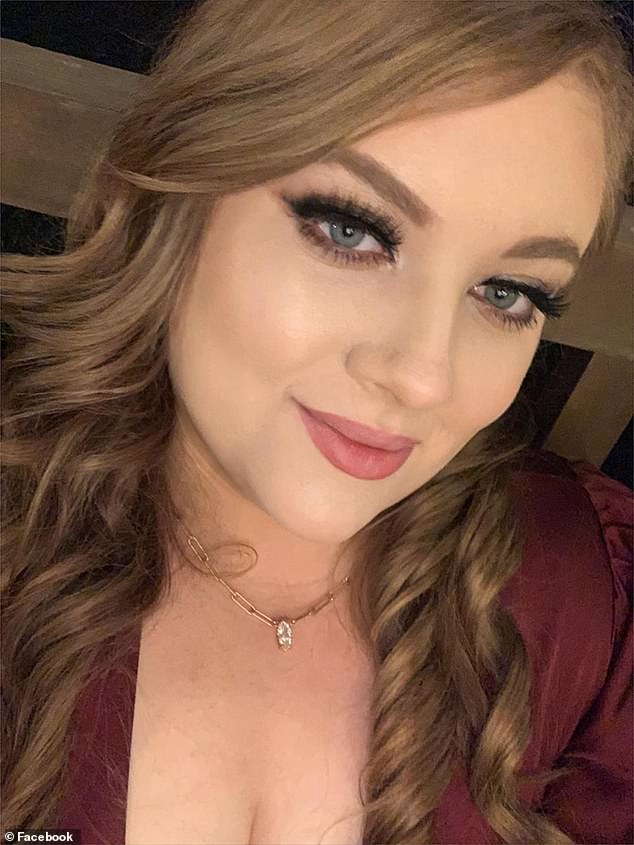 Vincent’s sister, Tyler, first posted the video to her Tiktok, with the caption ‘When you find out why your dog has been scared going outside’. The video soon racked up over 16 million views 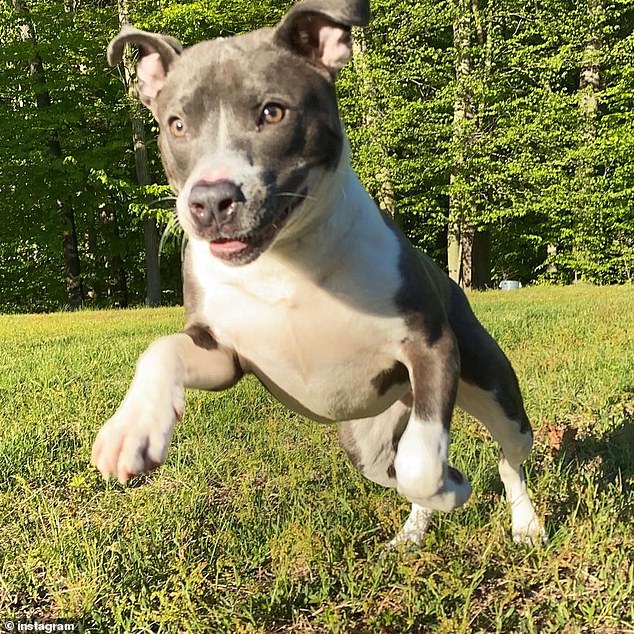 The pup in question was three year-old pitbull Cali, who is generally remarkably docile and sweet, claims her owner

Bravely, they chose the latter.

‘He hasn’t bothered us at all,’ Vincent, 28, told the New York Times, ‘So we feel like there’s no reason to move him.’

The siblings told news outlets they had sighted bears nearby their parents’ residence before, but never has one made itself at home in quite the same way.

The bear, dubbed Marty, has since developed a substantial social media following courtesy of his new hosts. 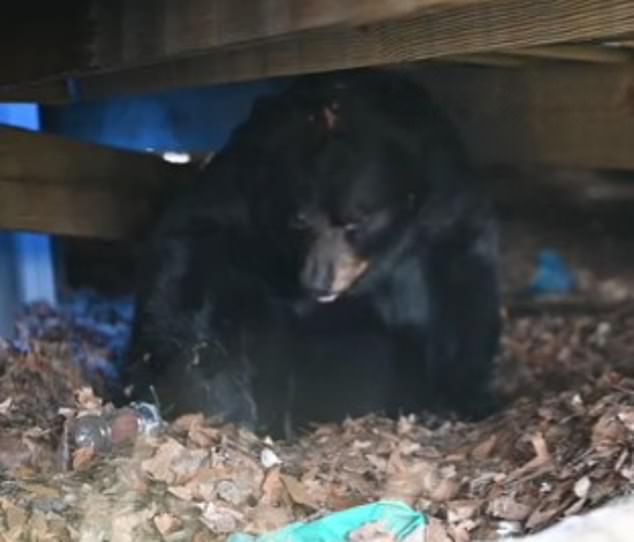 In new follow up videos, also posted to Marty’s own personal account, the groggy bear can be seen hunched beneath the wooden decking, amidst its bed of leaves 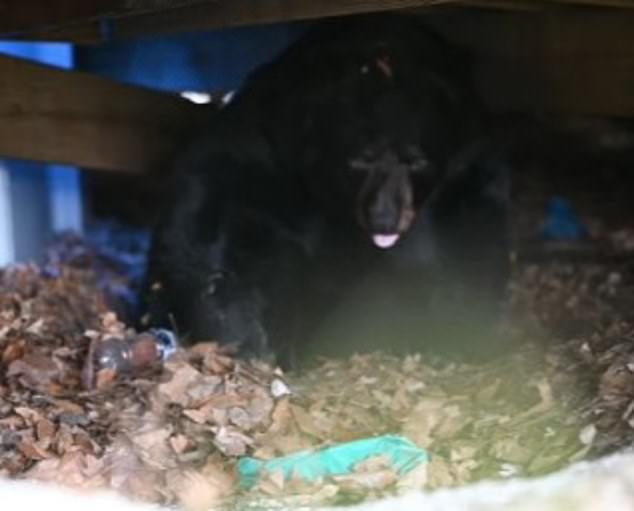 The video captures the bear still in the middle of its hibernation period, and is taken from a safe distance outside of the decking

In four Tiktoks posted to @marty.the.bear, videos show Marty’s hibernation progress, and have racked up tens of thousands of views.

Marty even has his own Instagram account, with a bio that reads: ‘hibernating until it’s hot girl summer’.

According to the Connecticut Department of Energy & Environment Protection, there has been a rapid increase in Connecticut’s black bear population over the past two decades. DEEP estimates there are currently around 1,000 of them roaming through the state.

Black bears are the smallest and most widely-distributed bear species in the United States. They are omnivores who prefer wooded habitats, and require between 3-8 months of hibernation, depending on the climate.