Covid vaccines are already preventing deaths in the UK and could be stopping nine out of 10 by the middle of March, scientists predict.

Modelling by medical experts suggests there will be a significant dip in the number of people dying of coronavirus next month as mass immunity begins to develop.

Reductions in hospital admissions will come later, dropping by two thirds by the second half of March, with intensive care admissions falling by 36 per cent.

Benefits of vaccination may already be reducing the death toll by as much as 10 per cent, the researchers suggested, but this is difficult to see in data because lockdown is also bringing the numbers down.

The impact of vaccines will affect age groups in reverse order – the same order they are vaccinated in – which dictates the data that will show changes first.

The average age of people dying from Covid is 83, the team said, while hospital patients are 73, on average, and intensive care patients 61.

When everyone over 60 has had a vaccine, deaths could be reduced by a staggering 96 per cent, with hospitalisations down 80 per cent.

A total of 13.5million people had received at least one dose of a Covid vaccine by today and the NHS looks on track for its target of reaching 15million by Monday.

A vast majority of people in the four most vulnerable groups – over-80s, NHS staff, care workers and the extremely vulnerable – are set to have been immunised by February 15, meaning they should be protected from Covid-19 by the start of March.

It will then take a further three to five weeks for the remainder of people in those groups who catch coronavirus before protection kicks in to die and be reported.

If the vaccines work as well as expected – almost total protection against death – deaths in those four groups should plummet from the middle of March onwards, the scientists suggest, and stay low. 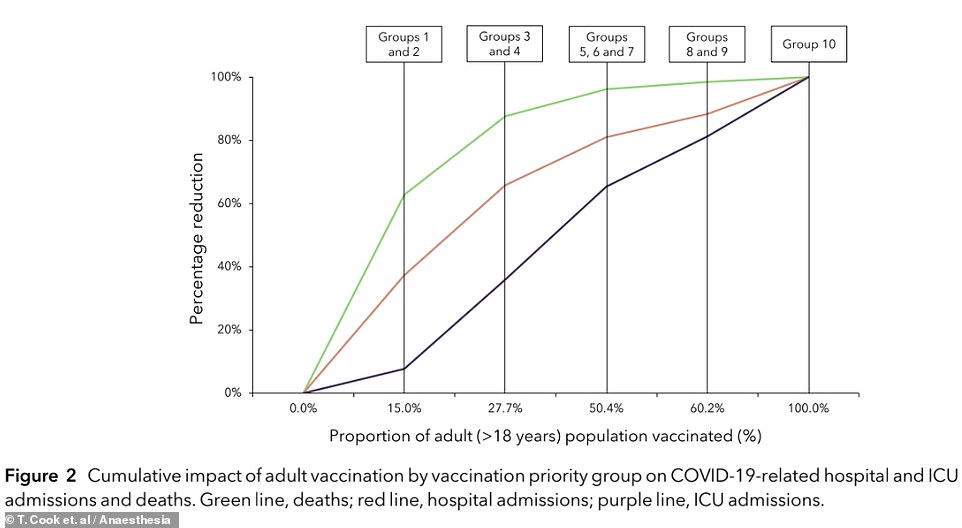 The researchers’ study showed that there will be significant reductions in Covid deaths (green line) as the first priority groups get vaccinated. Once priority groups one to four are immunised – a target set to be hit on Monday – deaths should fall by 90 per cent when their immunity kicks in two to three weeks later. Hospital admissions (orange line) and intensive care patient numbers (purple line) will be slower to come down because they have lower average ages and the people populating those groups will have to wait longer for vaccines 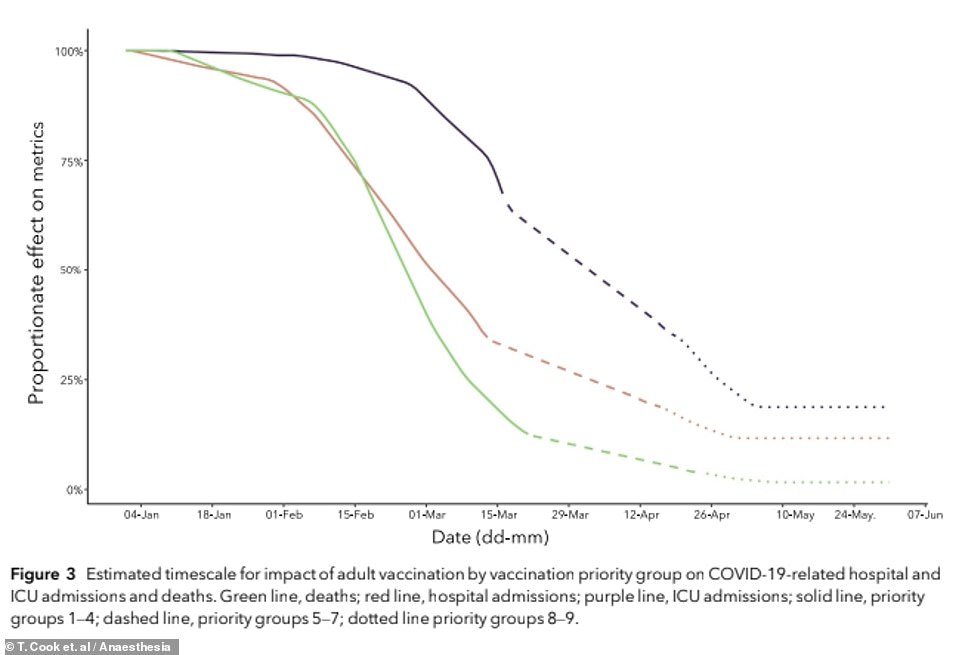 This graph shows that the impact of vaccination on data showing deaths (green), hospital admissions (orange) and intensive care (purple) will be sharp at first as the most vulnerable people are protected, but later into the year the impacts of vaccination will be less noticeable as people with a lower natural risk get immunised – among those people, there will be a less dramatic ratio of vaccines given to lives saved 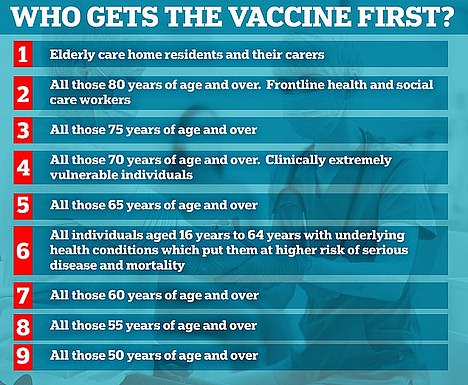 The study was done by Professor Tim Cook, an intensive care doctor and University of Bristol researcher; Dr Mike Nathanson, president of the Association of Anaesthetists; and John Roberts, an insurance consultant in the Covid-19 Actuaries Response Group.

The research assumes a best case scenario in which the vaccines are ‘particularly effective’ at preventing severe Covid-19 and uptake is close to 100 per cent in the high-risk groups.

They said: ‘The impact of vaccination on deaths due to Covid-19 will be much more rapid than the impact on hospital and ICU admissions.

‘Our model suggests that the impact of vaccination on daily deaths due to Covid-19 will be substantial throughout February and March.

‘The impact of vaccination on hospital and ICU admissions will initially be slower: these will not decrease substantially until late March, with reductions continuing throughout April.’

The reason deaths will decline so steeply – and first – is that elderly people make up a huge proportion of the deaths and are also the first to be vaccinated.

Professor Cook said the benefits of vaccination are likely already being felt among those who were first vaccinated, but it is difficult to prove at small numbers. The UK’s vaccine rollout began on December 8.

He told MailOnline: ‘Our model would predict that the fall in deaths becomes apparent about 34 days after vaccination is done, so we are now reaching the stage where we would be expecting vaccination to have reduced deaths by a little over 10 per cent – and, over time, this impact should increase rapidly.

‘Our model suggests that, compared to not vaccinating, the vaccine activity should reduce reported deaths by about 25 per cent in mid February and by more than half by the end of February.’

The NHS will start using an arthritis drug to treat hospitalised Covid patients after a breakthrough study found it cuts the risk of dying.

Tocilizumab can reduce swelling inside the organs and, when combined with steroid dexamethasone slashes the odds of death by up to 50 per cent. It can also cut the time spent in hospital by five days, results showed.

Oxford University scientists behind the RECOVERY trial found the drug reduced the risk of death by an extra four per cent, on top of the 20-35 per cent reduction given by dexamethasone.

This means one extra life could be saved for every 25 people given the drug, which is injected into a vein and normally used to treat people with rheumatoid arthritis.

The £600-a-time drug, branded as RoActemra, worked for patients reliant on oxygen masks and ventilators who had ‘evidence of inflammation’ in their internal organs. It was slightly more effective in the sickest patients, for whom it was already approved for.

Professor Peter Horby, an infectious disease expert leading the trial in NHS hospitals, said the results were ‘impressive’. Colleagues claimed the two drugs together had a ‘substantial impact’ on the survival chances of Covid patients.

There are currently still around 26,000 people in hospital with the disease across the UK, with around 2,200 still being admitted each day.

Slower progress for hospital and intensive care admissions data is linked directly to the ages of patients who account for them.

People in their 40s, 50s and 60s are the ones who make up a large hospital patients – the elderly tend to die faster or to be in care homes, and are rarely taken into intensive care.

Critical care patients are younger because doctors often decide not to put old people on ventilators because their bodies are too frail to handle the invasive treatment.

And, although the over-50s are next in line for vaccines after February 15, they are not likely have mass protection until later into April.

The researchers predicted that those groups could be mostly immunised by the end of March and their protection would kick in later in the spring, then leading to a dip in hospital admissions and intensive care cases.

The impact of these would be smaller, they explained, because their risk is naturally lower so there is a less dramatic ratio of vaccines given to lives saved.

Because of this, the NHS will still be under pressure from Covid-19 for at least another couple of months, the researchers said.

Dr Mike Nathanson said: ‘The huge pressure on all staff working in, and supporting, intensive care units will continue until at least the end of March.

‘The severe toll on wellbeing, the stress and the fatigue have all been well documented.

‘Further, with the acute care sector so busy, it is very likely that elective care cannot restart until after Easter at the earliest. The many, many patients whose surgery is on hold will continue to wait.’

The researchers said that, once the half of the population in the JCVI’s top seven priority groups – everyone over 60 or with a long-term health condition – has had a jab, priorities could be reconsidered.

They suggested pivoting the vaccine strategy away from age groups and towards jobs, protecting those most likely to catch and spread the disease, such as teachers.

They added: ‘The early prioritisation of healthcare staff and clinically vulnerable patients is likely to increase the impact of vaccination on hospital and ICU admissions and to also protect the healthcare service.

‘An inflection point, when 50 per cent of the adult population has been vaccinated – and when deaths have been reduced by 96 per cent and hospital admissions by 80 per cent – may be a useful point for re-evaluating vaccine prioritisation.’

The study was published in the medical journal Anaesthesia.