Wellington: Micronesia has become the final nation in the world with a population of more than 100,000 to experience an outbreak of COVID-19.

For more than two-and-a-half years, the Pacific archipelago managed to avoid any outbreaks thanks to its geographic isolation and border controls. Those people who flew into the country with the disease didn’t spread it because all new arrivals were required to quarantine. 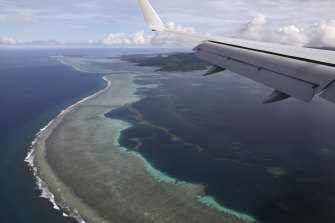 Pohnpei International Airport in Kolonia, Micronesia. Micronesia has likely become the final nation in the world with a population of more than 100,000 to experience an outbreak of COVID-19. Credit:AP

But as has been the case in several other Pacific nations this year, those defences couldn’t keep out the more transmissible Omicron variant forever.

On Tuesday, the government announced it had become aware of multiple cases across two of the nation’s four states.

Authorities said they had also found seven community cases in the state of Pohnpei. State leaders there have asked all residents to avoid public gatherings and to wear masks at all times.

The outbreak comes less than two weeks before Micronesia planned to end its quarantine restrictions and reopen its borders to the world on August 1.

Last year, Micronesia became one of the few countries to impose a broad mandate requiring all eligible citizens get vaccinated against the coronavirus. It threatened to withhold federal funds from any individuals or business owners who didn’t follow the rules, and as a result has had high vaccination rates.

Almost all nations in the world have now experienced COVID-19 outbreaks.

Turkmenistan is the only other country with more than 100,000 people that hasn’t reported any cases, although experts believe there has been a significant outbreak there that the autocratic leadership has chosen to ignore.

There have also been headaches for health officials trying to compile figures from North Korea.

In May, North Korea acknowledged it had a COVID-19 outbreak. Since then, it has reported nearly 4.8 million cases with fever symptoms, but in state media has identified only a fraction of them as confirmed COVID-19 patients, due in part to a lack of test kits.

Elsewhere in the Pacific, the Omicron variant has spread the coronavirus to several small nations for the first time this year, including Kiribati, Tonga, Samoa, Niue and Nauru.