At least one person has died and several others are in intensive care after attending ‘coronavirus parties’ in Italy in a deliberate attempt to catch the disease.

A 55-year-old man died in Austria last week after being infected a ‘corona-party’ in the province of South Tyrol, northern Italy, health bosses have said.

At least three more people, including a child, are now in hospital in the province after catching the virus at similar parties, including two who are in intensive care.

Health chiefs believe the people are anti-vaxxers who want to become infected to obtain a ‘green pass’, which is now a requirement of work in Italy.

It is thought the man who died in Austria may have worked across the border in Italy and therefore required a green pass. 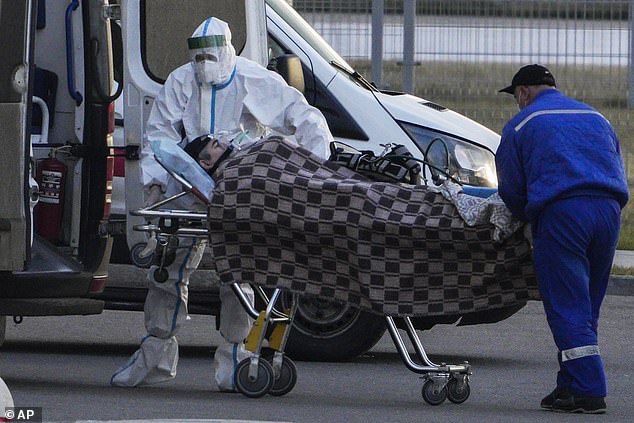 A 55-year-old man died in Austria last week after catching Covid at a ‘corona-party’ in northern Italy, health bosses have claimed (file image)

A pass can also be obtained by testing negative for the virus, but these passes only lasts 48 hours after which a new test must be taken at a cost of £12.60 per test.

Patrick Franzoni, co-ordinator of the anti Covid unit in Bolzano, made the revelation to Italian newspaper Il Dolomiti last week – leading to prosecutors opening a probe.

Deliberately spreading Covid is a crime in Italy under state of emergency laws that are currently in effect and due to last until at least December 31.

‘We have received more than one account from doctors of patients who admitted to having been infected on purpose,’ Franzoni said.

‘[They do this] to develop antibodies, and to obtain the green pass without vaccination,’ he added.

‘There are long-term consequences and even young people can end up in hospital.’

Franzoni said that children, who require a green pass to attend school if aged over 12, are being pushed into attending the parties by anti-vax parents.

He said that party-goers often meet in outdoor areas of bars, where the green pass does not apply, to hug, kiss and share drinks with someone who is infected.

Others have taken place indoors with people gathered around bed-ridden Covid patients in an attempt to ‘breathe in’ the virus.

Bolzano is among the Italian provinces being hit hardest by the winter wave of Covid, which has spread across the border from neighbouring Austria where infections are soaring and which has already gone back into a full shutdown.

Under ‘yellow zone’ rules, unvaccinated people would be required to wear masks in all public places, and to socially distance from others in restaurants, bars, theatres and other indoor venues. 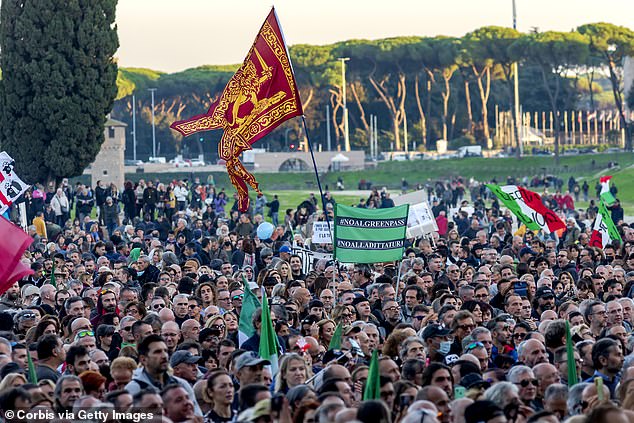 Italians demonstrate against expanded ‘green pass’ rules, which mean proof of vaccination or recovery from Covid is required to work

Italy first brought in its health ‘green pass’ over the summer, when similar passes were being discussed across Europe as a way to restart travel.

In Italy, the pass was also used as a way to reopen the economy post-Covid – with citizens told it was required to dine indoors, and to visit a range of other indoor hospitality businesses.

Since then, use of the pass has been gradually expanded – first to public transport, then to school teachers and university students, and then to all workers.

On October 15, staff at both private and public companies in Italy were told they would need a green pass to attend their place of work – though those with medical exemptions and who working from home are not included.

Anyone who misses work due to not having a pass for more than five days will have their employment frozen and pay suspended, the government said.