Pharmaceutical giant Johnson & Johnson and three opioid distributors agreed to pay a combined $US26 billion ($35 billion) to resolve thousands of state and local government lawsuits over the handling of addictive painkillers that created a US public-health crisis.

Drug-overdose deaths in the US rose nearly 30 per cent in 2020 to a record high – 93, 331 deaths, according to estimates released last week by the Centres for Disease Cpntrol and Prevention, up from 72,151 deaths in 2019.

“There’s not enough money in the world frankly to address the pain and suffering,” said Connecticut Attorney General William Tong, adding that the money will “help where help is needed”. 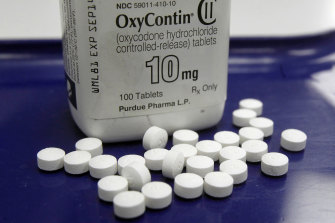 The drug distribution companies still deny that they turned a blind eye to the quantities of opioids being traded on the black market. Credit:AP

The deal was the second-largest cash settlement ever, trailing only the $US246 billion ($334 billion) tobacco agreement in 1998.

Attorneys general from 15 states were involved in negotiating the deal.

The landmark deal – years in the making – calls for distributors McKesson, Cardinal Health and AmerisourceBergen to pay almost $US21 billion to resolve allegations they turned a blind eye to suspiciously large opioid shipments, the companies and state attorneys general said Wednesday. J&J will pay $US5 billion to settle claims it illegally marketed opioids, which it stopped making last year.

The settlement marks a major step forward in litigation over the highly addictive drugs, which have been blamed on more than 500,000 deaths over two decades. States, cities and counties filed nearly 4,000 suits against more than a dozen drug makers, distributors and pharmacies seeking compensation for billions spent battling the opioid epidemic.

“While no amount of money will ever be enough, this settlement will force these drug companies to pay a historic amount of money to bring much-needed treatment and recovery services to North Carolina communities and to change their business practices so that something like this never happens again,” said North Carolina Attorney General Josh Stein, who was among the state negotiating group.

More than 40 states are expected to participate in the deal, Stein said during a press conference with other attorneys general. Some early adopters already include California, New York, Ohio, Massachusetts, Virginia, Tennessee, Louisiana, Pennsylvania, Connecticut, Delaware and Virginia.

States that weren’t part of the negotiating group get 30 days to sign onto the deal and several have already announced they will. They’ll then have 120 days to get their local governments on board with accepting cash to drop their lawsuits, with bonuses paid by the companies to get more to sign up. That process has already begun in many states. New York Attorney General Letitia James said she expects the “vast majority” of her state’s communities will sign up.

The companies said they are confident the accord will resolve a substantial portion of their opioid liabilities.

“This settlement will directly support state and local efforts to make meaningful progress in addressing the opioid crisis in the United States,” Michael Ullmann, J&J’s general counsel, said in an emailed statement.

A “critical mass” of states needs to back the deal or it will fall apart, Joe Rice, one of the lawyers representing states, cities and counties, said in a press conference. He didn’t say how many are states or local governments are required to keep it alive.

Every day that goes by without money for treatment just prolongs the pain of the opioid epidemic that has only gotten worse during the pandemic, Louisiana Attorney General Jeff Landry said during a press conference. “States that don’t sign on are really being unreasonable.”

Washington State Attorney General Robert Ferguson rejected the offer, saying what the four companies offered is too paltry to adequately address the harm they’ve caused. For the 320 local governments in Washington, the state’s share would total more than $US527 million ($715 million), but that would be just $30 million a year ($40 million) for 18 years.

“Jurisdictions that have gone to trial against these companies have done far better than this agreement,” Ferguson said in a statement, adding that a judge has set a January trial date for his suit against J&J.

Hard-hit West Virginia had already signaled it will not participate in the settlement. Local governments in the state are pursuing a case that is on trial against distributors. Closing arguments are scheduled for next week.

“As of now, West Virginia is very likely a ‘no’ on these agreements,” state Attorney General Patrick Morrisey said.