An elephant has killed a zookeeper by hitting him around the head with its trunk before slamming him into the bars of a cage.

Joaquin Gutierrez Arnaiz, 44, was struck by a female elephant while cleaning its enclosure at the Cabarceno Natural Park near Santander, Spain.

It is thought the blow knocked the care taker backward and he hit his head against the pen’s iron bars, the Cantabrian regional government has said.

He was rushed to hospital after being assisted by two colleagues but died around three hours later.

Tributes have since poured in for the animal handler with police now investigating his death. 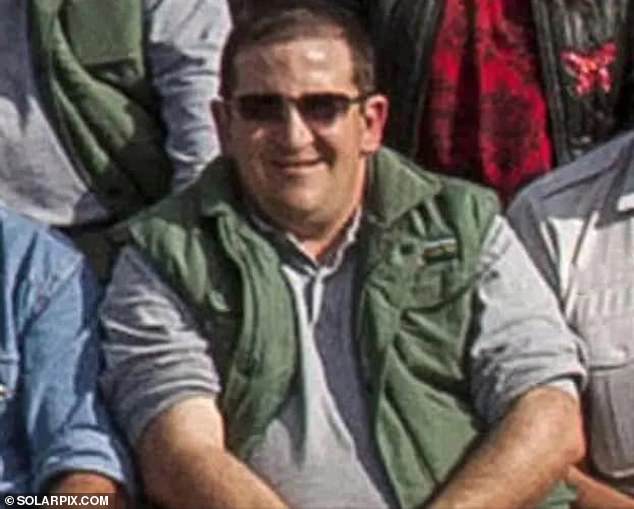 Joaquin Gutierrez Arnaiz (pictured), 44, was struck by a female elephant while cleaning its enclosure at the Cabarceno Natural Park near Santander, Spain

Arnaiz had been on duty when he received a single strike from the elephant weighing more than four metric tones.

The elephant that struck him had a foot infection and is likely pregnant, according to a statement by tourism chief Javier Lopez Marcano.

Marcano, paying tribute to Joaquin who started working at Cabarceno in 2002, described him as one of its most veteran elephant keepers.

He added: ‘We are deeply shocked. The loss of such a young and popular person has caused great pain.

‘He was a great lover of elephants and his work.’

It has been described as the ‘first fatal accident’ of its kind in the park’s 30-year history. 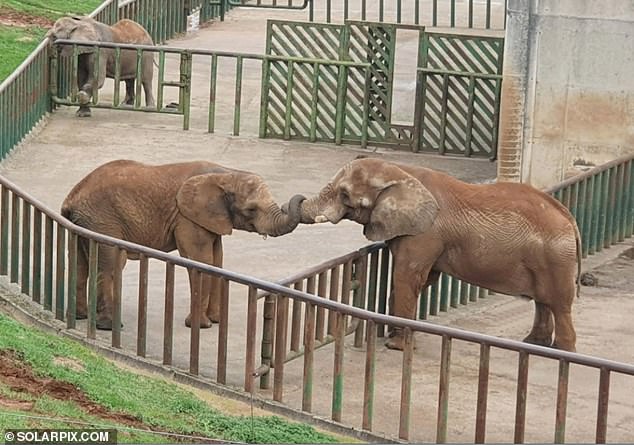 Arnaiz’s bosses confirmed in a statement: ‘A worker at the Cabarceno Natural Park has died after being hit by one of the elephants.

‘The accident occurred at 8.30am on Tuesday outside the stables of the pachyderms as daily cleaning and release of the animals began.

‘Joaquin Gutierrez Arnaiz, 44, was in an intermediate security corridor the elephants use to enter and exit their stables in an orderly fashion when he was hit by the elephant’s trunk.

‘The elephant is a female who was with her calf in one of the large yards. Joaquin hit his head against the enclosure railings as he fell.

‘Two colleagues who were with him dialled 999 and Joaquin was transferred to hospital by ambulance. He died at 11.15am.

‘Police and Civil Guard have been to the park and initiated an investigation to clarify the cause of the accident.

‘Joaquin’s death has caused great commotion among his colleagues and Cantur, the publicly-owned company which manages the park.

‘This is the first fatal accident that has occurred at Cabarceno Natural Park in 30 years.’ 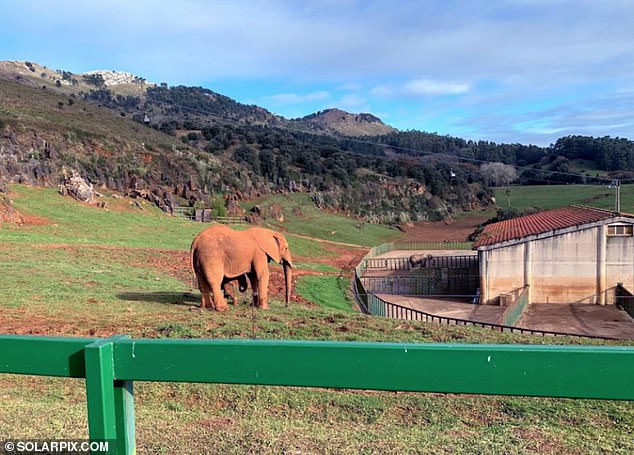 Arnaiz had been on duty when he received a single strike from the elephant, which weighed more than four metric tones, while cleaning the enclosure (pictured) at the park

Cantabrian president Miguel Angel Revilla said: ‘Nothing like this had ever happened. Joaquin was an extraordinary person. Rest in peace.’

Well-wisher Mery Bravo added: ‘Rest in peace, What a tragedy.

‘However experienced you are you can never lower your guard. Animals react out of fear or to protect their young. My condolences to Joaquin’s family.’

Alberto Puche Hernandez said: ‘Animals are unpredictable. I’m sure Joaquin enjoyed looking after them. This is a real tragedy. My sincerest condolences to his family.’

Friends and colleagues also paid tribute to Arnaiz in a midday ceremony at the park.

Cabarceno Natural Park, which acts as an international centre of reference in the reproduction and care of African elephants, is located in a former open-pit iron mine.

Cantur, the tourism company which manages it, is owned by the regional government of Cantabria. 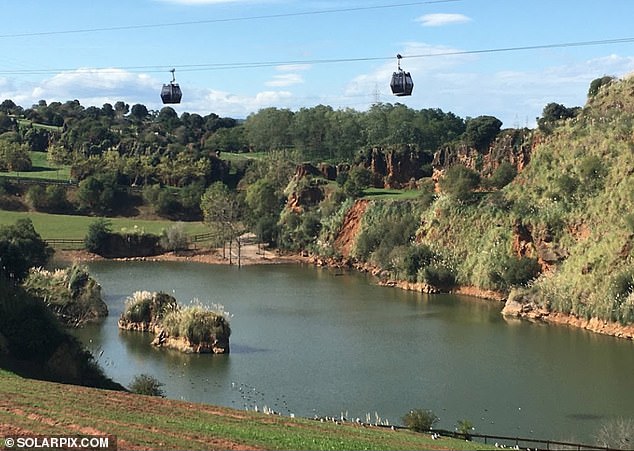 The park is home to almost 120 animal species and its natural scenery includes gorges, lakes and rock formations (pictured)

The park is home to almost 120 animal species including wolves, tigers, lions and jaguars from five continents living in semi-captive conditions, including large enclosures where one or more species co-exist.

The natural scenery of the park includes gorges, lakes and rock formations.

The park collaborates in behavioural studies of the male African elephant via non-invasive methods to further understand the reason for high aggression shown by male elephants at certain times of the year.

The 46-year-old suffered a head injury, chest trauma with multiple fractures and and two broken arms.