Harry and Meghan’s Netflix mischief increases the pressure on King Charles to retaliate.

Might he remove his son’s Royal Victorian Order knighthood (KCVO), given to him by the Queen in 2015 for ‘services to the sovereign’?

All senior royals have it (except William, who will one day become head of the order).

Courtiers feel that Harry has forfeited the right to an honour that is in the personal gift of the monarch. 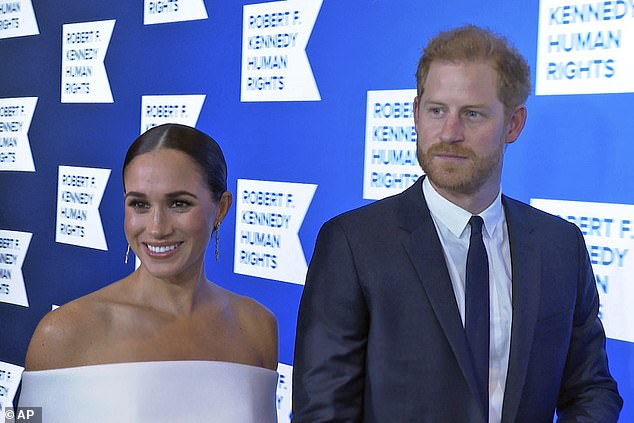 Harry was bestowed the award in 2015 by the late Queen Elizabeth II, but courtiers are demanding that the King remove it

What about Meghan? The Queen never got round to giving her the Royal Family Order, awarded only to the monarch’s closest female family members.

Odds on Charles won’t be bestowing the honour on the Duchess of Sussex.

As a university student, shadow chancellor Rachel Reeves was an avid Gordon Brown fan, confessing: ‘For my birthday my friends bought me a framed picture of Gordon. He was wearing a suit and a red tie. He does not know. Don’t tell him.’

My lips are sealed.

Unassuming David Jason surprised a visiting TV crew when he asked for a cup of coffee.

‘They said, “Oh, right. Some people want something a little more. Joan Collins, for example, has to start the day with a glass of champagne,”’ he says.

‘You start to think, “God, how pretentious is that?” I could have said, “I must have a light and bitter please!”’ As Del Boy might remark: Bonnet de douche! 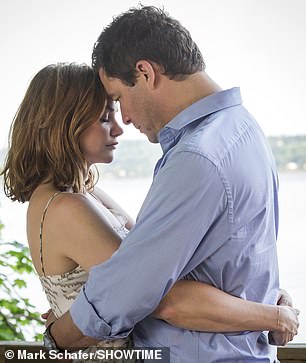 Ruth Wilson’s gratuitous sex scenes with Dominic West in The Affair were a factor in her quitting the hit TV show, with Radio Times asking if an intimacy coordinator might have helped.

‘Yes, I think so, because people are uncomfortable talking about sex,’ says Ruth, pictured.

‘It’s important to have someone you can talk to about your concerns, your worries or limits, things you don’t want to show.’

Did her screen sex partner Dominic stoically struggle through without demanding a coordinator?

With Sir Elton John confirmed to headline Glastonbury, Prince Philip’s biographer Gyles Brandreth recalls sitting with the duke before a performance by the Rocket Man.

After prolonged losses on Broadway, Phantom Of The Opera producer Sir Cameron Mackintosh is enjoying his highest grossing box office of nearly £2million a week.

‘There comes a point when you become theatrical wallpaper,’ he says after announcing the show will close in February after 35 years.

‘The reason it is now sold out is because it’s coming off.’

Milky Bars on Cameron this Christmas!

Apropos Brideshead Revisited TV producer Derek Granger’s lack of royalties for his work on the script, spare a thought for the late Raymond Cusick, who created Doctor Who’s Daleks and, as a BBC employee, failed to get a penny in royalties.

He left the BBC in 1966, unhappy with the lack of recognition, receiving an ex gratia payment of £100. And a Blue Peter badge!