Revealed: ‘First image of F35 jet as it was reclaimed from the sea’ after crashing into the Mediterranean on take-off, sparking international race to find it

The first image of the F35 that toppled into the Mediterranean Sea during a failed takeoff from HMS Queen Elizabeth has emerged online.

The jet suffered a malfunction while accelerating up the ramp of the flight deck before the pilot ejected when the plane reached the top.

The incident triggered a frantic underwater race to find the wreckage of the stealth jet and secure the crash site a mile below the surface before Russian divers could get there first. 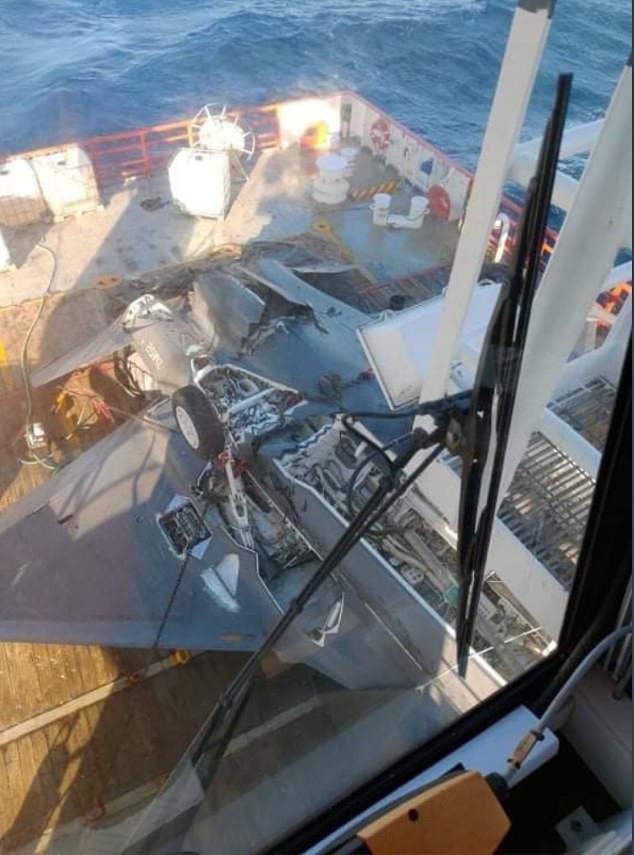 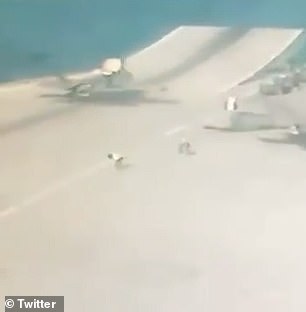 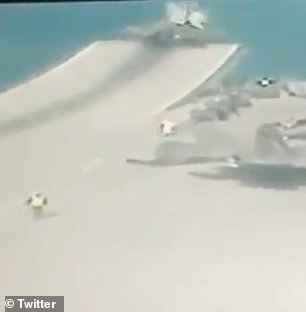 A month later, the £100million warplane was retrieved in a secret salvage operation carried out by British, American and Italian crews, to prevent its sophisticated radar and sensors falling into the wrong hands.

An image of the reclaimed F35 lying on the deck of a boat has now been widely shared online.

The wreckage was then said to have been taken to a naval base in the Mediterranean after its recovery.

The Ministry of Defence have not verified the image but did not deny its legitimacy to MailOnline.

They said in a statement: ‘Recovery efforts of the ditched F35 successfully concluded in December 2021.

‘The Defence Accident Investigation Branch are currently conducting an investigation into the causes of the incident and will report their findings in due course.

‘We cannot comment further while the investigation is ongoing.’ 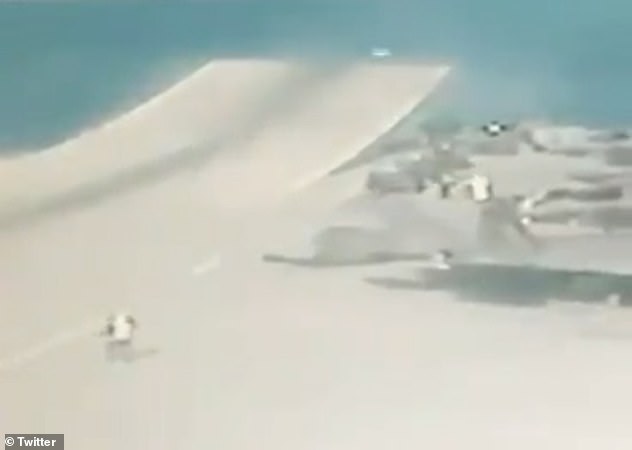 While the cause of the crash is still under investigation, but it is thought that a red plastic rain cover for the jet was accidentally left on and sucked into an engine.

Leaked footage of the incident was also spread online, prompting an internal investigation with a sailor ending up arrested for sharing the confidential material.

While it did not reveal any operationally sensitive material, the video is said to have angered naval chiefs who flew the arrested sailor back to the UK.

Lockheed Martin says the F-35 ‘is the most lethal, survivable and connected fighter aircraft in the world, giving pilots an advantage against any adversary and enabling them to execute their mission and come home safe.’

But the stealth fighter has been involved in a series of high-profile crashes and incidents in recent years.

Earlier this month, a South Korean pilot was forced to make an emergency ‘belly landing’ in an F-35A after suffering a malfunction in the air. 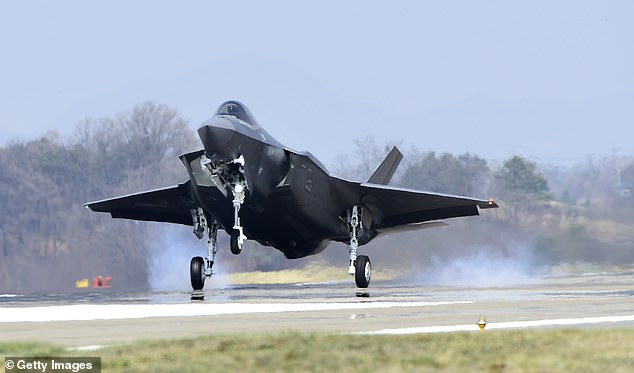 A pilot was forced to make an emergency ‘belly landing’ in a South Korean F-35A fighter jet after suffering a malfunction in the air. Pictured: A South Korean fighter jet lands in Chungju in 2019

Landing gear on the jet failed to extend but instead of ejecting, the pilot decided to land the US-made craft at an airbase on its belly.

The equipment failed due to electronic issues, a South Korean Air Force spokesman said, forcing the pilot to take the unprecedented action.

A military official refused to confirm if the jet suffered any damage in the incident but the pilot walked away uninjured.

The jet has been involved in seven other incidents including a pilot who was forced to eject after a crash on landing at Eglin Air Force Base in Florida.

The US Air Force said the pilot and plane systems were at fault for the crash.

A Japanese F-35 also crashed into the Pacific Ocean near Japan, which killed its pilot in 2019. Officials blamed the crash on spatial disorientation.

How the F-35 has been plagued with problems

The delivery of the RAF’s new, US-built F-35B Lightning II Joint Strike Fighter in July 2021  marked a rare moment of celebration in what has been a troubled project.

The ‘fifth generation’ fighter aircraft is the world’s most expensive weapons system, though costs have finally stabilised at an eye-watering $406billion.

Manufacturer Lockheed-Martin agreed to cap costs after US President Donald Trump criticised the project and even tweeted support for a rival aircraft.

Britain is currently embarked on a £9.1billion programme to purchase 48 of the F-35s, from American aviation giant Lockheed Martin, by 2025.

One of the first four F-35B Lightning II aircraft arrives at RAF Marham in Norfolk on June 6, 2018

America enticed its Nato and other allies into sharing the cost of the aircraft by offering input into manufacture and 15 per cent of each one is comprised of parts from British companies while some of the jets will be made in Italy.

But the planes have been plagued by a catalogue of problems which have sent costs soaring.

There are fears about shortcomings in the technical systems underpinning the new generation of war planes will leave them unable to function properly.

The true cost of the British planes delivered this year is estimated to be over £150million each to cover ‘extras’ such as software upgrades and spare parts.

There are also concerns plane’s software system is vulnerable to cyber-attack and cannot be tested independently by the UK.

The problems are not helped by the department responsible for the computer networks essential to the aircraft’s operation needs to find savings of £400 million this year.

The reports into the costs and other problems prompted the Defence Select Committee to launch an inquiry into the project.

It reprimanded the Ministry of Defence for keeping parliament and the public in the dark about the costs.

The MoD has so far refused to provide the estimated cost to the UK of buying the F-35, beyond referring to a National Audit Office which used the £9.1billion figure.

MPs said ‘it is simply not acceptable for the MoD to refuse to disclose to parliament and the public its estimates for the total cost of the programme’.

Though the cost of the F-35 has been the focus of attention, there have also been embarrassing reports of operational shortcomings emerging from the United States.

In a mock air battle in 2015, the cutting edge plane was defeated by an older generation F-16, a plane designed in the 1970s.

Overheating, premature wear of components in the vertical tails and vulnerability to fire were also found to be issues.

The US Air Force temporarily grounded dozens its F-35 stealth fighters while it investigated an oxygen supply issue.

The Marine Corps, who also operate the same F-35B model the UK has purchased, was forced to ground its planes after flaws were found in the  computer system.