Authorities in Florida have determined that the fatal shooting of a teenager who pointed what turned out to be an air rifle at passing cars and responding officers was justifiable homicide.

An investigation found that all the officers involved in the Oct. 16 shooting of Alexander King acted within their legal duties after the 16-year-old repeatedly refused their orders to put down the weapon, Pinellas-Pasco County State Attorney Bruce Bartlett said in a letter released Monday.

Officers were responding to reports that the teen was pointing the rifle at passing cars in Tarpon Springs, near St. Petersburg on Florida’s Gulf Coast. 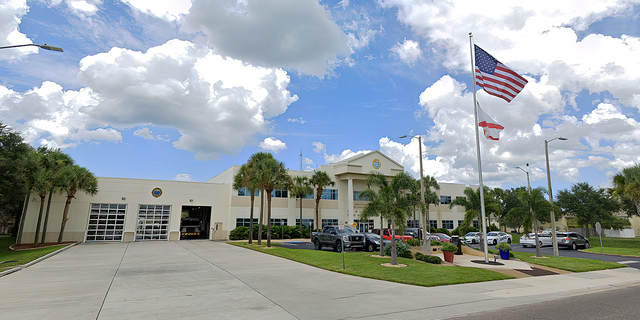 This photo shows the Tarpon Springs Police Department. Recently, authorities in Florida determined that the fatal shooting of a teenager was justified.
(Google Maps)

King was carrying an airsoft rifle that appeared to be a deadly weapon except for a “faded orange tip” that the officers couldn’t distinguish from a distance, according to Bartlett’s letter, which was addressed to Tarpon Springs Police Chief Jeffrey Young.

The names of the two officers who shot King, along with five other officers at the scene, won’t be released because they invoked their right to remain anonymous under Florida’s Marsy’s Law.

According to the investigation, King pointed the rifle at the first officer who arrived at the scene that night. The officer took cover behind a vehicle and called for backup.

The officer said he heard King yelling, “Shoot me, shoot me,” the letter said.

Two of the responding officers said they were afraid King was going to shoot them or someone else, so they shot him, four times, the investigation found. He was pronounced dead a short time later at a hospital.

Cellphone video taken by a witness corroborates the officers’ account, the letter said: It shows King pulling the slide back and charging the rifle.

In 2019, he was removed from Tarpon Springs High School due to a sheriff’s office threat assessment. The report said he was seen drawing pictures of knives, guns, German soldiers and swastikas, and seemed to enjoy the uneasiness his behavior caused some students.

King had been diagnosed with attention deficit hyperactivity disorder, oppositional defiant disorder, depression and bipolar disorder, and had been hospitalized against his will for mental health reasons seven times. He also previously confronted police — while carrying knives — and was subdued with non-lethal pepper balls.

His sister, Kelly Greenawald, apologized in a Facebook post to anyone King may have scared, but she believes he never intended to hurt anyone. She said he had battled mental illness since he was 3, a year after being adopted, the Tampa Bay Times reported.

She told investigators that King was upset on the evening of Oct. 16, and left home after threatening to kill himself, the letter said.