Home » World News » ‘Free to be yourself’: Melbourne’s queer community out and proud at Midsumma

It was sunshine and plenty of rainbows at Melbourne’s annual Midsumma Festival on Sunday, marking the major LGBTI event’s 35th anniversary.

More than 120,000 people packed into Alexandra Gardens on Sunday for the opening event of the three-week festival, which showcases the best of queer art and performances. 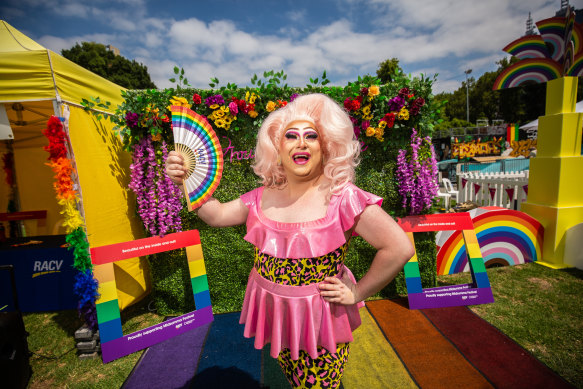 Freida Commitment at the Midsumma Carnival on Sunday. Credit:Scott McNaughton

While some punters browsed the hundreds of stalls and danced to the DJ sets, others competed in the Queerlympics, testing their mettle in games of tug of war and limbo.

Dressed to the nines in a flowy magenta dress and matching feathered headpiece, drag queen Mama Crass said the event gave queer Melburnians the chance to celebrate what makes them unique.

“What I love about this day is that it’s about acceptance – we can come out and we can band together over our differences … there’s so many people who love to categorise us, but in actual fact, the gay community is not that easily categorised,” Mama Crass said. 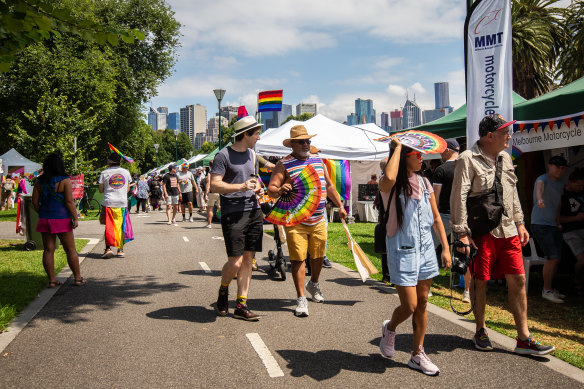 Crowds soaking up the sunshine on the first day of the three-week long festival. Credit:Scott McNaughton

Kids at the free, all-ages event were kept entertained with circus performers, Auslan-interpreted story times and free skate lessons. The event also had a strong emphasis on connecting the LGBTI community with sport, with talks from paralympic rower Al Viney and AFLW players.

After 30 years of attending Midsumma, David Bell said he appreciated the family-friendly nature of the carnival, having brought his 10-year-old son Nathan along for the festivities.

“The fact that we can be here and no-one really cares anymore, it’s great,” he said.

More than 200 events will take place across Melbourne and regional Victoria for Midsumma this year, including the popular Pride March down Fitzroy Street in St Kilda on February 5. 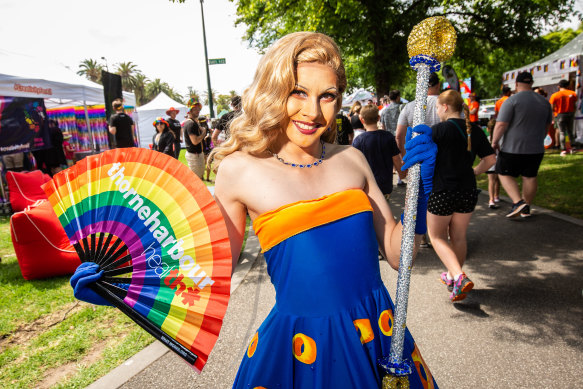 Thousands will converge on Smith and Gertrude streets in Collingwood on February 12 for the festival’s final night street party, featuring performances from Casey Donovan, Banoffee and Chela.

Rhys Anderson-Marten and Aimee Ballard made the journey from Traralgon in Victoria’s east for Sunday’s festivities. The constant stream of glitzy and glamorous outfits on display was their highlight.

“Everyone’s just really free to be themselves without judgment,” Anderson-Marten said. “I love to come down every time it’s on — it’s just the best time of year.”