Terrifying video and pictures have emerged a French fighter pilot being tied to a target on a firing range as jets screech overhead during a brutal hazing ritual.

Images show the man tied to a target on the island of Corsica with a bag over his head during the traumatising stunt, which took place in March 2019.

Footage then reveals the man with his hood removed but still bound to the target, as jets make low passes above him while machine-gun fire can be heard.

More video shows the man being forced to hop uphill with his arms and legs bound, while a still image included in the footage shows him tied up in the back of a truck.

The film and photos were both released this week by the pilot’s lawyers as part of a lawsuit he has filed against the French military. 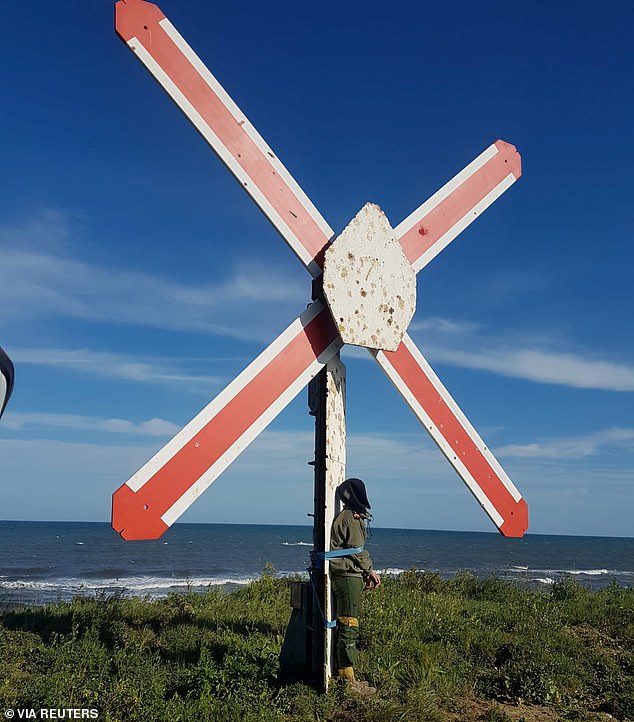 This image, said to be shot March 2019 at Solenzara Air Base, Corsica, France, shows a man tied to a target on a firing range who French lawyer Frederic Berna identifies as his client 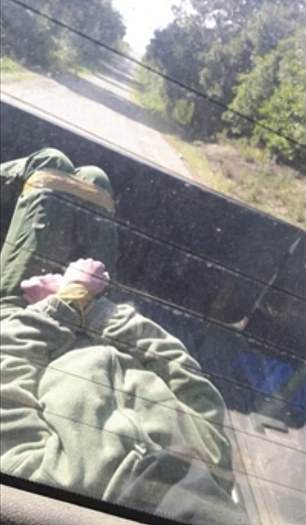 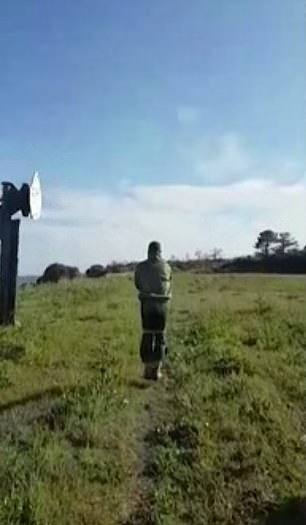 The pilot is seen on video tied up, transported in the back of a truck and made to hop over to the target

Court documents say the hazing occurred at the Solenzara air base on the French Mediterranean island of Corsica, shortly after the man arrived as a combat pilot.

As part of the hazing, the pilot says a hood was placed over his head and he was forced into the back of a truck which took him to the firing range.

He was then attached to one of the targets by heavy-duty nylon straps while jets passed by overhead.

Frederic Berna, the pilot’s lawyer, said the hazing was organised and carried out by other service members, who were the ones filming and recording it. 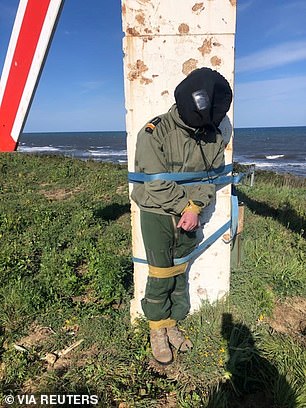 The pictures and videos were then shared on WhatsApp, before being forwarded over to the victimized pilot.

He raised the issue with his superiors at the end of 2020, Berna said, then decided to file a criminal complaint when he felt the military was not responding adequately.

Colonel Stephane Spet, a spokesman for the French air force, said the issue was first raised with the military in January this year, and that those involved were punished.

Spet said some of those involved were restricted to barracks – a punishment that usually involves a person being placed in isolation and barred from all activities except work, while wearing some kind of symbol as a mark of shame.

But the punishment is typically non-judicial, meaning it will not appear as part of a soldier’s record.

Spet refused to say how many people were punished in this way, or how long their punishment lasted. He said an inquiry has also been ordered.

Spet added that videos of the incident give the ‘misleading impression’ that the pilot was in danger from live munitions being fired.

He said the sound of gunfire in the videos is in fact coming from an adjacent range, and the closest a live round came to the tied-up pilot was half a mile away.

‘The pilots responsible for staging this were severely punished in April 2021, with measures that went as far as restriction to barracks,’ Spet said.

Berna said neither he nor his client had any knowledge of any punishment imposed on service personnel over the incident.

In a separate statement, the air force said it condemned any actions that harm the physical or mental wellbeing of its personnel, and that it would cooperate with any criminal investigation.

A spokeswoman for the Solenzara base referred Reuters to the air force statement.

The complaint was filed with the state prosecutor’s office in the city of Marseille on May 5, according to Berna.

The lawyer said his client is still in the air force and serving as a pilot but is no longer a combat pilot.