Home » From the Archives, 1966: Crowds block firefighters from Collingwood blaze

Damage, including the loss of the 88-year-old building was estimated at $1 million. 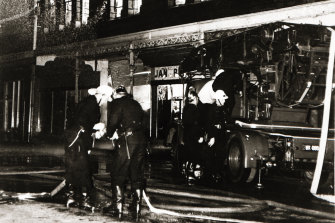 Scores of police had to evacuate shops and a nearby hotel and keep back the crowds.

One of the houses was badly damaged and four others were slightly damaged.

Scores of people trying to save personal belongings, trunks and random pieces of furniture tangled with the sightseers.

In the midst of the turmoil several small children became seperated from fleeing families and confronted police with one more problem. 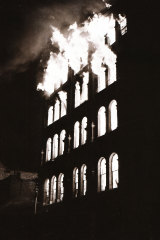 Street to all traffic and streets around the area became hopelessly blocked by sightseers, evacuees and drivers trying to find alternative routes.

A fireman, Ken Johnson, 36, who climbed a 120 ft. extension ladder even though he had sprained his left ankle, was later admitted to St. Vincent’s Hospital.

Thirty-five minutes after the fire started at 5.30 p.m., firemen and spectators were forced to run for their lives as the rear wall collapsed.

Five minutes later the side wall collapsed in a sheet of flame and a large crack appeared in the façade.

In an effort to get spectators to move back police warned that if the front wall collapsed it would bring down tram and power lines.

“We cannot guarantee that all the lines are dead,” they shouted through loudspeakers.

The warning helped to force back the crowds.

The fire was first noticed at 5.30 p.m. by Mr Emannuell Ebjer, 55, carpenter, of Gore Street who gave the alarm.

Within minutes large stores of wool and nylon goods were blazing.

Ten minutes after the alarm 20 units and 50 firemen were fighting the blaze under Chief Fire Officer Jack Peterson.

The fire crews were backed by 25 policemen and an ambulance unit waited in Webb Street.

The fire quickly spread to the lower floors and strong gusts of wind swept showers of sparks over scores of small terrace houses in Little Smith and Gore Streets.

For the next two hours the scene was chaotic.

Fire units had to force their way through heavy traffic as hundreds of sightseers crowded across the roadway blocking the vehicles.

Strong winds hampered the brigade from putting up a 120 foot apparatus for about 20 minutes.

But another team managed to move a smaller 80-foot unit into place to stop the fire from spreading to the top floor of other buildings in the street.

The front wall held, but twice firemen had to be ordered back for fear it would collapse.

The huge volume of water used to combat the fire also caused severe damage to nearby buildings.

The police arson squad was also called in to investigate the cause of the fire.

The street barricades – from Gertrude to Webb streets – remained up overnight, and tram services are not expected to return to normal until late today.