Home » World News » From the Archives, 1967: US spacecraft missing in the Australian outback

Light aircraft are being chartered to search an area in Western Australia for the missing U.S. spacecraft, Biosatellite 1. 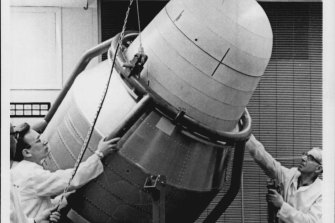 Biosatellite 1 undergoing tests via to launch.Credit:UPI via NASA

The Department of Supply is chartering the aircraft at the request of the U.S. National Aeronautics and Space Administration (NASA).

The Minister for Supply (Senator Henty) said yesterday the search area was about 300 miles north-east of Perth.

The area is sparsely populated and covered mainly with low brush, swamps and dry lakes.

Two or three light planes are expected to start the search today.

Centre of the search area is a 40 by 100-mile area between Lake Barlee and Lake Moore.

The Biosatellite was launched from Cape Kennedy, Florida, on December 14 last year. It was designed to come down after three days in orbit. However, its retrorocket system failed the craft stayed aloft until it fell naturally out of orbit on Wednesday.

The satellite carried thousands of tiny organisms, plants and other specimens to test the effects of weightlessness on them. 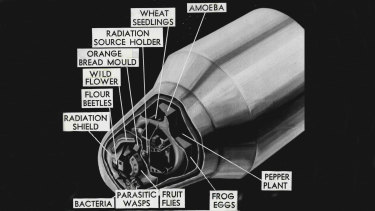 A drawing of America’s Biosatellite I, the spacecraft that crashed in the WA outback.Credit:NASA

Mr Henty said the capsule might have descended on a 34-inch bright orange and white parachute which would probably lie bunched to one side.

If the capsule were found, it would be left intact to preserve the maximum experiment and engineering value.

NASA had assured the Government that the contents of the satellite – mainly insects and seeds – were completely harmless and almost certainly dead.

There was no hazard to the finder unless he forced the capsule open, broke the small compressed air bottle or its fittings or opened the steel sphere, which contained a minor radiation source.

An initial search on Wednesday was call off after U.S. air force planes had fruitlessly criss-crossed thousands of square miles of the Australian continent and the Pacific and Indian Oceans.

The decision to resume the search was made after scientists had made further analysis of signals from a radio beacon picked up by a U.S. aircraft flying over Australia about the time the capsule should have been making the final stage of its descent by parachute.

NASA at first discounted the possibility that the signal came from the capsule because it had the wrong modulation or “signature” and was being transmitted on a slightly lower frequency than expected.

On reconsideration, however, it was decided that the differences could be accounted for by deterioration of the capsule transmitter during its two-month space flight.

“At least we hope that is the case,” a NASA spokesman said.