Home » World News » From the Archives, 1987: Hawke pledges no child living in poverty

The Prime Minister, Mr Hawke, yesterday pledged that by 1990 no Australian child would be living in poverty. Mr Hawke said that this would be Labor’s first goal if it won a third term. 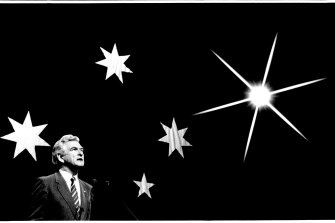 Bob Hawke on stage at the Sydney Opera House for the Labor Party campaign launch on June 23, 1987.Credit:Robert Pearce

Mr Hawke pitched his appeal to the electorate on a platform of economic responsibility and a modest base of promises, primarily directed at poor families, costing $469 million in a full year and nearly $303 million next financial year.

He said the Government’s program of family help would lift more than one million children into security and “help more than half a million Australian families in greatest need, the hardest pushed, the most disadvantaged”.

A new “family allowance supplement” would be paid to mothers, on the basis of family income and size. It would provide an extra $5 a week over existing assistance, taking the payment to $22 a week, plus an additional $6 a week for children between 13 and 15 years old. 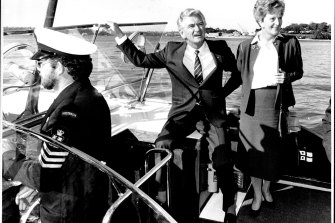 Full payment would be made where the family income was below $300 a week (plus $12 per child), reducing with higher incomes. A family with three children under 13 would continue to receive some family allowance supplement until family income exceeded $456 per week. For families renting privately, the benefit would not cease until income levels were $30 a week higher.

Families with disabled children would get a disability allowance of $112 a month, free of means testing.

Most of the family changes would start from 1 November. The family measures would cost $256 million next financial year and $405 million in a full year.

Mr Hawke’s promises and those of the Opposition Leader, Mr Howard, are sharply differentiated. Although the Howard package would bring big benefits to higher and middle income earners, the Government’s measures are directed almost totally at lower income people.

Mr Hawke pledged that his Government would “continue and intensify our undivided efforts” to renew and revitalise Australia’s economy.

But his Government would not jeopardise Australia’s future by irresponsible promises.

“We make our future undertakings on the firm basis of the achievable, the credible, the responsible.”

The latest Morgan poll in today’s ‘Bulletin’, shows Labor in a comfortable position. The poll, taken last weekend, has Labor up one point to 49 per cent and non-Labor down one point to 43 per cent. The approval of Mr Howard has fallen six points to 31 per cent. A poll on the promised Liberal tax cuts was also disappointing for Mr Howard, with about 50 per cent against them and only about 41 per cent in favour.

At Labor’s launch, the Prime Minister renewed his reassurances about the September budget no new taxes and no tax increases.

Mr Hawke said Labor would bring in a budget deficit of less than one per cent of gross domestic product in 1987-88. Labor would not increase the share of GDP taken as tax revenue over the life of its next term.

The Government would pay for its campaign promises by cuts to minor departments not dealt with in the mini-budget, further savings from the Public Service, and from greater-than-expected savings from discretionary measures already taken to crack down on welfare cheating and tighten eligibility rules for the dole.

The Government promised that any new policy introduced in future budgets would be funded “in the same responsible way that we have approached fiscal policy for our entire period in office”.

On the economy, Mr Hawke said that inflation was expected to fall to seven per cent by the end of 1987 and to about six per cent by mid-1988.

Mr Hawke asked for a “renewed mandate for Medicare”, promised minor changes to pensioners’ fringe benefit entitlements and what they could earn without losing some of their pension, and committed Labor to the goal of having two-thirds of Australia’s school children staying on to year 12 by 1990.

Labor would continue its fight against tax rorts, and the Australia Card legislation, defeated twice in the Senate, would be brought back.

In Labor’s televised campaign launch last night, one of three non-Government people interviewed on the economy and its future was a former Liberal Party figure, Mr Peter Frankel, who resigned because of the Opposition’s announcement in its tax policy that it would scrap some programs designed to encourage exports.

He demanded to know how Labor would pay for programs which, including those announced yesterday, the Liberals estimate would cost a total of $1400 million.