Vladimir Putin has gleefully launched a warship armed with new Mach 9 nuclear-capable hypersonic Zircon cruise missiles on a mission to challenge the West.

The Russian despot took part in an online ceremony with Sergei Shoigu to deploy the Admiral Gorshkov for its mission across the Atlantic and Indian Oceans and Mediterranean Sea, armed with one of the world’s deadliest weapons.

The vessel immediately fired a test launch into the Barents Sea, hitting a target 620 miles away in the White Sea, the Kremlin claimed.

The nuclear-capable cutting-edge Zircon missiles, which travel at speeds of nearly 7,000mph, have ‘no equivalent in the world’, Putin has previously claimed, and their arrival comes at a much-needed time for Russia after multiple setbacks in Ukraine. 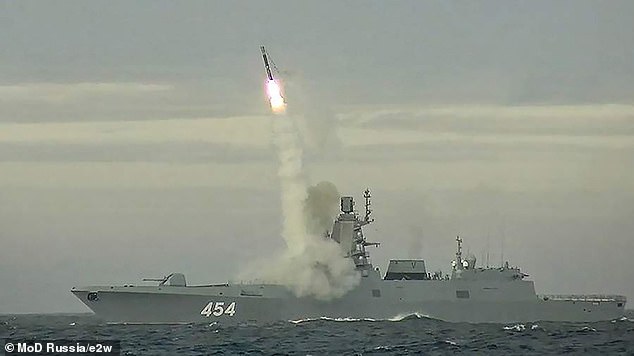 The tyrant could hardly contain his joy announcing the news today, saying: ‘I am sure that such powerful weapons will make it possible to reliably protect Russia from potential external threats and will help ensure the national interests of our country.’

The president proudly said today it was an ‘important, if not momentous, event’ as the vessel set sail in a task force from Severomorsk.

He added: ‘I am very glad. My congratulations. This is a very big, collective piece of work which ended up with a good result as expected. Begin your task.’

More than 10 months into the fighting, Russia has faced a series of humiliating setbacks on the ground in Ukraine.

The Russian military’s high command has come in for particular criticism in recent days following a strike by Ukrainian forces over New Year in which Moscow said 89 of its soldiers died.

Shoigu said today: ‘The main focus of the mission will be countering threats to Russia and supporting regional peace and stability together with friendly countries. 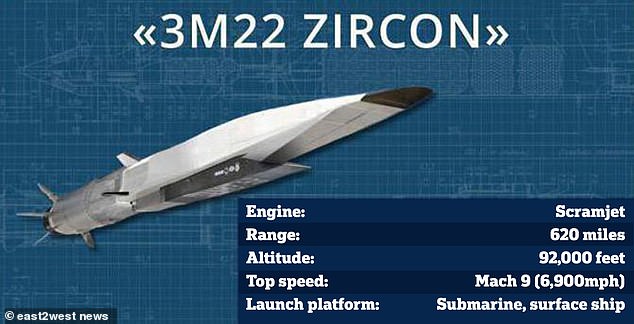 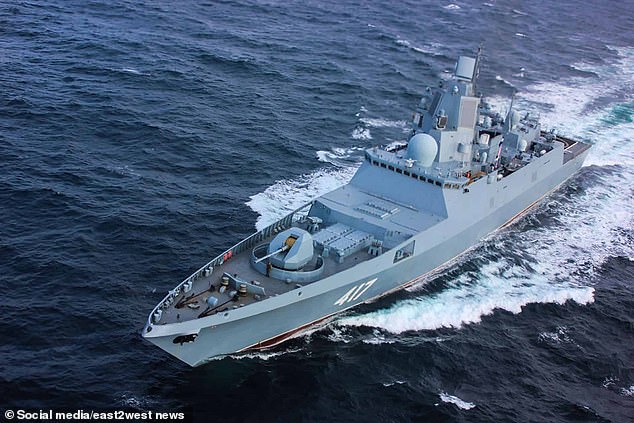 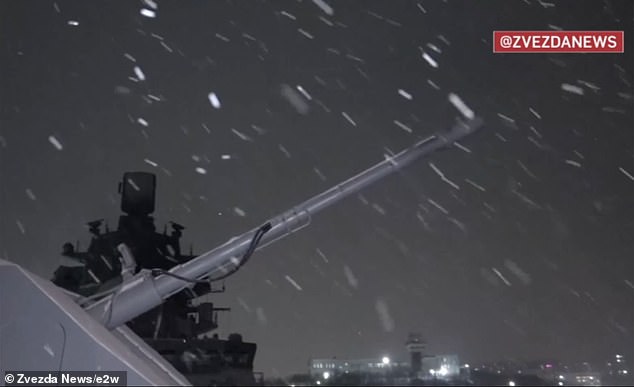 The nuclear-capable cutting-edge Zircon missiles, which travel at speeds of nearly 7,000mph, have ‘no equivalent in the world’, Putin has previously claimed

‘In exercises, there will be training for the crew on deploying hypersonic weapons and long-range cruise missiles,’ he said.

Shoigu said the Zircon missiles were ‘able to overcome any modern or future air defence’ and could deliver ‘pinpoint and powerful strikes against the enemy at sea and on land’.

Earlier TASS state news agency had stated: ‘It will perform its combat tasks in the Mediterranean Sea, with Tsirkon hypersonic missiles on board.’

The frigate had been undergoing scheduled maintenance at Kronstadt Marine Plant.

The new mission is expected to take the Gorshkov past the coast of the British Isles as it heads on a mission during the bloody conflict between Russia and Ukraine.

However, the Russians have not disclosed the exact routing or timings. 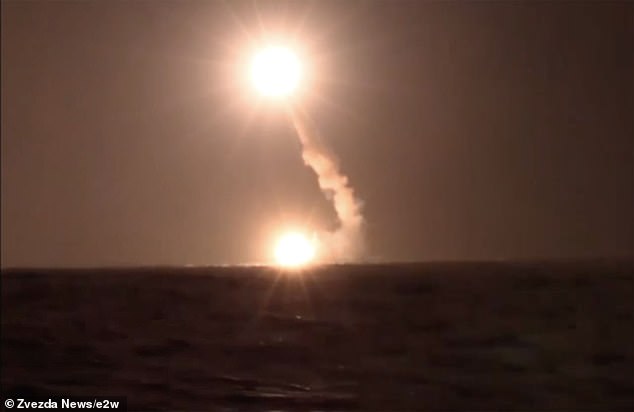 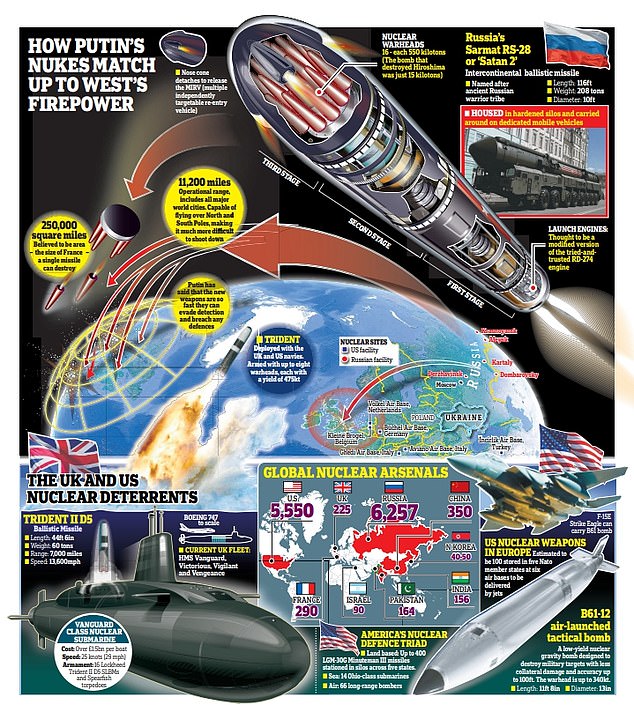 Moscow has boasted that the Gorshkov is ‘the most dangerous enemy of surface ships in the world’s oceans’ now it is armed with the new hypersonic missile.

It is also carrying state-of-the-art Kalibr missiles – used against Ukraine – in its armoury.

Russian media reports have said Zircon tests would be carried out during the voyage without saying at what stage.

The deployment of the sea-fired 6,670 mph missile with a range of some 625 miles follows tests in the Barents Sea.

‘Of course this carries a certain responsibility.’

Putin has taken a close interest in the development of the Zircon, a year ago announcing a ‘flawless’ salvo launch involving the new-era missile.

Earlier it was identified by Moscow’s state-controlled TV as Putin’s weapon of choice to wipe out American cities in the event of an atomic conflict. 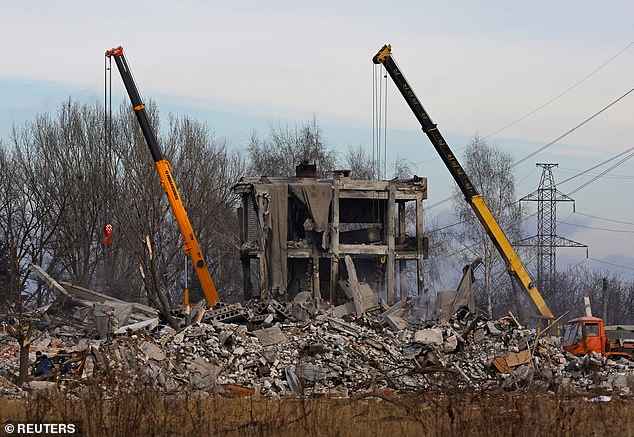 Workers remove debris of a destroyed building purported to be a vocational college used as temporary accommodation for Russian soldiers, dozens of whom were killed in a Ukrainian missile strike 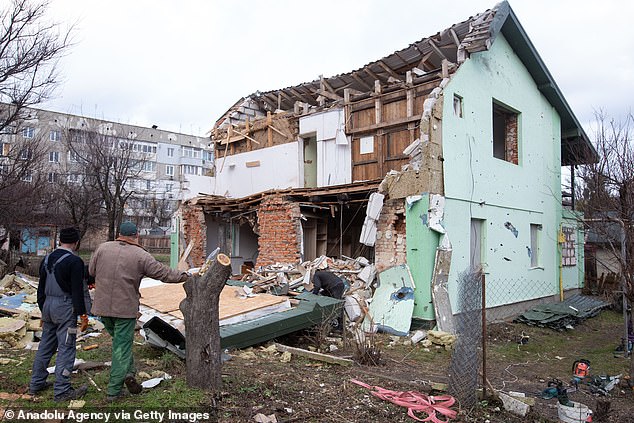 Putin has hailed ‘our newest [Zircon] missiles fired from the sea at sea targets, and land targets.

‘The tests were carried out successfully, flawlessly.

‘This is a big event for our country, a significant step in improving Russia’s security, in increasing (our) defence capability.’

He said it was in ‘serial production’, calling the weapon ‘truly unparalleled … in the world’.

TV Zvezda – a channel owned by the Russian defence ministry – said: ‘The speed of the Zircon hypersonic missile is so high that it prevents the opponent’s air defence system from detecting its impact in time.

‘In fact, its launch will be known only after the target has been hit.’

The missile has a ‘variable trajectory’ to avoid detection, viewers were told.

The frigate’s captain Igor Krokhmal has said previously: ‘No one will see the missile launch or its flight.

‘They will only see when the missile hits the target.

‘A surface target, a coastal target. I don’t think there will be anything to counter this in the next few years.’

He told Putin today: ‘The frigate’s crew is ready for military service.

The president said: ‘I am very glad, congratulations.

‘This was big, big work that finished with the good result we expected.