Legislation to bring about the biggest shake-up of housebuilding rules for more than 70 years was due to be published next week.

But Mr Gove yesterday shelved the proposals and pledged to conduct a review into how they can be improved.

The minister will consult with Tory MPs who had threatened to block the plans over fears it will lead to the concreting of swathes of southern England.

Mr Gove has been tasked by Boris Johnson to deliver on the Tory manifesto promise to start building 300,000 new homes each year. 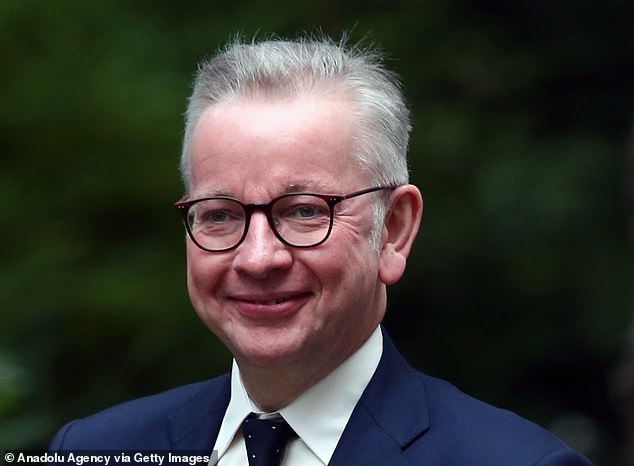 Legislation to bring about the biggest shake-up of housebuilding rules for more than 70 years was due to be published next week. But Mr Gove yesterday shelved the proposals

The Prime Minister is understood to believe that getting the younger generation on to the property ladder is critical to winning the next election.

As well as being in charge of housing, Mr Gove will lead on delivering Mr Johnson’s ‘levelling up’ agenda – which aims to tackle inequality across the country – as well as efforts on saving the Union.

Officials are considering a new name for the department, which currently has the clunky title of Ministry of Housing, Communities and Local Government.

‘Levelling up’ and ‘the Union’ could be included in its rebrand.

Backbench Tories have raised concerns about the planning bill, which was blamed for the party’s shock loss in the Chesham and Amersham by-election in June.

The shake-up aimed to stop local opponents blocking development in designated ‘growth zones’ in a bid to make it easier to hit house building targets.

But critics said the plans would side-line locals and warned of a ‘free for all for development’.

After the legislation was announced in the Queen’s Speech earlier this year, Tory MP Crispin Blunt raised concerns about the ‘issue of the noise around the developer connection with the Conservative Party’.

‘The delivery of a developer-led system of house provision will haunt us in future if we do not address it,’ he told a Commons debate.

Fellow Tory Bob Seely warned the ‘plan threatens to give our opponents throughout England a rallying cry of ‘Save local democracy from the Tories’ ‘.

Under the plans, every area in England would have been designated for ‘growth’, ‘renewal’ or ‘protection’.

Local councils would have decided how to designate all the land in their area.

All planning applications would have been registered online via an interactive map to help locals participate in the decision-making process.

But there were concerns that those living in growth areas could have been confronted with huge new developments they would get little say over.