A Yarra City councillor has been accused of starting an altercation with another woman outside a gay club in South Yarra, before the councillor allegedly exclaimed “Allahu Akbar” and vowed to “make sure all these faggots die”.

Anab Mohamud, a member of the Australian Greens, allegedly launched the homophobic tirade after sustaining serious facial injuries from the assault on April 11, according to a witness statement. 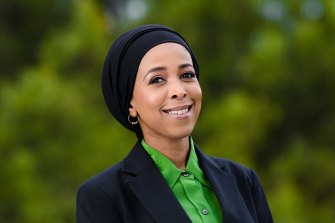 The statement was recently provided to Victoria Police detectives, who continue to investigate the incident outside Chasers nightclub, which hosts the popular LGBTQ dance party Poof Doof.

The security guard said he called an ambulance and attempted to administer first aid to Cr Mohamud immediately after the assault on Bray Street.

“[Cr Mohamud] told me numerous times to ‘bring that bitch back, I’ll f— her up’. She has also yelled out various things, such as ‘f— the LG family’ and also said something in what I believe was in Arabic and not understandable, followed by words along the line of, ‘I swear to Allah if I lose my eye I will make sure all these faggots die,’ ” the guard alleges in a statement to police.

Video footage obtained by The Age shows Cr Mohamud and a male companion walking down Bray Street about 3.40am, when she stops outside a caged smoking area to the rear of Chasers nightclub.

Another witness, who works as a manager at Poof Doof, told police Cr Mohamud reached through the bars of the smoking area and grabbed a “trans woman” by the hair.

The manager, who asked not to be identified, said he attempted to separate the pair.

“As I got to [the patron], I looked out the metal bars and saw that her head was being pulled against the metal gate bars by a female [Cr Mohamud] out on Bray Street … She was screaming, ‘F— you, I’m going to get you,’ ” the manager said in a sworn statement made on May 17.

Once separated, the patron opened an emergency door and pursued Cr Mohamud along Bray Street before the altercation occurred.

The manager alleges in his statement that Cr Mohamud was yelling “Allahu Akbar” – the Muslim declaration that God is great – after the incident.

He also alleges that her male associate said to him: “Do you know who the f— she is, you’ve messed with the wrong woman. She knows all the gangs, they will f— you up.”

Cr Mohamud did not respond to several requests for comment.

A Yarra City Council spokeswoman declined to comment on the fresh allegations involving the case.

“As this matter is part of an ongoing police investigation we are not in a position to comment further at this stage,” the spokeswoman said.

Last week, the council released a statement confirming Cr Mohamud had taken a leave of absence from council duties while she recovered from serious facial and eye injuries.

Cr Mohamud, who came to Australia as a Somali refugee 20 years ago and now lives in the Atherton Gardens Estate, says she has a “strong connection to Greens values”, according to her profile on the Australian Greens website.

“I want to send a strong message to young women from African backgrounds that this is our home too, that we have every right to become whatever we dream to be,” she says on the website.

“We can respect each other’s choices and beliefs without feeling that we have to change who we are to be accepted.”

Our Morning Edition newsletter is a curated guide to the most important and interesting stories, analysis and insights. Get it delivered to your inbox.