As nearly 400 year 9 students from high schools across Melbourne gather in the Reach Foundation’s darkened Melbourne auditorium, several teens take to the stage.

The volunteers are invited to do anything they want. One girl sings Halo by Beyonce. Another does a gymnastics routine. But a few others – and this happens every session – want to get up and apologise. 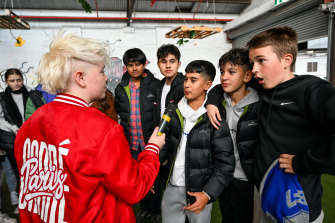 One girl says sorry for being a bitch to a classmate, who it turns out is sitting about five rows away. After some direct feedback, the apology is accepted.

Another boy puts a chair on stage, sits on it, takes out his phone and calls his mum. He wants to apologise for his dumb behaviour. He hasn’t been the nicest person, he says.

The audience of students, teachers, Reach staff and corporate guests can clearly hear his mother’s reply. Teenagers make mistakes, she says, the voice of reason. Just try and stay on the straight and narrow.

His audience of peers are surprised, and impressed, and later make a point of saying so.

“Unlike year 9s of other years, the year 9s of 2022 have not had a normal experience at high school,” says Margie Bainbridge, a leading teacher at Buckley Park College in Essendon. “They have had to rely on their own courage at home to get work done.”

Lockdowns meant many of them had no idea how to behave in the classroom, says Buckley Park Student Voice co-ordinator Anran Jia.

“We teach them when they leave to push their chair back, when you are doing online learning it is not going to happen.”

Last week The Sunday Age was granted exclusive access to one of the sessions, which aims to get young people to understand themselves a bit better and those around them. If that works, the mental health benefits will be immense.

The day starts just after 10am on the top floor of Reach’s large warehouse-style building on Wellington Street, Collingwood, where chaos reigns. It’s a whirl of puffers, hoodies, jeans, caps and MND beanies. Despite the cold, Melbourne being Melbourne, there is at least one kid in shorts. 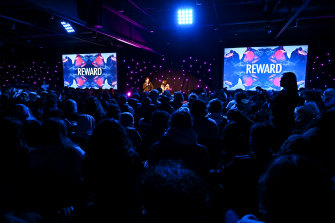 Some think they are here for lectures on bullying, but now they are letting loose. The popular girls pose for selfies with a ring light, the tough guys compete to make the highest chalk mark on a brick wall, others take themselves out of circulation and flop on beanbags in the corner.

Dispersed through the crowd are the Reach facilitators, observing, assessing. The Reach support crew have messy hair and cool clothes. They don’t look like teachers but like older siblings who are on your side, but will still call out your shit. The oldest is 26, the youngest just 15; his parents have given him permission for the day off school.

Inside the auditoriums, giant screens list the statistics. One in five of their peers lives with a single parent. Twenty-three per cent have been bullied in the past year, 39 per cent drink alcohol to risky levels, 51 per cent are unhappy with the way they look. And then the biggie: more than 350 young people aged 18 to 24 take their own lives every year. There is silence.

During the day, encouraged by the facilitators, more young people stand up from the audience, take the microphone, say their name and find their voice: I want to play Lego with my friend but he smokes too much weed; I’m a people pleaser; I think about binding my breasts; I want to talk about racism; I have anxiety; I hang out with people I don’t like when I want to play sport; my family tell me not to be weak; I want to be a doctor, specialising in pathology. 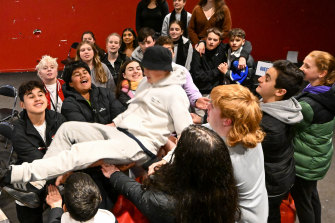 A boy, one of the self-confessed smart-arses, agrees to a challenge and scales a ladder. Does he trust his peers enough to fall back into their arms? The audience is thrilled, but it is his thoughts and feelings on stage afterwards which compel, when he talks about his inspirational mother, his belief in hard work and his desire to grow up helping people.

The day always starts with one kid selected to answer the simple question. “Who are you?”

The exact same question, asked every Heroes Day, always confounds. Stynes asked it 22 years ago and the kid who couldn’t answer it then was Fergus Watts, who grew up to be an AFL player and co-founder of communications and marketing firm Bastion, with his brother Jack. 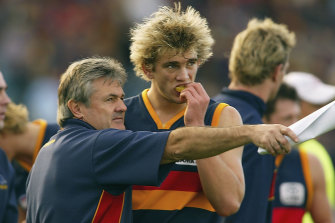 Fergus Watts, in 2004, when he played for the Adelaide Crows.Credit:Getty Images

This year, Watts moved from the Reach board to take over as chief executive, after a period of executive turnover.

“Jim pulled me up on my chair and said ‘who are you’?” Watts recalls. “That core question – who are you – is the question. If you know who you are, then you are more likely to go through life in a strong self-assured mental health position, than if you don’t.”

Heroes Day is about The Hero’s Journey. Not just Luke Skywalker in Star Wars, but the teenagers in the audience, who mimic the journey every day from their Familiar World at home to the Special World – everything that life throws at them.

Growing up is different now, warns Sophia Viola, a 14-year-old school captain of Brookside College, a prep to year 9 state school in Caroline Springs. “The majority of the time there is pressure. People feel they are going to get judged.”

Buckley Park student April Kokkoris, 14, says at Heroes Day “kids were able to finally get a say for once. People were actually listening for once.”

“It shocked me how much you don’t really see what is happening behind the scenes with kids and how much their home life does affect the way they are as people,” Kokkoris said.

“Although we haven’t lived much compared to adults, we have still had quite a lot to go through, and it affects us a lot. There’s a lot more to us that meets the eye.”

By the time Telaine attended a Reach camp, she had been suspended 48 times and become a juvenile offender. She ran away from it. Stynes ensured she would attend the next camp, by arranging for it to be on an island. There was no escape. Stynes, she says, liked naughty kids.

“He just liked the grit and the determination and the resilience that young people had, that maybe were naughtier than others. Because their life experience had given them opportunities to find that resilience and courage and bravery.”

Stynes died in 2012 of cancer, aged 45. Telaine stayed with Reach and is now part of the leadership team, working as national training manager. She says of Stynes: “He knew that with the right people around them, they would create beautiful lives for themselves, so he would step in and become that person.”

And what of the Heroes themselves? By mid-afternoon they had faced tests, enemies and allies, before slaying their dragons and reap the reward. It’s not a pot of gold, or even KFC, say the facilitators, but knowledge about themselves.

They trooped out of the foundation, a little bit wiser, down onto Wellington Street and out into the wide, wide world.