Home » World News » HIMYF Star Hilary Duff on 'Smoochin' It Up' with John Corbett After He Once Played Her Teacher: 'We're Cool' 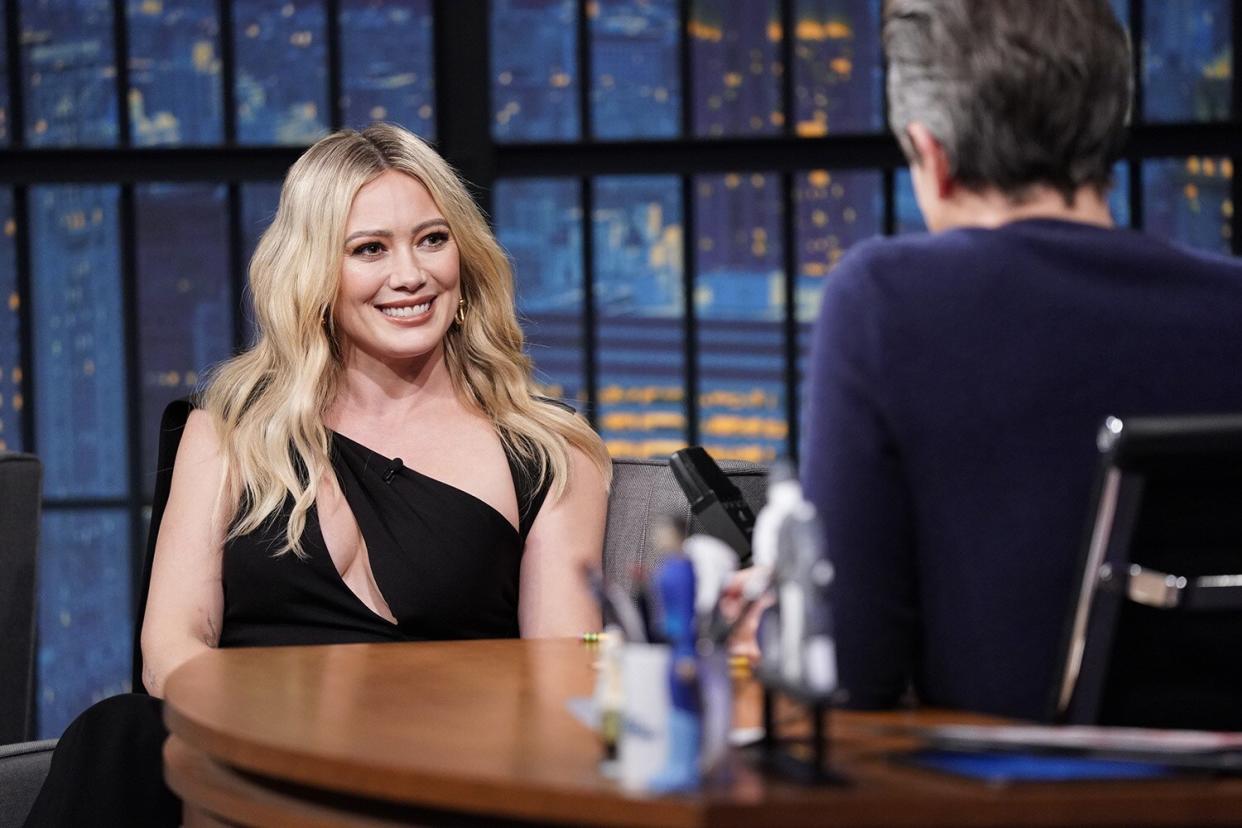 It’s a TV mashup no one predicted: Lizzie McGuire and Aiden Shaw!

While visiting Late Night with Seth Meyers on Monday night to promote the second season of her Hulu show, How I Met Your Father, Hilary Duff talked about her character’s relationship with an older man, played by Sex and the City star John Corbett.

Right away, Meyers, 49, reminded the actress that Corbett played her high school music teacher in the 2004 film Raise Your Voice.

“He sure did, and now we are smooching it up,” Duff said with a laugh.

“This would have been very bad if it had happened then,” Meyers said, holding up two photos: one fromHIMYF of Duff, 35, and Corbett, 61, kissing and another of them sitting side-by-side from Raise Your Voice.

Never miss a story — sign up for PEOPLE’s free daily newsletter to stay up-to-date on the best of what PEOPLE has to offer, from juicy celebrity news to compelling human interest stories.

The late-night talk show host then asked Duff if she was a fan of her costar’s hit show, Sex and the City.

Duff went on to admit that it’s difficult to see Corbett as anyone but furniture designer Aidan Shaw from Sex and the City. “In my mind he’s Aidan,” she told Meyers. “I did call him John on set. But I have to — not suffer through — but, you know, a lot of my life I’m called Lizzie [McGuire], so, it’s just, that’s what it is.”

Pretty soon Duff and fans alike will get to see Corbett reprise his breakout character.

Just over a week ago, the official And Just Like That… Instagram account shared several photos of Sarah Jessica Parker and Corbett holding hands as they walked down the street in New York City while filming the series. The post was captioned, “Shh. Don’t tell anyone.”

RELATED:Sarah Jessica Parker Confirms John Corbett’s Aidan Is Returning for And Just Like That… Season 2

The photos come less than four months after Parker confirmed that Corbett, 61, would reprise his role as the hunky woodworker in season 2 of the HBO Max revival of Sex and the City.

“Could be, could be,” Parker told Entertainment Tonight in September when asked if Corbett would step into the role of Carrie Bradshaw’s ex once again. “Well, you know, I can’t be like, cryptic about it anymore.”

RELATED VIDEO:Sarah Jessica Parker on Set of ‘And Just Like That…’

Deadline reported at the time that Corbett will have a “substantial, multi-episode arc,” but there’s still no telling if Carrie and Aidan will get another shot at love (though the photos of the characters holding hands make it look like they do!)

The season 2 premiere of How I Met Your Father is streaming on Hulu now. New episodes drop on Tuesdays.