WASHINGTON (AP) — Lawmakers no longer have to walk through metal detectors before gaining access to the House floor. And any time they do vote, they will have to do so in person — no more voting by proxy from home.

Those are just some of the changes being made by the now GOP-led House that had chafed at some of the restrictions Democrats put in place as a result of the COVID-19 pandemic and the Jan. 6 insurrection.

A look at some of the key changes Republicans adopted Monday that will affect floor proceedings and dictate their priorities in the 118th Congress.

As the pandemic surged in the U.S. and the death toll reached more than 80,000, the House approved new rules allowing lawmakers to vote by proxy. Under the process, they assigned their vote to another lawmaker who then announced on the House floor how the absent lawmaker was voting on a particular bill.

Republicans opposed the change from the start, though many used proxy voting after it went into effect. And hewing to their campaign promise, they made sure the House rules provide no option for remote voting.

“It’s about making Congress work again where people have to show up and do their jobs in person like everybody else in the real world has to,” Scalise said. 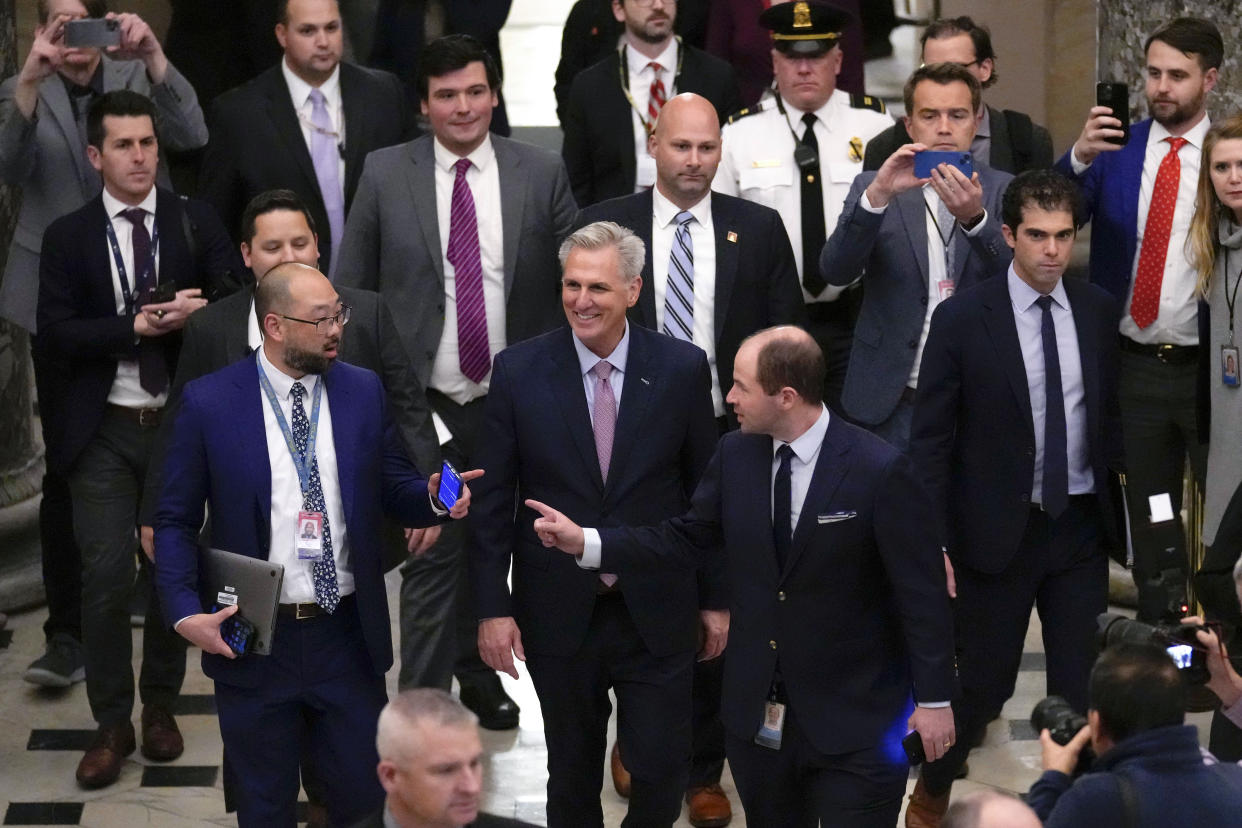 PRESSURE ON THE SPEAKER

House rules give lawmakers the ability to remove the speaker from the job through what's known as a motion to vacate. A majority vote of all House members would be needed for the speaker to be ousted.

House Speaker Kevin McCarthy, R-Calif., hoping to appease some on the hard right, agreed to give as few as five Republican members the ability to initiate a vote to remove him. But when that wasn't good enough for some of the more conservative members of the conference, he agreed to reduce that threshold to one — the threshold that historically has been the norm.

Proponents of the one-person threshold said it promotes accountability, noting its long history in the House. The last use of the motion was in 2015, when then-Rep. Mark Meadows of North Carolina, a Republican who later became Donald Trump's chief of staff, introduced a resolution to declare the speaker's office vacant. Two months later, Speaker John Boehner, R-Ohio, said he would be stepping down.

Rep. Jim McGovern, D-Mass., calls the move to go back to the lower threshold “allowing the far-right to hold the incoming speaker hostage." And some moderate Republicans agree with that assessment.

But Rep. Ralph Norman, R-S.C., who initially opposed McCarthy's speakership bid before ultimately supporting him, said the bare-minimum threshold had been in place since the 1800s and is an important tool that was in force until House Speaker Nancy Pelosi took the gavel.

“In the business arena, if a CEO is not doing the job, you get fired," Norman said. “Same thing in politics. We're not immune."

Republicans are proposing major changes to the Office of Congressional Ethics, which initiates reviews of ethics complaints and when appropriate refers its findings to the House Committee on Ethics. Only the latter has the authority to recommend discipline.

But the office initiating the review plays a critical role in ensuring complaints from the public are followed up on. The board has six members and two alternates.

The Republican rules package would essentially gut the office, according to advocacy groups opposing the changes being made.

Together, these changes weaken OCE to the point where the office would struggle to perform its core function, dismantling one of the only ways members of Congress are head accountable for ethics violations.Campaign Legal Center

First, the new rules force three of the four Democrats who currently sit on the eight-member board to leave their positions immediately because they would be serving beyond an eight-year term limit that the rules package imposes. Second, it requires OCE staff to have been hired within 30 days of the rule's passage, making it difficult to assess and hire candidates for those jobs in such a brief window.

“Together, these changes weaken OCE to the point where the office would struggle to perform its core function, dismantling one of the only ways members of Congress are head accountable for ethics violations," said the Campaign Legal Center, which led a letter to lawmakers on behalf of about two dozen advocacy groups.

Members of both parties have chafed at the OCE's work over the years, complaining that complaints to the office are often politically motivated. The rule also directs the Ethics Committee to come up with a process to receive complaints directly from the public, rather than go through the OCE.

Another rule Republicans are resurrecting allows lawmakers to include language in appropriations bills that can rearrange an agency or slash specific positions or salaries.

Republicans say the rule is about enhancing accountability. Rep. Morgan Griffith, R-Va., said the rule was created in 1876 as a tool to cut spending by restructuring an agency. Rep. William Holman thought spending was out of control, Griffith said.

But the rule could also be used to target an individual over ideological differences, or say a special counsel, like the one overseeing the Justice Department’s investigation into the presence of classified documents at former President Donald Trump’s Florida estate. Of course, the Democratic-led Senate would have to go along for any such rescissions to take effect, which is highly unlikely.

The House Freedom Caucus even specifically named Dr. Anthony Fauci in calling for the rule's reinstatement. Fauci served as director of the National Institute of Allergy and Infectious Diseases from 1984 to 2022, and his efforts to mitigate the damage from COVID-19 clashed with the views of some conservatives closely aligned with former President Donald Trump.

FIRE UP THE INVESTIGATIONS

The rules package calls for the House to vote on a resolution establishing a committee to investigate a number of things involving “strategic competition" between the U.S. and China as lawmakers take a more hardline approach with the Asian nation.

It also calls for creation of a “select subcommittee on the Weaponization of the Federal government" to be within the Judiciary Committee, which is headed by Rep. Jim Jordan, R-Ohio, a hardliner who is a close ally of Trump.

“We’re going to get into what’s going on at the FBI where we have had 14 whistleblowers come talk to us about the weaponization of government there and the political nature of the Justice Department," Jordan said on “Fox News Sunday.”

Votes on creating those committees could come as soon as this week.

Democrats call the “weaponization" panel a ploy to push a far-right agenda.

“In my mind, it speaks volumes that they are choosing to prioritize this kind of dangerous partisan garbage instead of actually trying to help the American people," McGovern said.