THE water turns red with blood as an explosive harpoon hits the whale, and she writhes around in pain.

Traumatised and still alive, her bloody body is bound and dragged back to shore by cruel hunters who will sell her meat to be either served to tourists as a 'delicacy' – or chopped up and used as pet food. 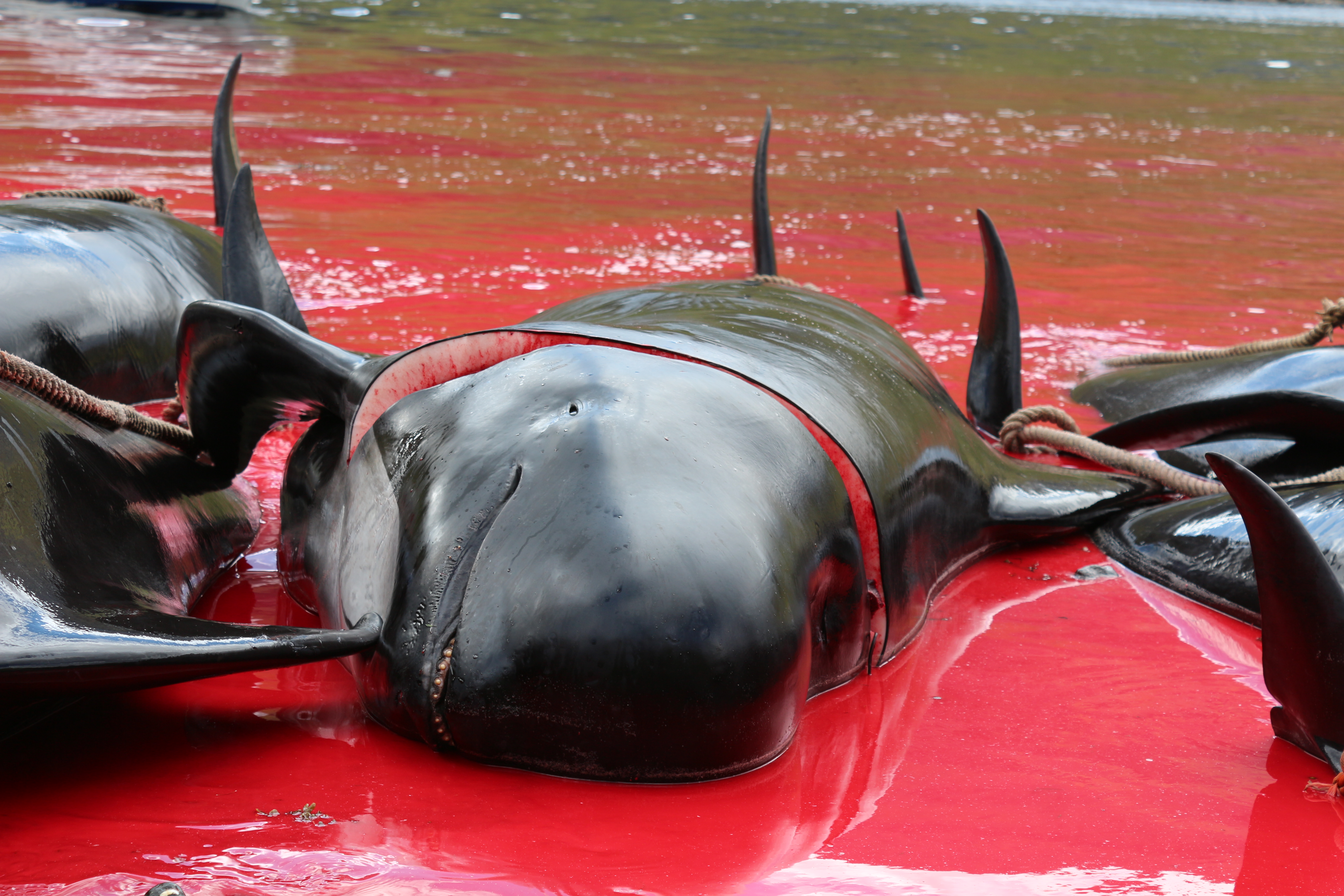 The barbaric and cruel whaling industry has been thrust into the limelight this weekend following the release of Netflix documentary, Seaspiracy, which delves into the brutal trade.

Harrowing scenes showed the majestic beasts being stabbed to death after being driven into the shore by boats.

While killing whales commercially was banned internationally in 1986, countries including Japan, Norway and Iceland continued, despite international protest over the barbaric ways they are killed.

Harpoon bombs that often take up to an hour to explode are fired into the helpless beasts – and blunt hooks are beaten into their blow holes.

This agonising death is a tragic end for the whales, and conservationists brand it a 'cruel' and 'pointless' tradition.

But sadly, before the pandemic halted much of global travel, there was still a soaring demand for whale meat among tourists in recent years.

Even Duchess of Cambridge Kate Middleton's sister Pippa has boasted about eating smoked whale carpaccio in Norway in the past, saying it tasted like "smoked salmon".

PETA spokeswoman Elisa Allen said at the time: "It beggars belief that anyone, let alone someone from a country like ours, where whale meat has long been banned, could be oblivious to the uproar over Norway's slaughter of these gentle giants.

"What's next, a panda steak or an elephant canapé?" 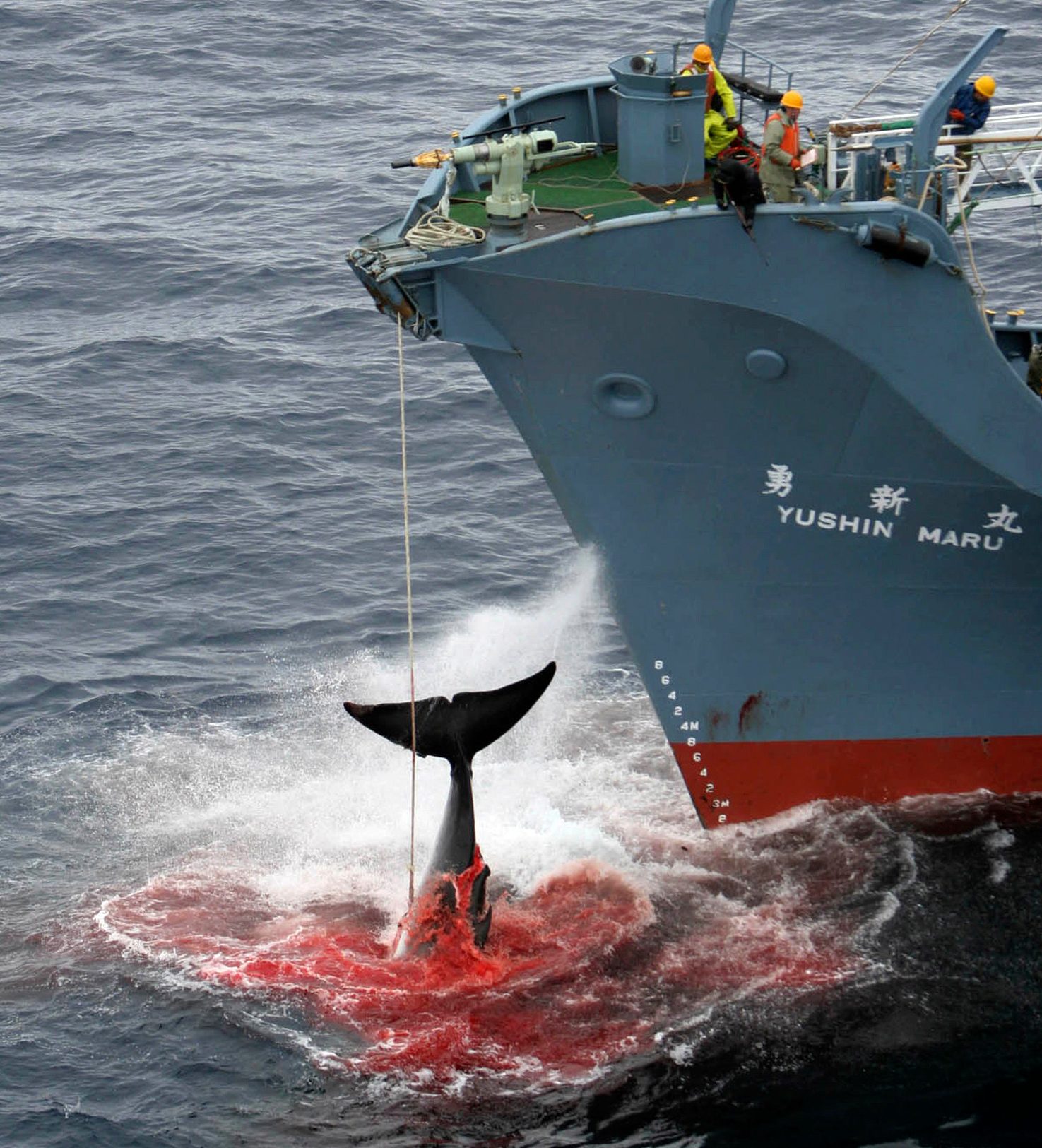 Despite previously agreeing to the ban, for years Japan still hunted whales under the guise of 'scientific research', before fully resuming in July 2019.

In 2018 they killed 333 minke whales – tragically including 122 that were pregnant – as part of their 'field survey'.

When the Japanese government reinstated commercial whaling, fishermen caught and killed their first whale within hours of a five-vessel hunting expedition.

A short while later, the first crew returned to shore with the butchered body of a giant minke whale on board.

The marine giant was hauled off the deck of the trawler by crane before it was dumped in a dockside warehouse to be measured before being taken away by lorry. 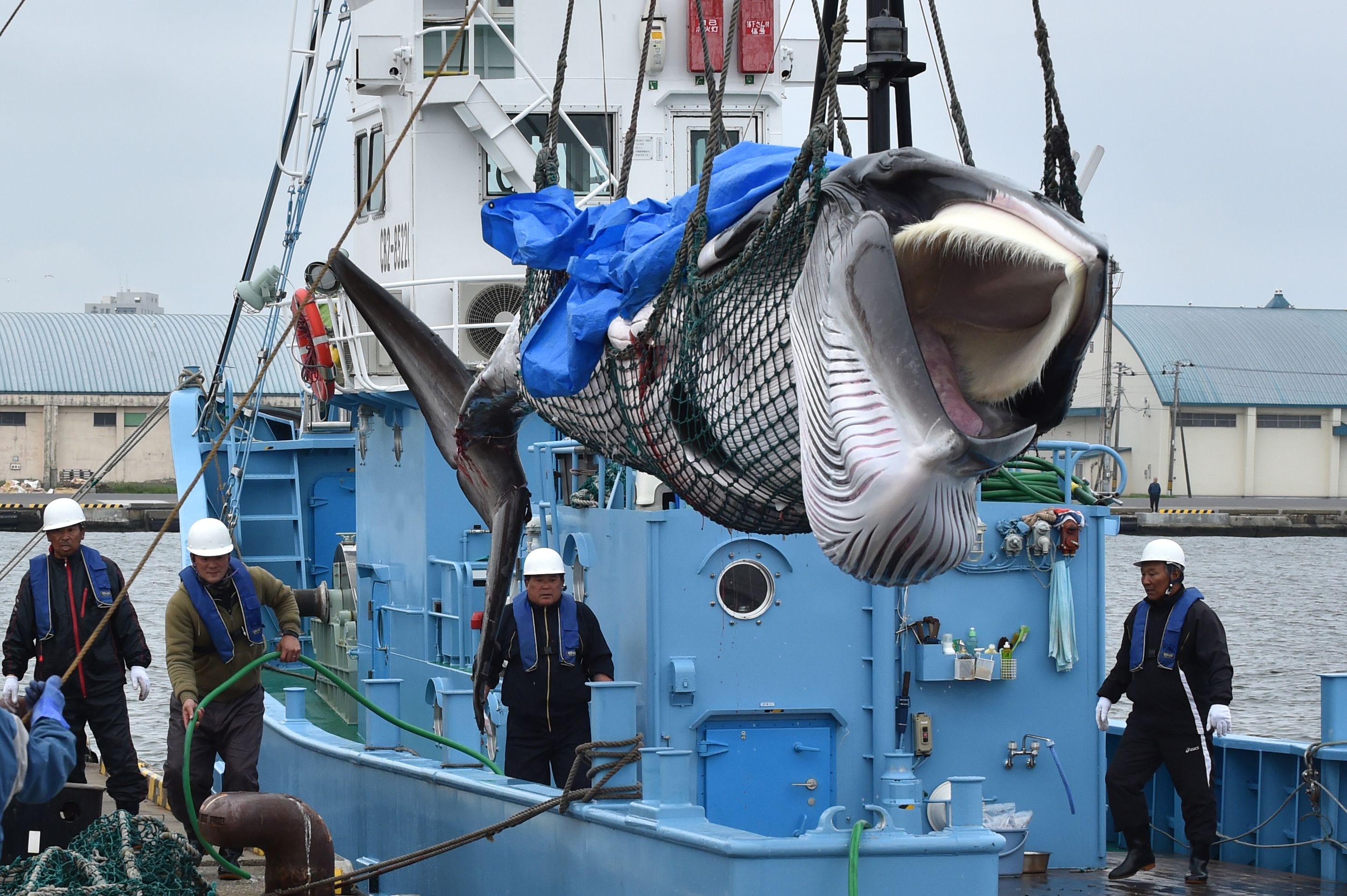 Meanwhile, Iceland and Norway are the only other countries in the world to authorise whaling – although Iceland haven't hunted any whales in recent years, citing Coronavirus and an increased interest in whale watching as reasons for their decision.

According to Whale and Dolphin Conservation (WDC), Iceland’s fin whalers slaughtered over 146 of the endangered mammals in 2018, including at least two rare blue whale/fin whale hybrids, and a dozen pregnant females.

Norway set itself an annual quota of 1,278 minke whales to kill in 2019, and every year in the Danish Faroe Islands around 800 pilot whales are massacred, with blunt hooks beaten into their blow holes while they are still alive. 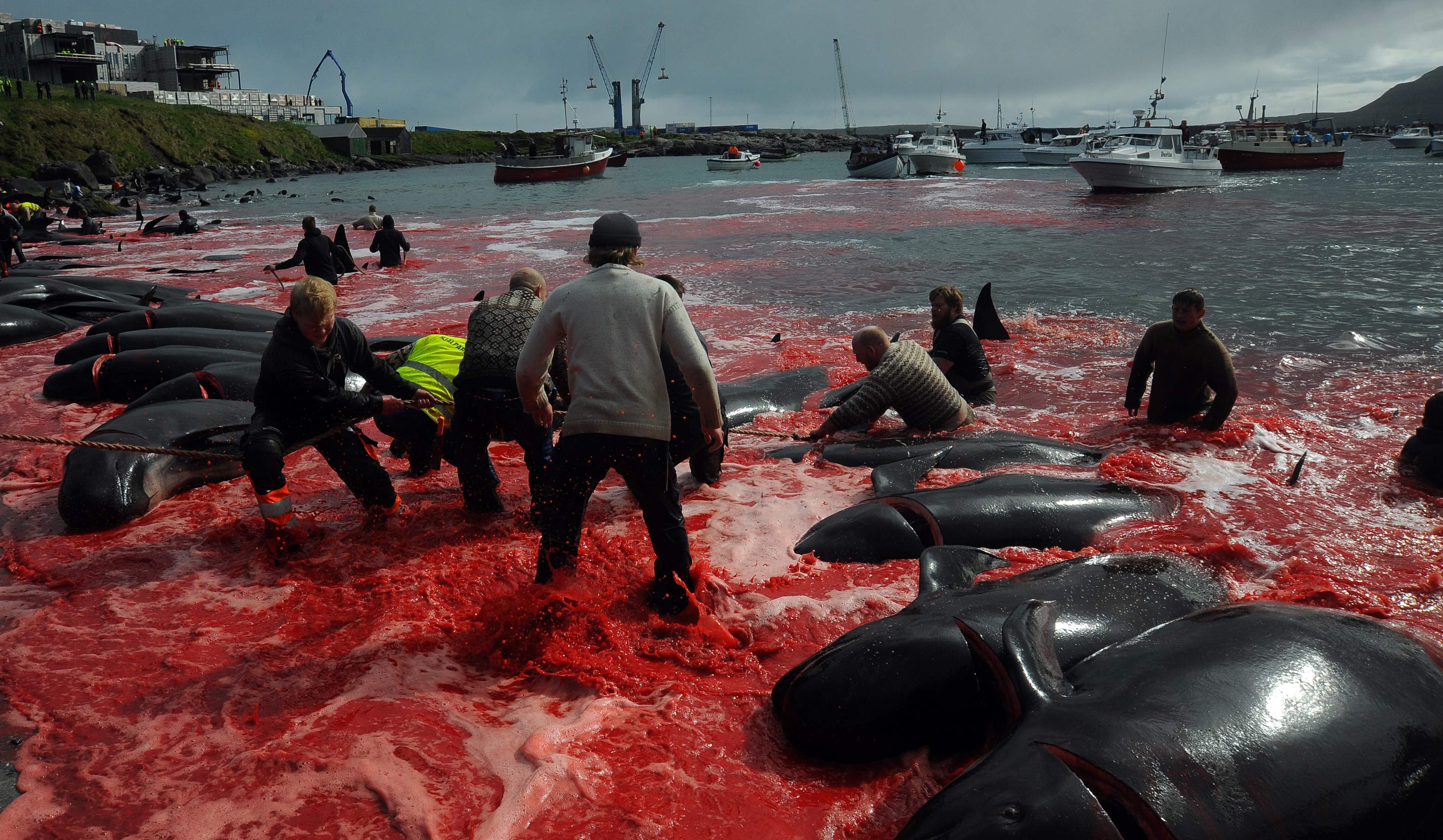 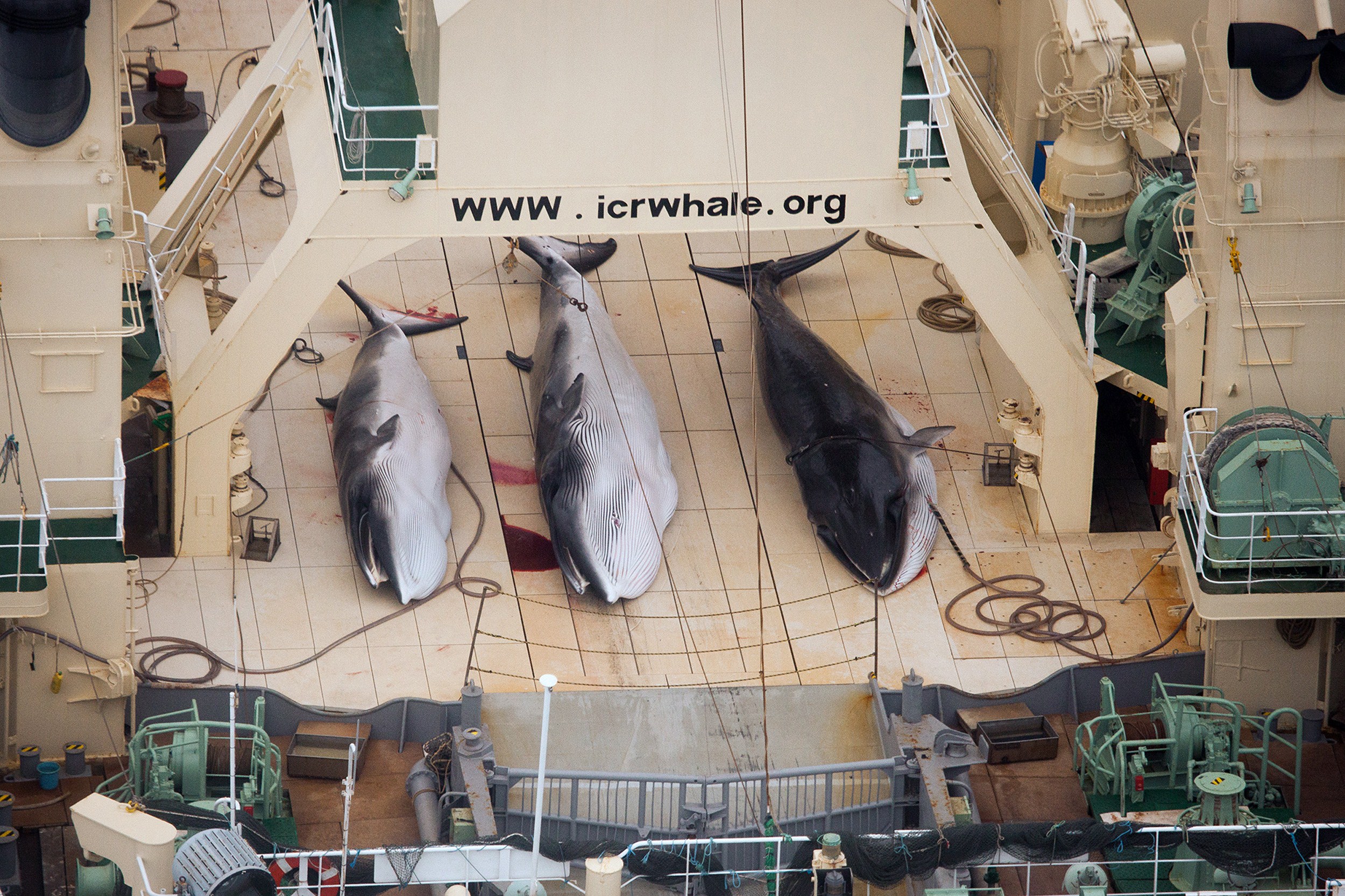 It's an inhumane death, with some whales suffering agonising pain for up to an hour after being shot with a hunting device called the 'Whalegrenade-99' which is manufactured in Norway and widely used.

A harpoon containing explosive penthrite is shot from a cannon on the deck of a whaling boat.

Once embedded approximately half a metre into the whale the device then detonates, with the aim to kill the whale upon impact. 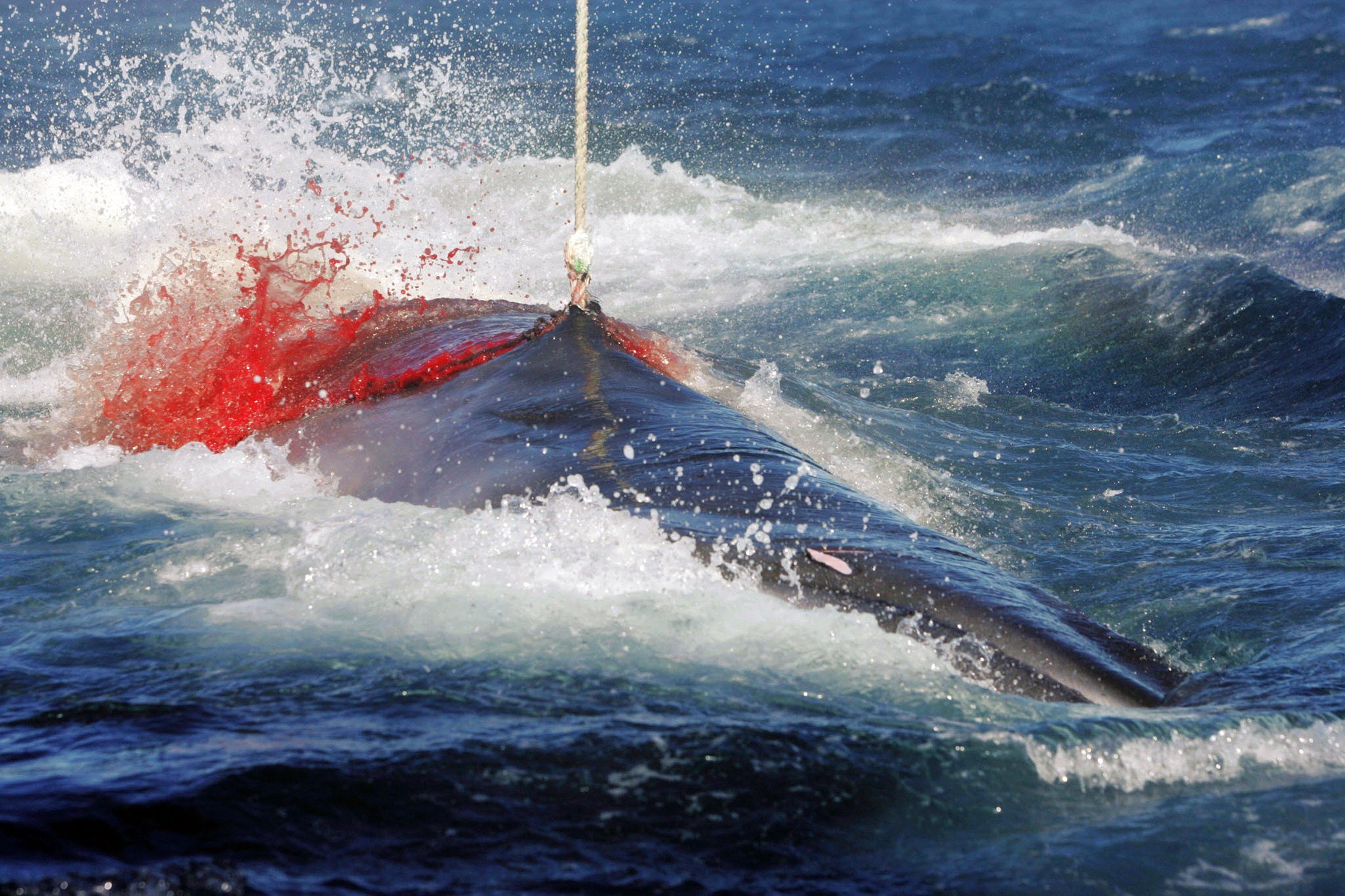 However, according to a report by Norwegian authorities, nearly 20 per cent of the whales shot by harpoons tipped with explosive penthrite grenades were found to suffer for between six and 25 minutes before they eventually died.

Speaking to The Sun Online, Danny Groves, Communications Manager at Whale and Dolphin Conservation, says: “Whales are subject to a terrifying ordeal when shot with a grenade tipped harpoon.

"The pursuits can last for long periods of time, causing exhaustion and severe stress to the whales and a second harpoon is often required to complete the job, further adding to their terror and suffering."

Whale meat sells for over £150 per kilogram in Japan – making it five times more expensive than lobster.

While in Iceland only three per cent of the population eat whale regularly, it's thought one in 10 tourists try it when visiting. 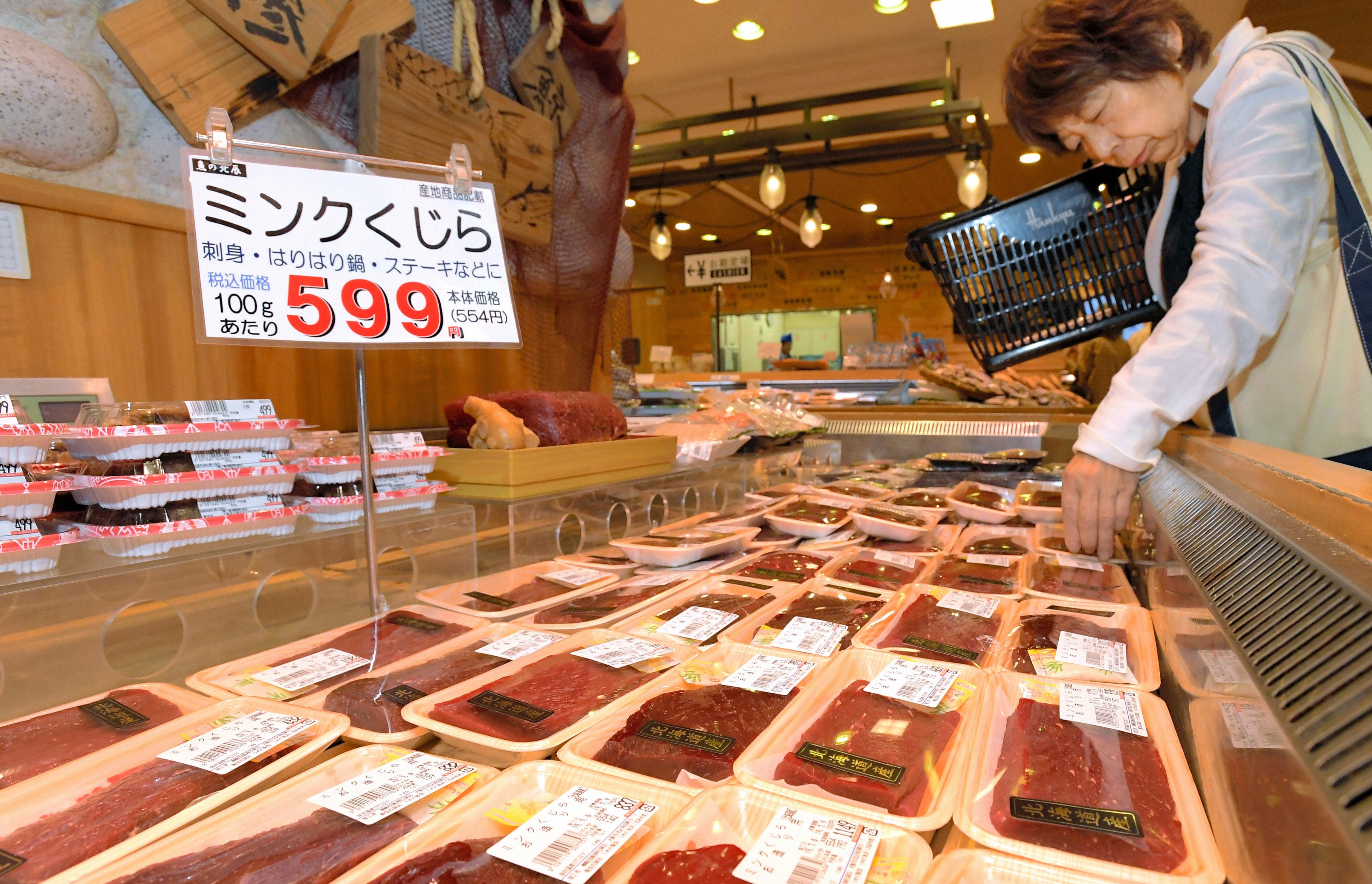 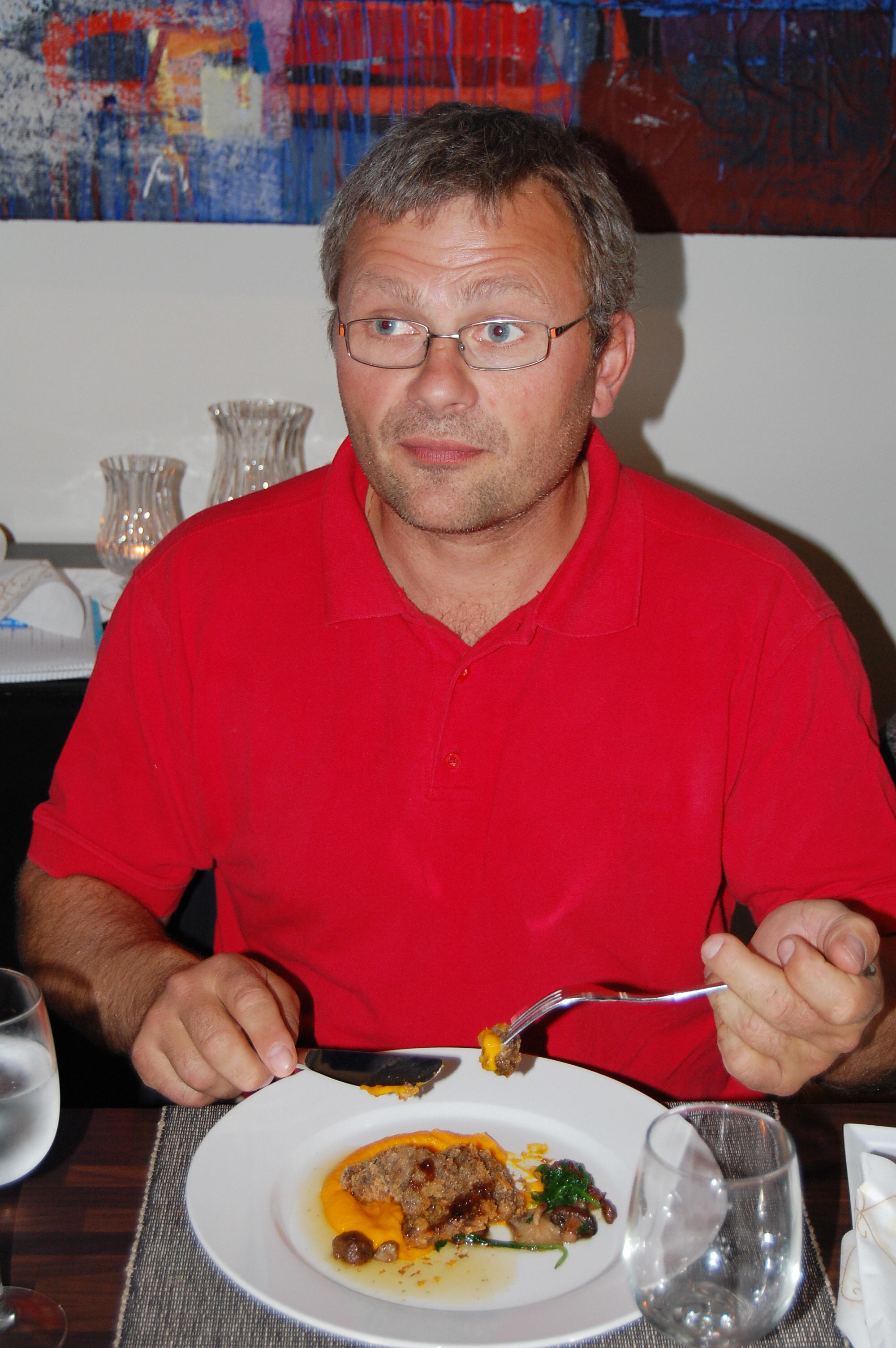 Danny says: "Japan, Iceland and Norway continue to hunt and kill fin and sei whales – both of which are listed as endangered – and minke whales every year despite the fact that there is little demand for the meat.

“Very few people in these countries actually eat the meat anymore. Much of the meat is frozen and served to tourists who are told it is a traditional dish and some has even been used for pet food.

"So, with little demand for the meat, the agonising deaths that these whales suffer is pointless." 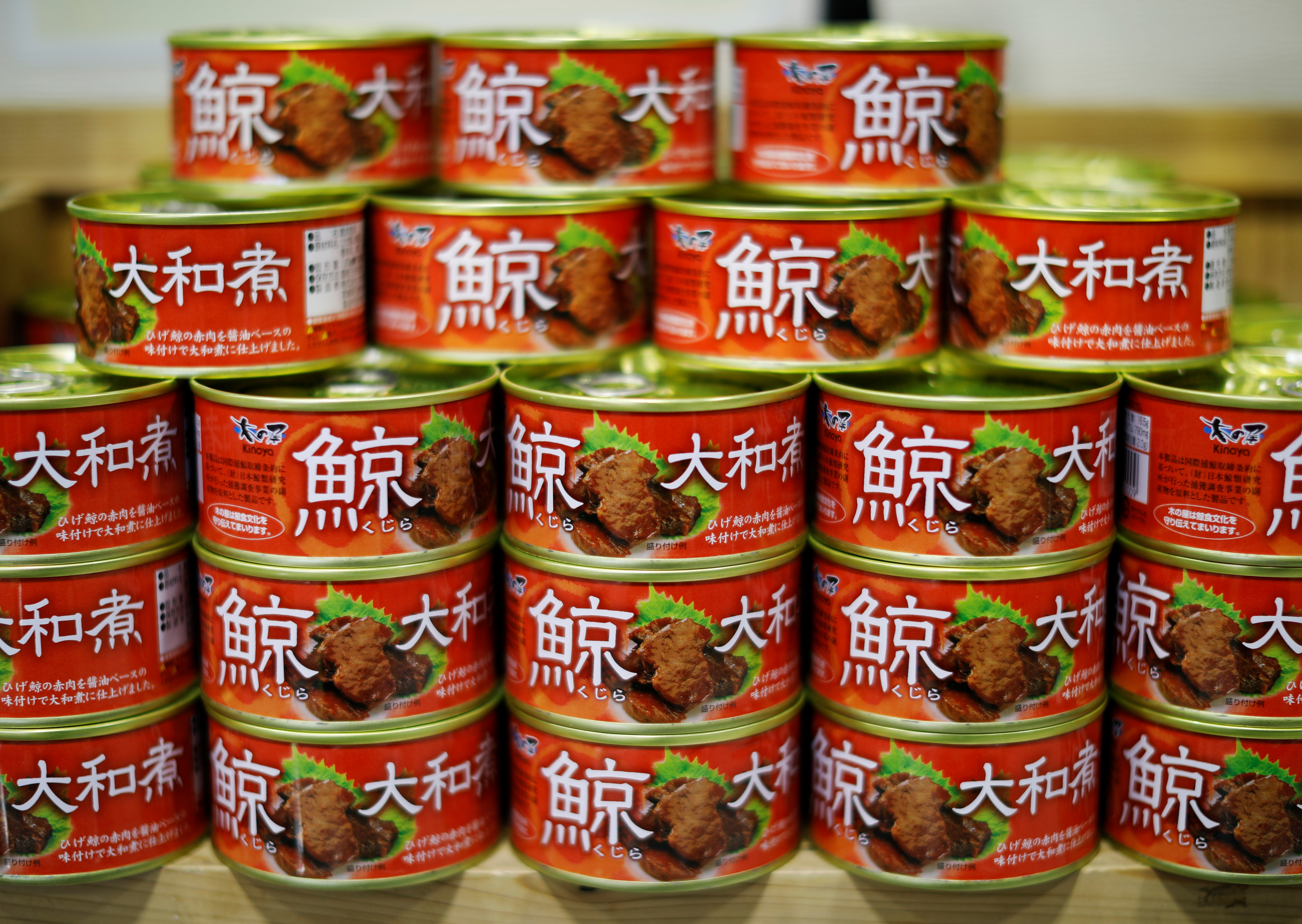 Domestic consumption of whale meat was around 200,000 tonnes a year in the 1960s, when it was an important source of protein in the post-war years.

However, whale meat consumption was down to just 6,000 tonnes in 1986- just a year before the commercial whaling moratorium imposed by the IWC.

Japan’s whalers still killed 333 minke whales during their final “research” expedition to the Antarctic, which ended in 2019.

In previous years, however, it slaughtered almost 1,000 whales a year, amid confrontations on the high seas with the conservation group Sea Shepherd.

Meat from the hunts was sold on the open market, prompting claims that they were a cover for commercial whaling.

Many Japanese people still clearly have a taste for tinned whale (see photo) despite what the rest of the world thinks.

"If we had more whale available, we'd eat it more," said Sachiko Sakai, a 66-year-old taxi driver in Kushiro, on the northernmost main island of Hokkaido.

"It's part of Japan's food culture," said Sakai, adding that she ate a lot of whale as a child.

"The world opposes killing whales, but you can say the same thing about many of the animals bred on land and killed for food." 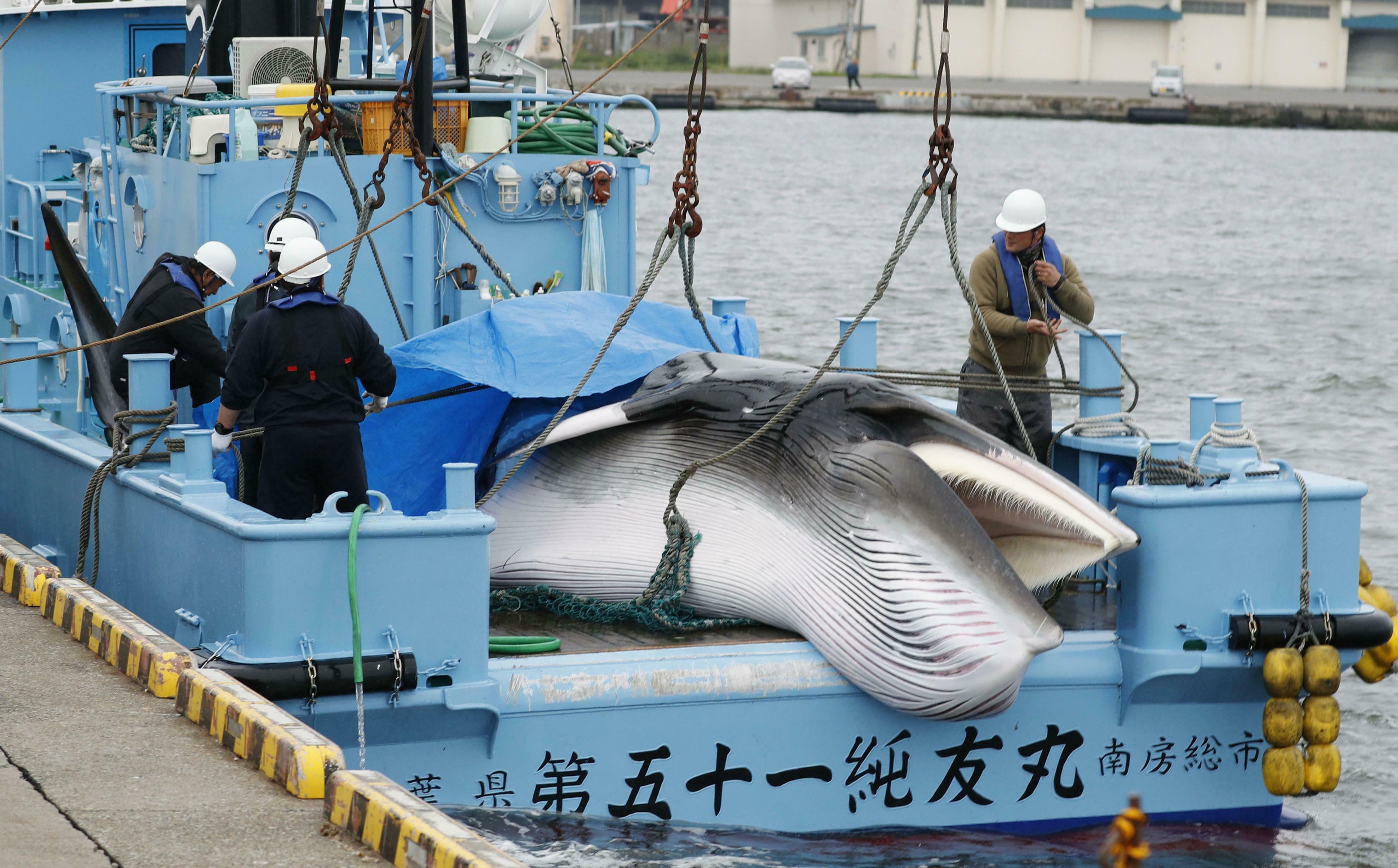 There have been plenty of other gimmicky ways companies have tried to profit from whale products.

One Icelandic brewery, Stedji, still offers 'whale beer', describing it on their website as "one of the most controversial beers in the world".

Brewed with Icelandic water, barley and berry hops, the main ingredient is a smoked whale testicle.

In 2013 an Icelandic whaler even proposed powering his whaling vessels with biofuel made from 20 per cent whale oil and 80 per cent diesel. 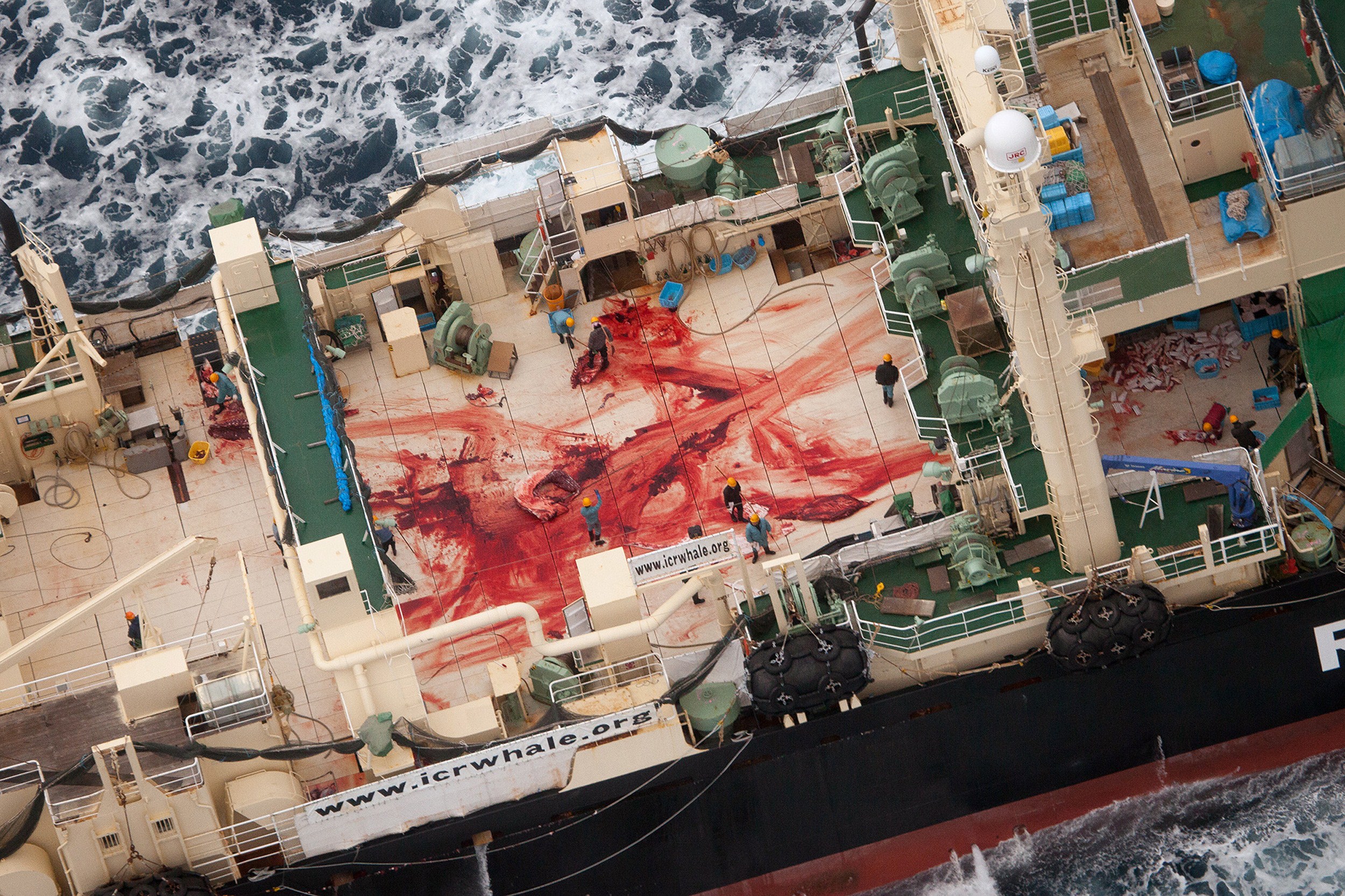 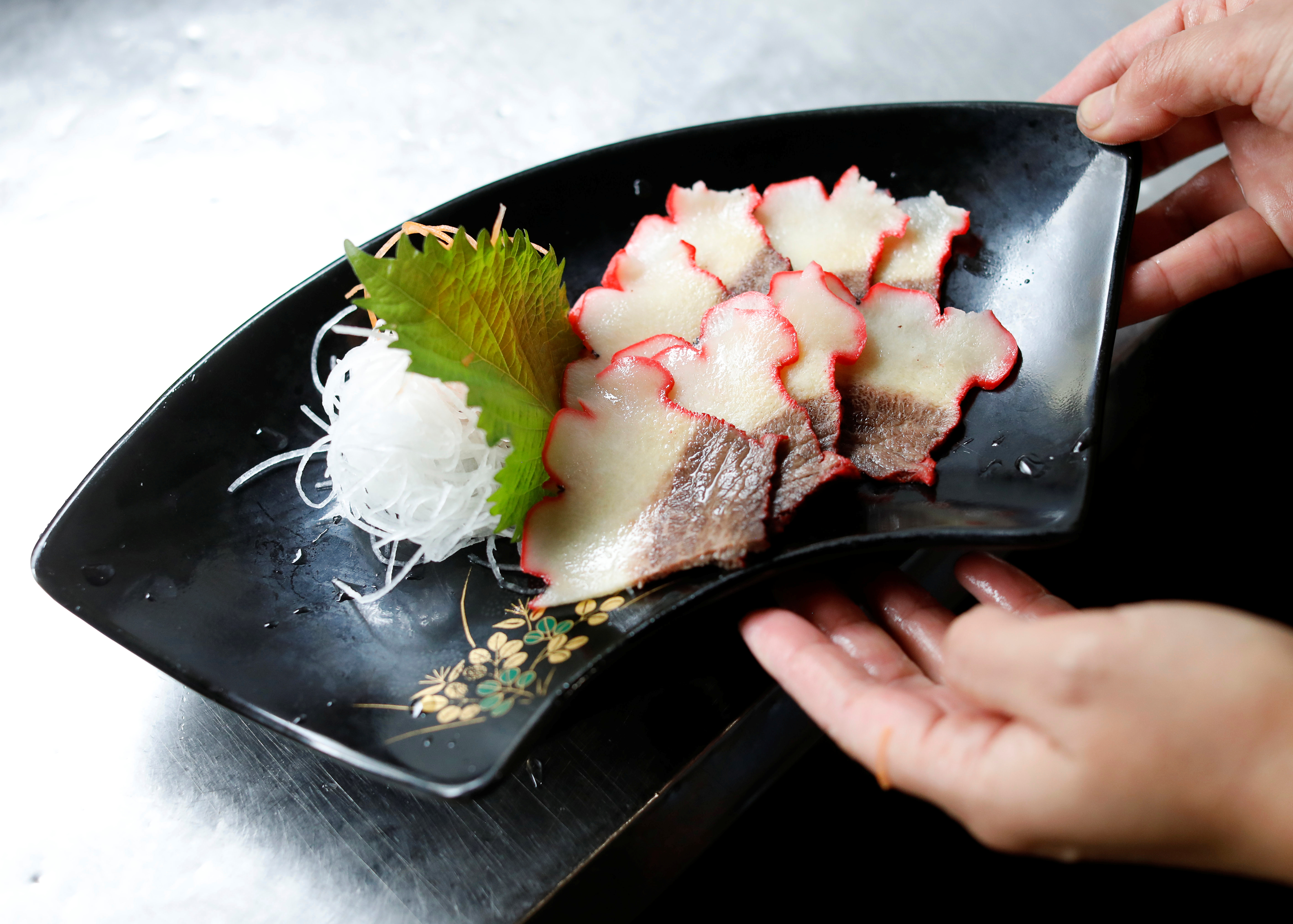 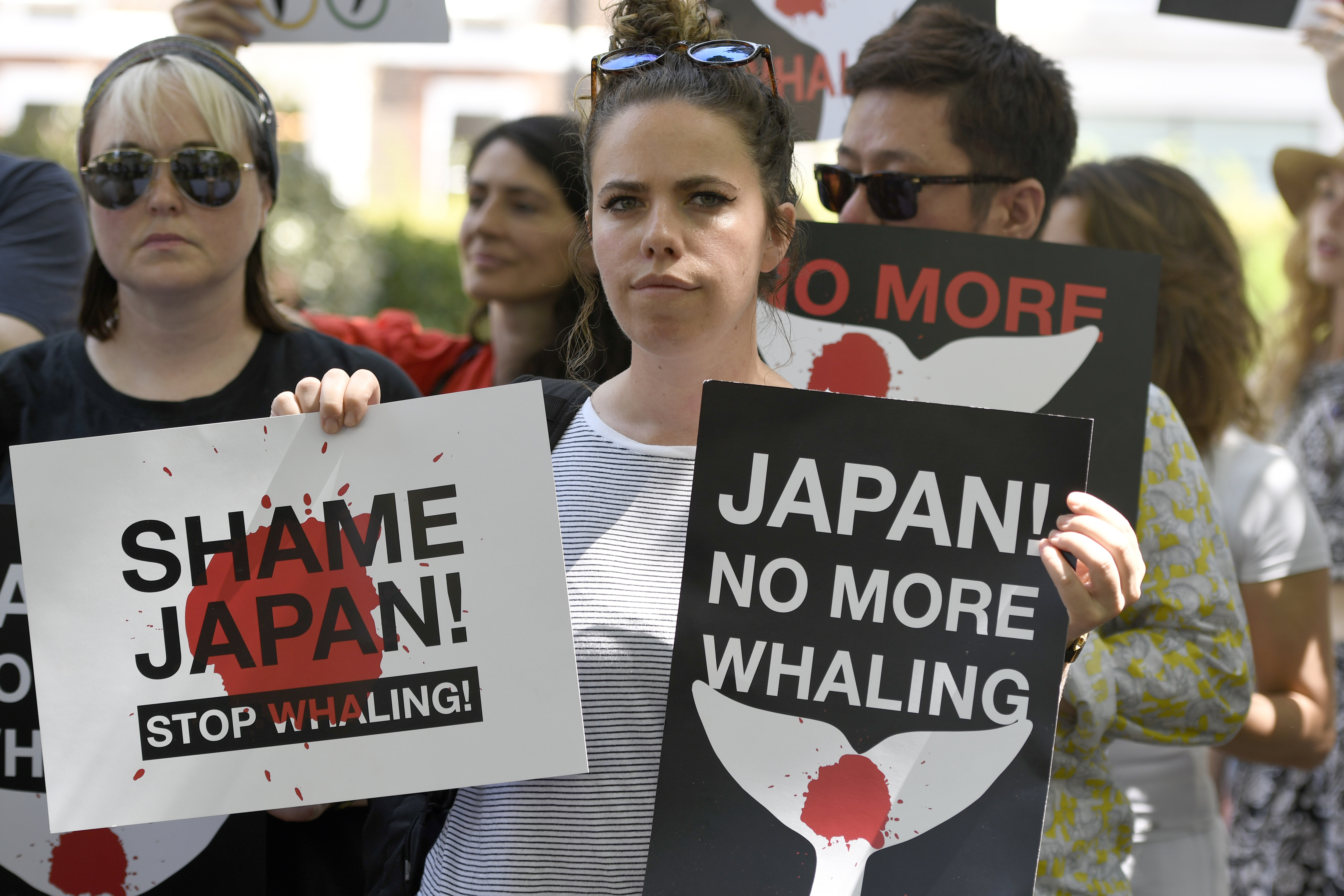 While the government maintains whale is a big part of traditional food culture, it accounts for 0.1 per cent of meat consumed according to the Japan Times, and instead, the number of whale watchers in the country has more than doubled between 1998 and 2015.

Danny adds: "WDC has campaigned on many fronts to stop whaling by exposing illegal practice, helping countries to promote responsible whale watching rather than killing to generate revenue, and working within the EU parliament to try to stop meat transiting through EU ports (including the UK).

"One of the ways the public can help is by refusing to eat whale meat whilst visiting Iceland, Norway and Japan and, instead helping to support the local economy by going out on a responsibly organise whale watching trip."