A husband who murdered his wife and chopped up her body after she accidentally defrosted a bag of frozen chips has been jailed for life.

Takeaway delivery driver Thomas McCann flew into a rage last May and strangled spouse of 24 years Yvonne when the couple were forced to throw away the £3 bag after she forgot to put them in the freezer at their home in Stockport.

Afterwards McCann, 49, dismembered the body of his 46-year old wife using a Stanley knife and a tree lopper, before dumping her remains in eight different plastic bags at a nearby recycling centre.

The father-of-three then used his victim’s mobile phone to send messages to their children pretending to be his wife and detailing the row over the chips.

McCann, of Brinnington, Stockport previously admitted to murdering his wife and was today jailed for life – with a judge ordering he serve a minimum of 13 years and four months before he can be considered for parole. 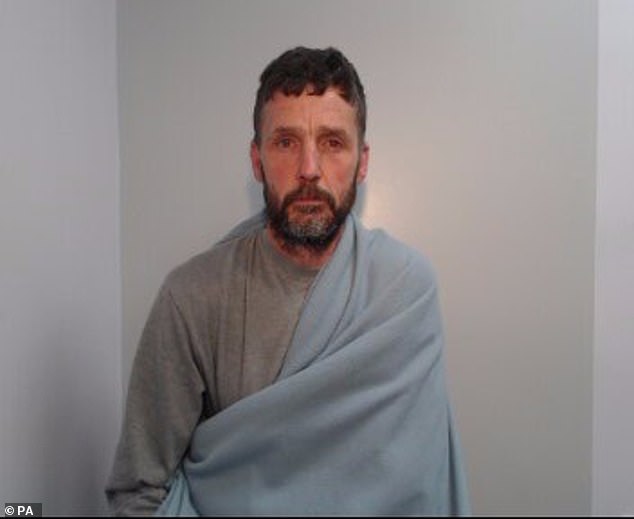 Thomas McCann has been jailed for life after admitting to murdering his wife at their Stockport home last May. Manchester Crown Court heard he flew into a rage over a £3 bag of chips that his wife of 24 years had accidentally let defrost 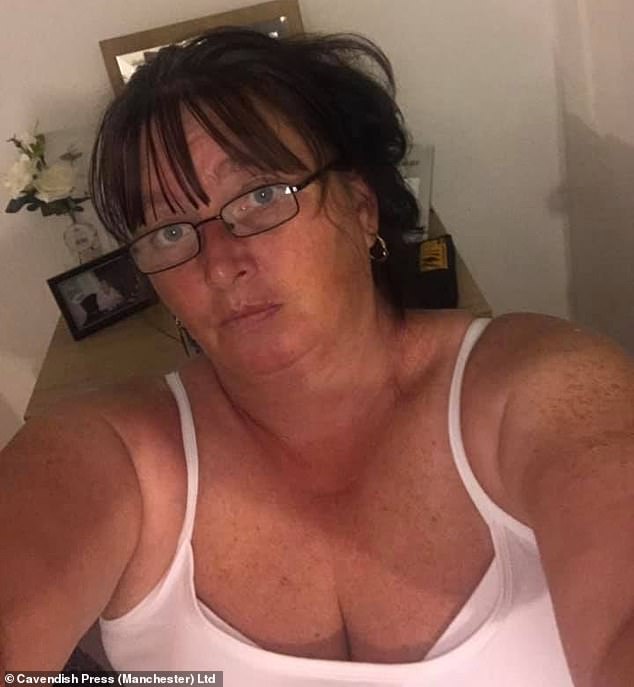 The court heard the couple had three children, met as teenagers and had been together for 32 years until McCann attacked Yvonne last May

Some of the texts he sent to the couple’s daughter but which purported to come from kitchen assistant Mrs McCann read: ‘I was planning on ending it with your dad this weekend until your dad p***ed me off over chips.

‘I should not have left the chips out. It’s only £3 but that’s not the point is it.’

Some of Mrs McCann’s remains were found later by a woman walking her dog at Reddish Vale Country Park, near Stockport, Greater Manchester.

The killer spent four days denying murder in police interview before confessing: ‘I killed my wife and disposed of her like garbage.’

Only 50 per cent of her remains have been found.

‘She was loved by so many people. Many of those people also care a great deal for you and are devastated by what happened. Rachel put it well when she said she is really struggling with this.

‘It was not just her death but the manner of her death at your hands has caused so many people so much grief.’ 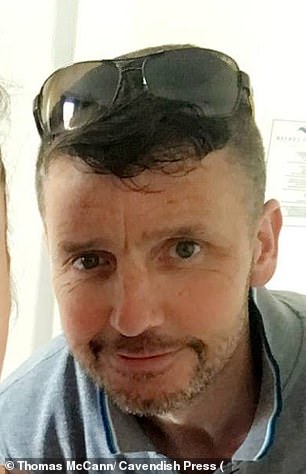 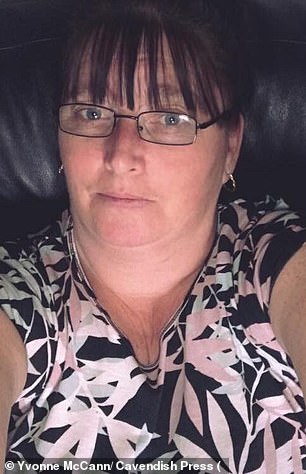 McCann, 49, dismembered the body of his 46-year old wife using a Stanley knife and a tree lopper, before dumping her remains in eight different plastic bags at a nearby recycling centre.

The court heard the couple were childhood sweethearts and after marrying in November 1996 had three children all now in their 20s.

‘During that argument it is clear he attacked her and strangled her to death in her bathroom. He dismembered her body and tried to dispose of her at a local recycling centre in Reddish Vale Country Park.

‘As a result of his initial failure to help police only 50 per cent of her body was recovered.

‘On May 25 a woman was walking her dogs in the country park with her partner when she saw a body in the undergrowth. Police later recovered a further seven bags containing her body parts. 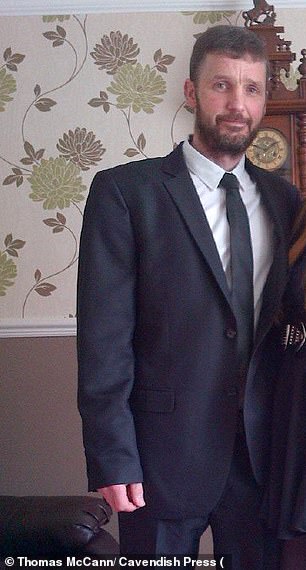 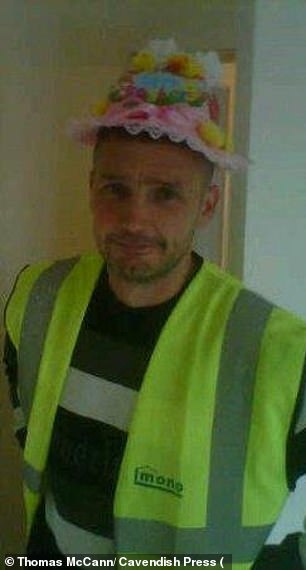 ‘It was not until 9.14pm that evening that the defendant called police to report his wife was missing.’

He added: ‘A neighbour heard an argument between them and they texted the victim asking if everything was OK.

‘The victim responded saying they had been arguing over frozen chips but it is unclear whether the defendant or the victim had responded to that text from the neighbour.

‘It is clear that very soon after the defendant was operating the victim’s phone and was seen leaving the house to collect bags and other items from his truck.

‘After he killed her he was using her phone sending messages suggesting she was still alive.

‘During that time their son Callum invited them both to a BBQ the next day and the defendant used his wife’s phone to reply ‘OK call round if home, your dad’s a m*** so he might be on his own.’ 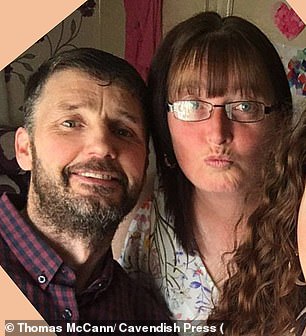 After strangling Yvonne (right), Thomas then used a Stanley knife and a tree lopper to chop up her body

‘At the time he was dismembering the body and while doing so he continued to send texts.

‘He texted their daughter Rachel as her saying she “should not have left the chips out, it’s only £3 but that’s not the point is it”.

‘As her, he then messaged Rachel saying “she might not go to the BBQ” and referred to the frozen chips again.

‘Later, as himself, he messaged his wife’s phone and apologised about the chips and was later seen leaving his home and carrying numerous bin bags into the car.

‘That evening Rachel messaged her mum asking if she was at home and the defendant used his wife’s phone to respond: ‘I think I’m pregnant, I don’t know what to do. I was planning on ending it with your dad this weekend until your dad p..sed me off over chips.’

‘Throughout this time the defendant continued to work delivering takeaways and he texted as his wife saying “I love you” before dropping a take away off for Rachel.

‘The next day he was captured on CCTV carrying two heavy bin bags from the car towards Reddish Vale Country Park before returning empty handed ten minutes later.

‘He sent a message to his wife’s phone saying “missing you so much, I hope we can sort this out, forgive me I don’t want to lose you”.

‘The following day he was seen carrying numerous items including black bin bags to a recycling centre before throwing them into a skip.’

McCann later took Rachel to buy groceries for the BBQ where he got drunk and was described as ‘stumbling and falling over.’ Suspicions were raised when he was taken home and found to have his wife’s mobile phone and ear rings in his pocket. 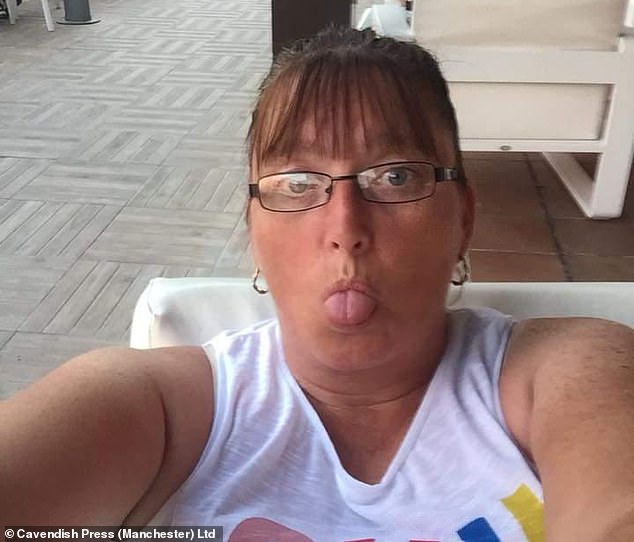 Mrs McCann (pictured) began to see another man around 2013, leading to her husband’s jealousy and relationship breakdown. Despite this, defence solicitors argued there was a ‘lack of premeditation’ in the murder last year

‘She was a full time mum to us, she would take us to school and always bought us things. We got whatever we wanted and never went without.

‘She absolutely loved sunshine and would take us on holidays abroad when she could. She loved music and would always have music on full blast when she cleaned the house.

‘We love our mum very much but we love our dad and realise he will go to prison for a very long time, but we hope he gets the help he needs.’

In mitigation McCann’s lawyer Kate Blackwell QC said: ‘There was a lack of premeditation on this case and all this blew up for a totally unnecessary reason. 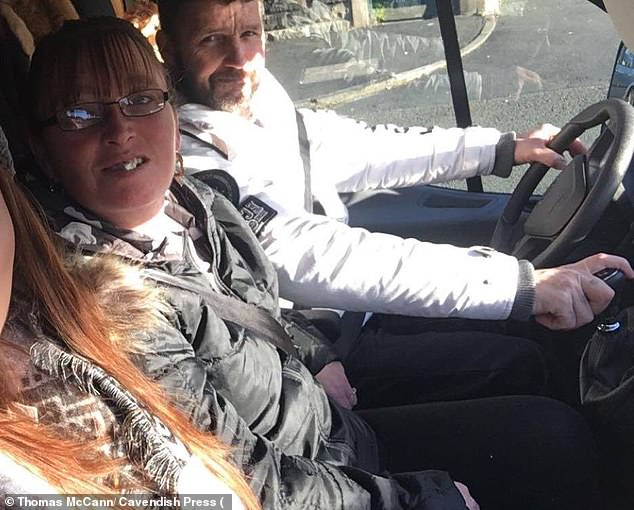 Despite discoveries of her body parts in a country park and council tip, only  50 per cent of Mrs McCann’s body has been recovered. Pictured: Yvonne and Thomas

‘Although there was unfaithfulness there is no suggestion he was anything but utterly committed to the deceased and there is nothing to suggest he did anything other than his best for his family until that day.

In a letter McCann said: ‘I would like to stress how truly, truly sorry I am to my wife’s family and my three children for the pain and suffering I have put them through.

‘I have to live with myself for my actions on top of the punishment I am going to receive.

‘I punish myself more and more as the days go past but this was my own doing. I ask that one day my three children may consider forgiving me for the pain and heartache I have put them through.

‘If they don’t that’s something I will have to get used to. I would like to stress how deeply, deeply sorry I am.’