Home » World News » ‘I feel like I’m mourning’: Can friendships broken in the pandemic be repaired?

After months of lockdowns, frustration is not only spilling out on city streets, but into our personal lives.

Businesses remain closed, children are still out of school and the reality of a world divided by vaccine status is dawning on us. 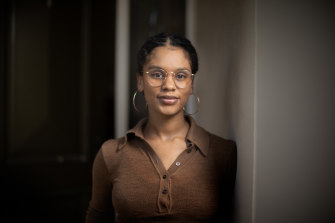 Kalida Edwards made the difficult choice to cut ties with family members to protect her unvaccinated children.Credit:Simon Schluter

People are emotionally frayed and on edge – and it’s claiming friendships and family ties.

The fallout in Kalida Edwards’ family, like many others, played out on social media.

“One of my cousins posted that mandatory vaccines are the same as racial segregation,” says the 29-year-old Melbourne mother, who is of Jamaican heritage.

For her, the vulnerability of her unvaccinated asthmatic child and new baby, and the fact she is a carer for one of her vulnerable grandparents, meant she needed to draw a boundary.

“From a black perspective, there is historically a bit of mistrust of the government and pharmaceutical companies and stuff that’s not unfounded,” she said. “But [I told her] I think we’re at a point now where, just factually, we can see the benefits of vaccinations and public health measures.”

Ms Edwards’ cousin screenshotted Kalida’s messages and posted them publicly. The conversation turned into an ugly family pile-on where many members took sides and argued in a thread over two days.

It was a similar situation for 49-year-old Sydney woman “Laura”, who did not wish to use her real name so she could speak publicly about her relationship breakdown with a friend of more than 30 years, after the friend became engrossed in vaccine conspiracy theories.

“We grew up together – were very close friends from the age of 14,” she says.

Laura is torn over ending the decades-long friendship, and her concerns over the friendship group – which includes immunocompromised people – being exposed to someone who refuses to get vaccinated against COVID-19.

“I feel like I’m mourning the death of a good friend who it’s shocked me to see how she’s presenting,” Laura says. “Maybe [she’s] not the person I thought – but secondly, I’m really concerned about where her messages could lead.”

Tamara Cavenett, a clinical psychologist and president of the Australian Psychological Society, says with Victoria and NSW set to open up, her clients are falling into unprecedented conflict with loved ones.

“This is the first time we’ve really contemplated opening up with risk – before that, it was always, ‘we’ve got back to zero, we’re good to go again’,” she says.

Clients are having disputes with family, friends and housemates about everything from how to ask who they have spent time with, interpretations of rules and whether they have been vaccinated.

“We often aren’t in conflict with people because if your needs don’t cross, then you don’t have a need to conflict,” she says. “Conflict happens now because suddenly choices of another person have an impact on others’ health.”

“We’ve never [before] had to have this conversation with every single friend or person you come across.”

She said while some relationships won’t survive the pandemic, others could be repaired – but it might take time.

“People’s moods are a bit frayed [at the moment] and they can become more angry or explosive that might not even be about the conversation at hand,” she says. “You may not be seeing who they are deep down – it may be that you’re seeing them in a really tough position.”

“You don’t have to finish the conversation,” she says. “You can say – let’s come back in a few months and see where we’re at.”

Relationships Australia manager Anastasia Panayiotidis said she believed it was possible for people to stay friends or connected as family even if there were disagreements about major issues like vaccines.

“Every individual needs to figure out what their values are, what their understanding is of a situation and what’s negotiable and non-negotiable for them,” she said.

“Then it’s an accepting that that’s the decision someone’s made and respecting that, but being clear about what your boundaries are.”

For now, Ms Edwards has decided to cease contact with her cousin and other family members who she used to spend Christmases and family birthdays with.

“My family’s really split down the middle now,” she says. “It is super sad.

“But it’s a non-negotiable at this point for me,” she says. “I’m not going to be soft with letting people just kind of go down this road.“

If you need professional help navigating relationships during the pandemic, contact Relationships Australia on 1300 364 277 or find resources online.

Stay across the most crucial developments related to the pandemic with the Coronavirus Update. Sign up for the weekly newsletter.