An influencer who received ‘hundreds’ of unsolicited explicit images without consent over the last decade has backed a campaign to make cyber-flashing illegal.

Former glamour model Jess Davies, 27, from Aberystwyth, Wales, said she is left feeling ‘dirty’ when she receives the obscene images and is worried it has become ‘normalised’ online.

Cyber-flashing is when a person is sent an unsolicited sexual image on their mobile device by a stranger nearby through social media, messages or other sharing functions.

There is currently no law which directly addresses cyber-flashing in England and Wales, despite the act being made illegal in Scotland 12 years ago.

The feminist podcaster said she has become almost ‘numb’ to the unsolicited explicit photographs she receives every month. 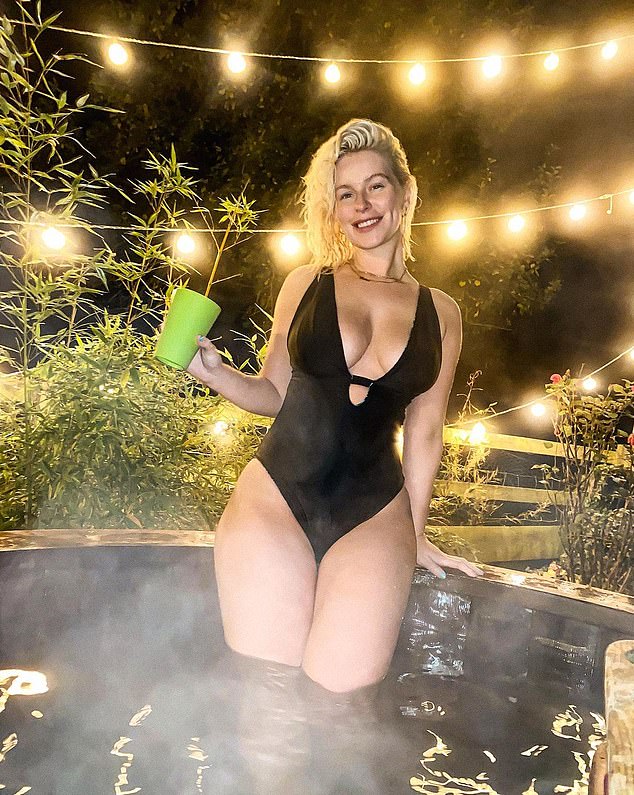 Jess Davies (pictured), 27, from Aberystwyth, Wales, has received ‘hundreds’ of unsolicited explicit images without consent over the last decade 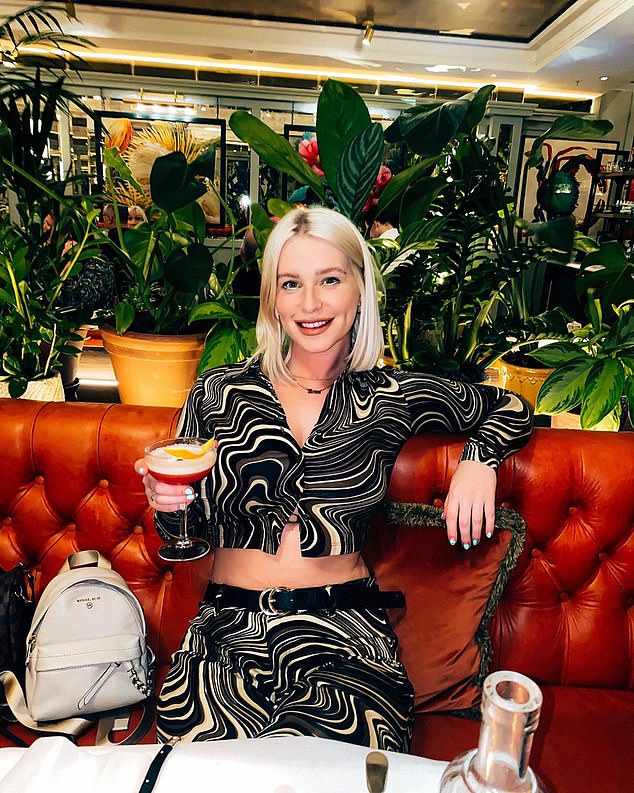 She said: ‘I am probably cyber-flashed every month, maybe more, depends really on what I share.

‘This has been going on for 10 years. I’ve probably received literally hundreds of these images. The kind of stuff I get is close-up shots, or of them performing a sex act.’

Speaking to the BBC, she added: ‘When I receive the images it makes you feel a bit dirty and you start thinking, “why me? Why have they sent them to me, is it something I’ve done?”‘

Writing about the campaign on Instagram, Jess said she ‘firmly believes’ cyber-flashing should be illegal because it seeks to ‘shame and dehumanise’ an individual.

She wrote: ‘If you had thousands of men flashing women in the street, that is illegal and would start a huge conversation around the safety of women and the standards within society. It happens online and people laugh and seek to point blame. ⁣

‘The individuals who find it okay to send images of their genitals and sex acts to someone should be investigated, we know that public flashing leads to more serious crimes as seen in the tragic cases of Sarah Everard and Libby Squire. That same energy should stay for the perpetrators of online violence. ⁣

‘We need to stop normalising this criminal act and I will continue to campaign for cyber-flashing to be made illegal in England and Wales for the safety of women.’ 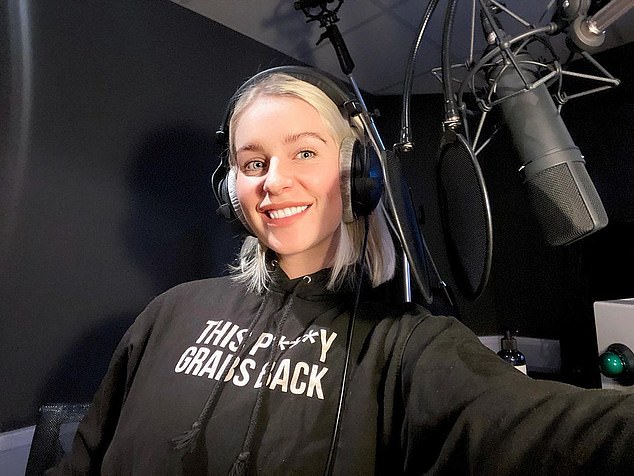 Writing about the campaign on Instagram, the feminist podcaster said she ‘firmly believes’ cyber-flashing should be illegal because it seeks to ‘shame and dehumanise’ an individual

This comes as a joint committee of MPs are set to publish a report on the draft Online Safety Bill on Tuesday, which would put a new legal duty of care on social media giants to protect their UK users from harmful material.

Research by YouGov found that four in ten millennial women have been sent a picture of a man’s genitals without consent, while data by Bumble suggested that this figure could be even higher.

Findings from the dating website revealed that 48 per cent of those aged 18 to 24 have received an unsolicited sexual photograph in the last year alone.

What is cyber-flashing and is it illegal?

Cyber-flashing is the act of someone deliberately sending a stranger an unsolicited sexual image using the AirDrop feature on an iPhone. These images are typically of male genitalia.

AirDrop, which is specific to iOS devices such as iPads and iPhones, as well as Apple Macs, uses Wi-Fi and Bluetooth to connect over a short range to other devices.

People are often targeted by cyber-flashing through AirDrop on public transport due to the technology’s short range.

There is currently no law which directly addresses cyber-flashing in England and Wales, despite the act being made illegal in Scotland 12 years ago.

Cyber-flashing was criminalised in Scotland under Section 6 of the Sexual Offence in 2009, while a similar measure was also passed in the Texas Senate unanimously in May 2019.

Police investigated the first ever case of cyber-flashing in 2015 after an unwanted graphic picture popped up on a shocked London commuter’s iPhone.

Bumble found that women are disproportionally recipients of the explicit photographs, which are sent on social media, messaging apps, Bluetooth, AirDrop and WiFi.

It comes after similar measures have been passed in other countries, including Scotland and areas in the US, with Bumble calling for England to also criminalise cyber-flashing.

Cyber-flashing was criminalised in Scotland under Section 6 of the Sexual Offence in 2009, while a similar measure was also passed in the Texas Senate unanimously in May 2019.

The House Bill 2789 came into force on September 1, 2019, and ruled that sending a lewd photograph without consent was punishable by a fine of up to $500.

Earlier this year, a Conservative MP called for cyber-flashing to be made a criminal offence to stop Britons sending X-rated snaps to strangers using the AirDrop function on their iPhones.

Fay Jones, 35, MP for Brecon and Radnorshire, has called for ‘digital flashing’ to be made a criminal offence.

She told MPs in January: ‘The scourge of cyber-flashing – where unwanted and unsolicited indecent photographs are distributed to mobile devices – needs to be made a criminal offence.’

Responding, Home Office minister Victoria Atkins said: ‘We are running a call for evidence at the moment on producing a new violence against women and girls strategy,’ adding: ‘I am very, very aware of the offence about which she speaks and I very much want those sorts of 21st century online crimes to be dealt with.’

Later, Labour MP Liz Twist said: ‘Will the minister look again at introducing a statutory duty on public authorities to train frontline staff to recognise the signs of domestic abuse?’

Ms Atkins replied: ‘I see this as very much part of our overall efforts to ensure that people understand what domestic abuse is, the many forms it can take, and how it is everyone’s business.’

Police investigated the first ever case of cyber-flashing in 2015 after an unwanted graphic picture popped up on a shocked London commuter’s iPhone. 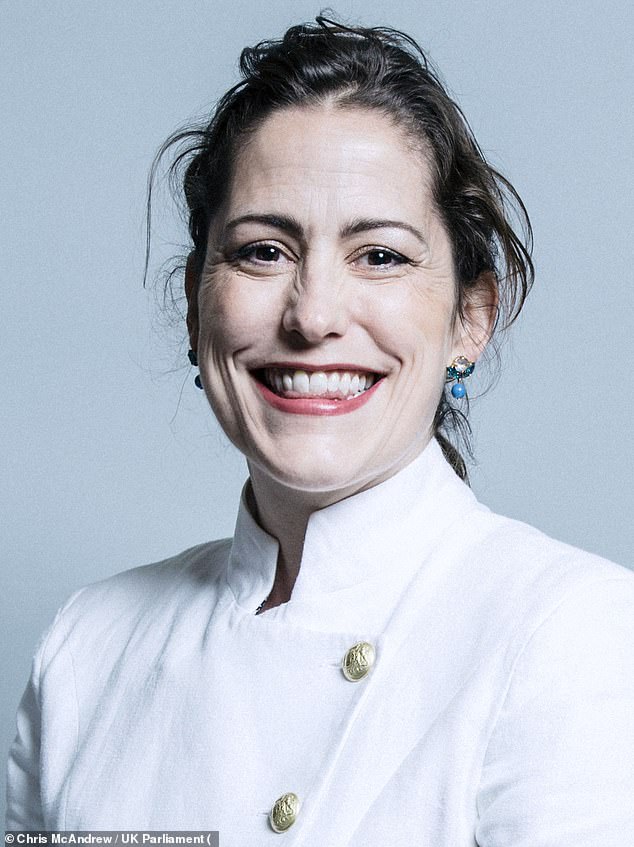 Home Office minister Victoria Atkins (pictured) said: ‘I very much want those sorts of 21st century online crimes to be dealt with’

Figures published by the British Transport Police show there were another 35 offences recorded in the first half of 2019 compared to 34 for the whole of 2018.

The number of reported cases is also thought to be much lower than the actual number of instances, partly due to the fact that cyber-flashing is not in itself a crime.

Some cases can be investigated under current public decency laws, or the Malicious Communications Act, but there are currently no specific provisions for cyber-flashing.

Professor McGlynn, an expert in the legal regulation of pornography, image-based sexual abuse and sexual violence, says that the Ministry of Justice ‘so far just keep refusing to act’ despite a number of reports and calls for change in legislation.

She argued that, regardless of the ‘tangible impact’ of cyber-flashing, it remains a ‘breach of civil liberties’.

‘Cyber-flashing infringes our right to everyday life, a life without looking over our shoulder, worrying what’s around the corner.’

AirDrop, which is specific to iOS devices such as iPads and iPhones, as well as Apple Macs, uses Wi-Fi and Bluetooth to connect over a short range to other devices.

Its default setting is for ‘contacts only’, which means only people you know can see you.

But to share information with other people, users can make a change to the settings and change it to ‘everyone’.

The setting allows anyone to send an image to that device where – unlike other messages apps such as WhatsApp or SMS – the photograph automatically appears on the screen.

It is then up to the user to choose to ‘accept’ the image, although they will have already seen a preview.