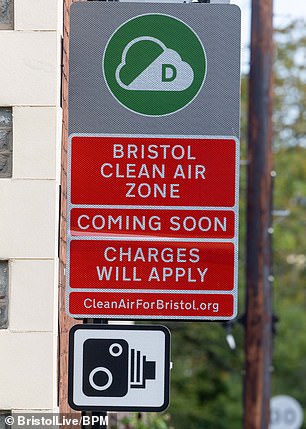 Drivers are wrongly being targeted for pollution offences because cameras are misreading number plates.

Car owners living as far as 150 miles from a new clean air zone in Bristol have been sent warning letters.

They are sent out to drivers whose cars do not meet emissions standards in the zone, which is scheduled to go live on November 28.

But some of the monitoring cameras have developed issues reading plates containing the letter ‘Y’.

Ian Hughes from Merseyside was warned he would be fined if he used the zone again once the scheme goes live – despite not having been anywhere near the city.

‘Since putting this on the Bristol City Council Facebook page I’ve been contacted by several other people who have had the same experience,’ he told BBC Radio Bristol.

The council says 71 per cent of vehicles comply with emission standards and escape the £9 daily fee. It blamed the errant notices on maintenance work.

A motorist from Wigan, and a woman from Kent who has never driven outside of the county were amongst those who also said they had received warning letters.

Money received through the scheme will be reinvested into the city.

A council spokesman said the faulty ANPR cameras may have been affected by maintenance work during a three-week trial in September.

He added: ‘If you weren’t in Bristol in September, ignore the letter.’