FBI documents detail hundreds of UFO sightings by pilots, police officers and soldiers – and include chilling tales of 27,000mph craft, crashes with no survivors, and alien bodies.

The Sun Online delved into the FBI archives and uncovered reports of scores of mysterious craft which were investigated by federal agents amid a flurry of sightings in the 1940s. 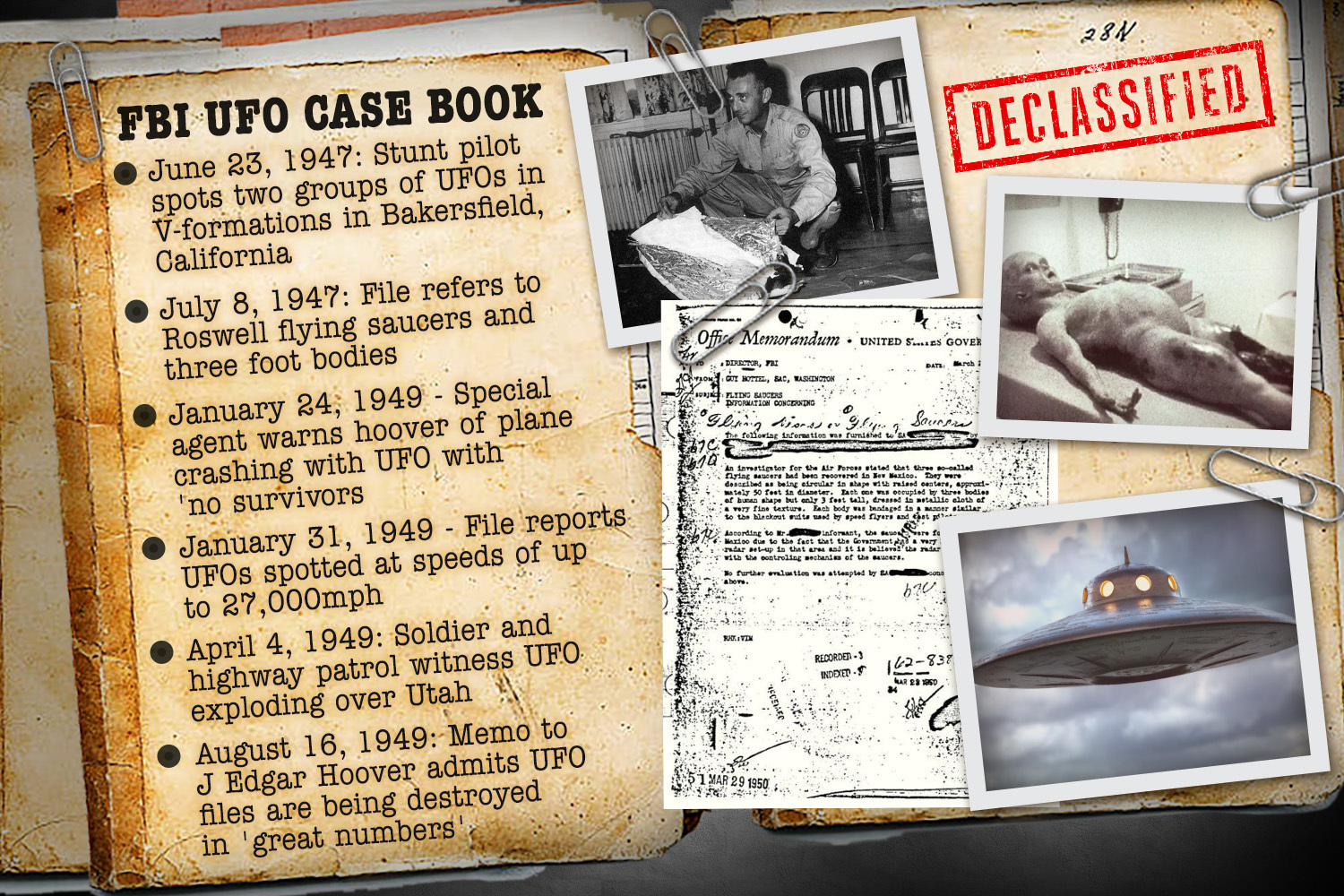 Modern interest UFOs has surged following the publication of a landmark Pentagon report in June that saw the US admit for the first time there is something in their skies they cannot explain.

But now The Sun Online can reveal the true depths of this phenomena dating back decades as the US's top law enforcementthe FBI probed many reports of strange objects.

This was especially so during 1947 when hundreds of UFOs were reported across the US.

And that was year of course of the world's most high-profile UFO sighting – the Roswell Incident.

By examining declassified docs, The Sun Online has found hundreds of FBI files from that year that demonstrate the intense interest in.

Many came from credible sources – and sensationally there are likely even more, but documents prove files were destroyed in their droves.

They claimed they were of no interest – and stated it was just to stop the accumulation of "very bulky files".

Other documents we detail here described UFOs moving at hypersonic speeds – and even reports of a crash that "disintgrated" a packed transport plane.

The Roswell Incident occurred on July 8 and unfolded in the Roswell Army Air Field (RAAF) in New Mexico.

The base distributed a press release claiming they had recovered the remains of a “flying disc” that had crashed in the desert.

Unsurprisingly, the sensational news made for some extraordinary headlines.

Yet the very next day the US Army backtracked and released a second statement claiming the recovered object was actually a weather balloon.

Few, however, are in the public domain relating to the famed event – but intriguingly there is a teletype report dated July 8 1947 of a “flying disc”.

This object was dismissed as a high-altitude weather balloon found near Roswell, stating “no further investigation” was being conducted.

But curiously another memo written in 1950, which was released with a huge cache of declassified documents, contains a remarkable statement from special agent Guy Hottel about Roswell. 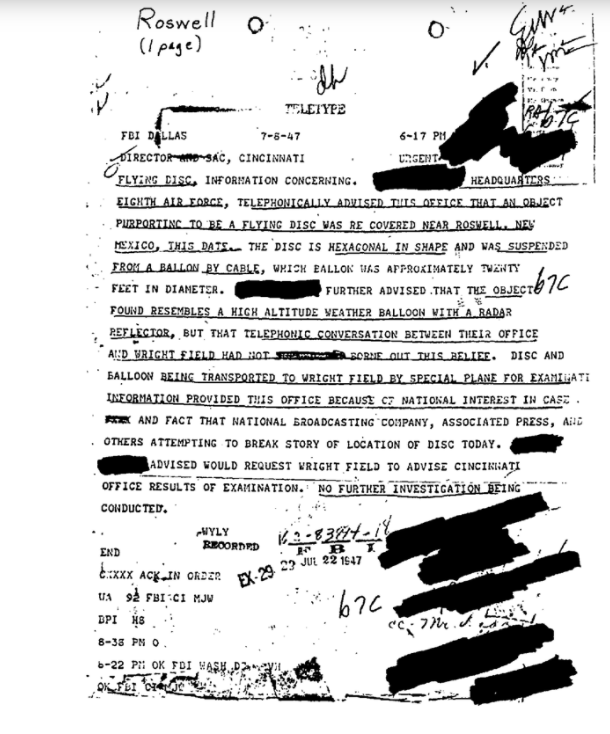 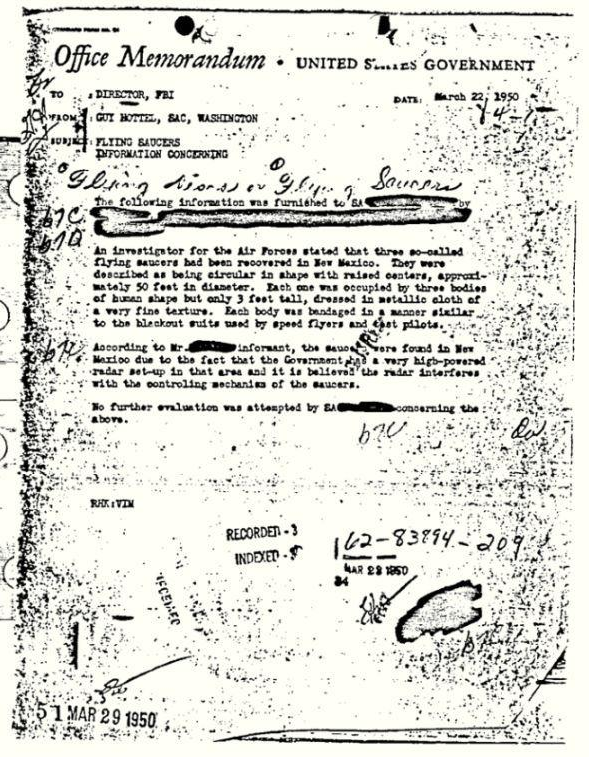 Agent Hottel said "three so-called flying saucers had been recovered in New Mexico" and were "described as being circular in shape with raised centres, approximately 50 feet in diameter".

He went on to say: "Each one was occupied by three bodies of human shape but only three feet tall."

The bodies, he reported, were "dressed in a metallic cloth of a very fine texture".

He added: “Each body was bandaged in a manner similar to the blackout suits used by speed flyers and test pilots."

But while files on the 1947 Roswell incident are believed by some ufologists to be classified — as part of what’s been dubbed as a “truth embargo” — hundreds of pages detail reports on UFOs.

One of the first files to be declassified that year reports a sighting by stunt pilot Richard Rankin, who saw two flights of a group of objects at Bakersfield, California, on June 23, flying at incredibly high speeds in a V-formation.

The following day veteran pilot Kenneth Arnold reported nine “peculiar looking” saucer-like aircraft, further north over the Cascade Mountains of Washington which were flying a “diagonal chain-like lines as if they were linked together”.

In an interview he told an FBI agent, he said: “The more I observed the objects, the more upset I became, as I am accustomed and familiar with most objects flying.

“I would have given almost anything that day to have a movie camera with a telephoto lens.

“It is as much a mystery to me as it is to the rest of the world.”

The object moved from an intermediate altitude in an oscillating fashion, almost to the surface of the ground and then started climbing again

About the time of the New Mexico Roswell incident, an FBI agent interviewed a serviceman in a Muroc Army Airfield in California.

In an affidavit, the soldier says: “At approximately noon on July 6 1947, my attention was called to an object in the air.

“It appeared to be metallic because the method in which it was flying caused the sun to reflect like an apparently aluminum coloured surface.

“The object moved from an intermediate altitude in an oscillating fashion, almost to the surface of the ground and then started climbing again.”

Other soldiers on the base gave other reports of the “yellowish and white” object.

Another declassified document from April 4, 1949 tells how three men, on patrols miles apart, each reported seeing a UFO break up over mountains north of Salt Lake City.

Their accounts were sent to Edgar Hoover, the director of the FBI, in a memo titled "Flying Discs". 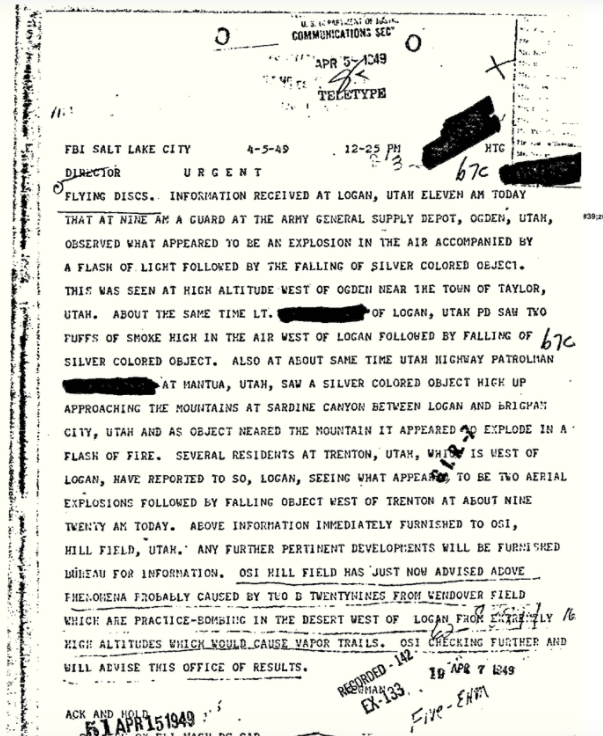 The file said that a policeman, a highway patrolman and an army guard all "saw a silver coloured object high up approaching the mountains at Sardine Canyon" that "appeared to explode in a rash of fire".

And another file sent to Hoover, dated January 31, 1949, reveals the sighting by a pair of airline pilots.

They reported the "rocket ship" shaped object with no wings was hurtling out of a thunderhead at speeds of 2700mph.

And elsewhere in the document, further sightings are mentioned that can hit speeds of 27,000mph.

"No scientific experiments are known to exist in this country which could give rise to such phenomena," writes the agent from the San Antonio office.

He warned he had heard a report of a transport plane in Czechoslovakia which collided with an "unidentified missile".

"The missile and the transport were completely disintegrated without recovery of parts or survivors," Ladd wrote. 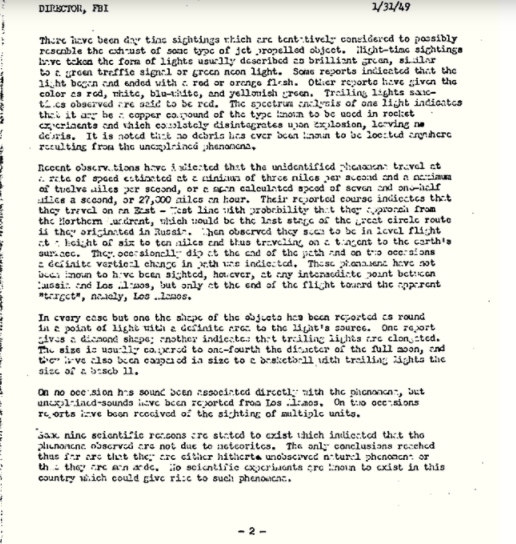 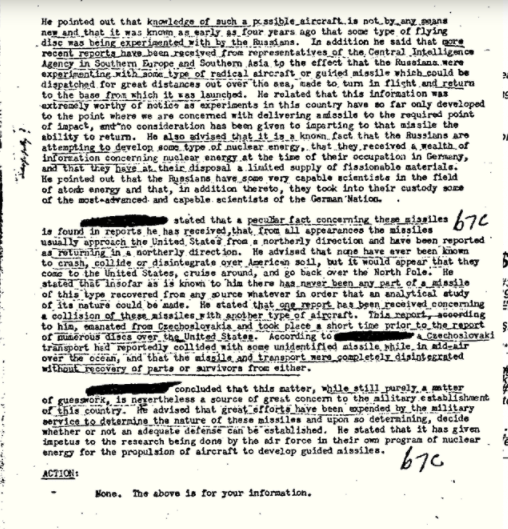 CIA files have also revealed bizarre sightings and events – as ufologists try to piece together decades of lost history on the phenomena.

Documents detail the extraordinary moment US fighter jets allegedly chased a group of UFOs over a nuclear base before the objects flew off into space.

The declassified files, released under a freedom of information request, say the mysterious phenomena was detected on radar near Malmstrom Air Force Base, Montana, in November 1975.

It was revealed as last month a group of former nuclear base commanders claimed their nukes were disabled by UFOs in the 1960s and 1970s.

The photos appear to be absent from the declassified file – but they were taken by officials from an experimental nuclear energy propulsion unitfor the US Army.

Both names are redacted – and the report notes the photos had been determined to be real after study of the negative.

It is claimed the UFOs were travelling at "unbelievably tremendous speed" .

US officials dismissed UFOs at the conclusion of Project Blue Book in the 1960s – stating there was nothing to see.

And yet now around five decades on the debate has returned and is now being treated as a serious national security issue.

The debate which was for decades considered a fringe and damaging topic is now being openly spoke about by very senior figures, including former President Bill Clinton and Barack Obama.

US lawmakers commissioned the Pentagon UFO report after a stunning string of leaked videos which showed military encounters with objects such as the infamous "Tic Tac".

The Sun Online revealed that week that at an event in Washing DC, the US's top spy chief Avril Haines became the most senior figure to acknowledge that UFOs could be of "extraterrestrial" origin.