Japan fell silent today to mark 10 years since the worst natural disaster in the country’s living memory: the powerful earthquake, deadly tsunami and Fukushima nuclear meltdown that traumatised a nation.

A minute’s silence was observed across the country at 2.46 pm local time , the precise moment a 9.0 magnitude quake hit off the northeast coast on March 11, 2011.

Around 18,500 people were killed or left missing in the disaster, most of them claimed by the towering waves triggered by one of the strongest quakes ever recorded.

The ensuing meltdown at the Fukushima Daiichi nuclear plant blanketed nearby areas with radiation, rendering some towns uninhabitable for years and displacing tens of thousands of residents. 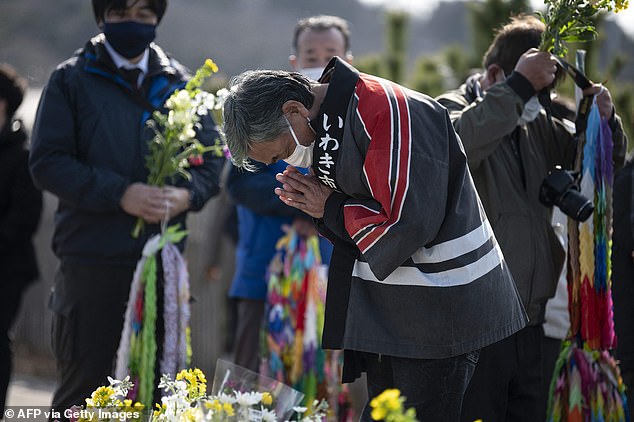 Prayer by the sea: A man bows his head by the coastline in Fukushima prefecture today, a decade on from the disastrous earthquake that caused a tsunami and nuclear disaster 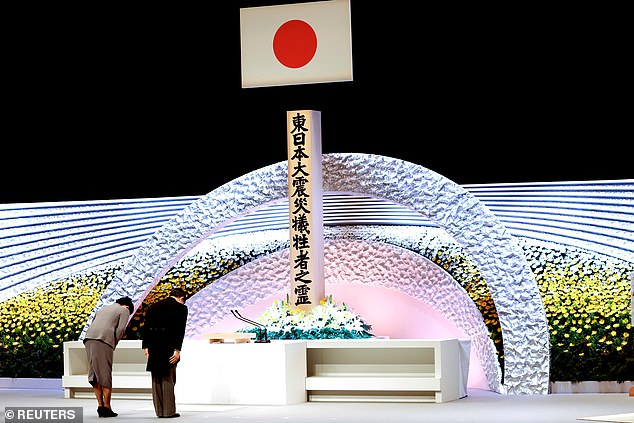 Imperial mourning: Japan’s emperor Naruhito and empress Masako bow at an altar in Tokyo commemorating the victims of the March 11, 2011 catastrophe 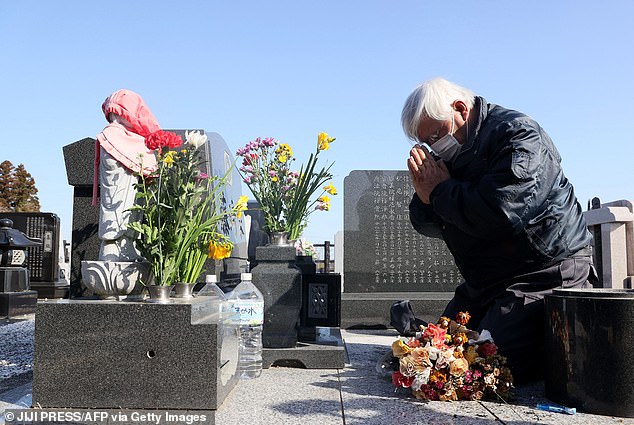 Grief: A local resident who lost his daughter in the disaster pays his respects at a cemetery in Namie on Thursday as Japan marks the 10-year anniversary of the earthquake 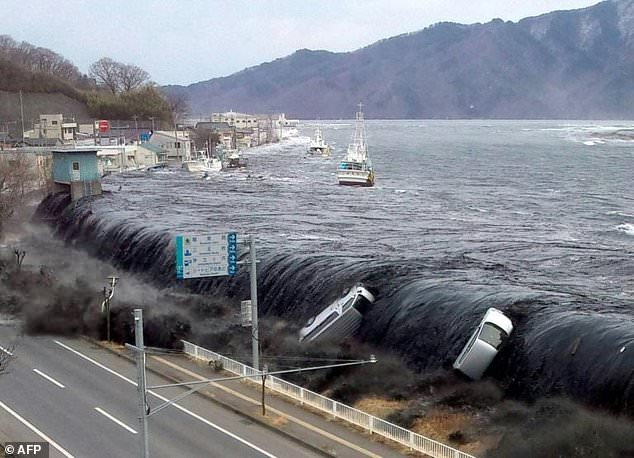 Overrun: Huge waves breach an embankment in the city of Miyako in Iwate prefecture, in the wake of the earthquake on March 11, 2011 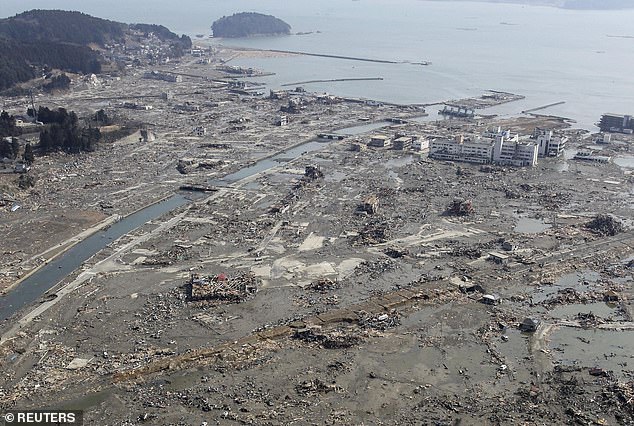 Devastated: A view from a helicopter shows the wreckage of Minamisanriku in north-eastern Japan two days after the tsunami

Speaking at a ceremony in Tokyo’s national theatre, Emperor Naruhito said the ‘unforgettable memory of the tragedy’ persisted a decade on.

‘Many of those afflicted, in spite of their having suffered from unimaginably enormous damage, have overcome numerous hardships by helping one another,’ he added.

The annual memorial event was held before a smaller audience than usual, with the capital and nearby areas currently under a virus state of emergency.

Japanese PM Yoshihide Suga said the challenges faced by survivors had been compounded by the pandemic and natural disasters, including a recent strong quake in the region, classified as an aftershock of the 2011 tremor.

But he said Japan had always ‘overcome every crisis with courage and hope’.

Private and public commemorations were seen across Japan as bereaved local residents laid flowers at graves and placed letters to missing family members into the sea. 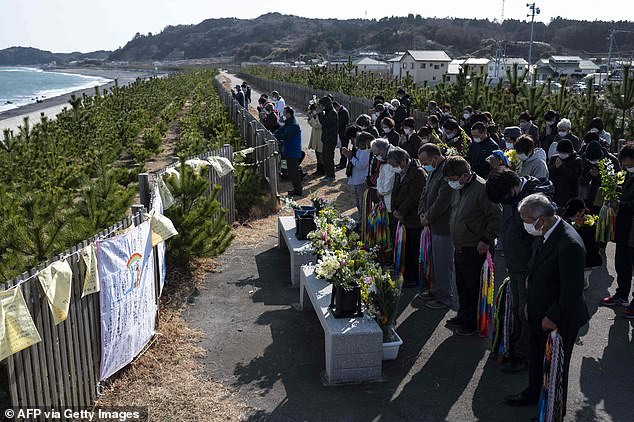 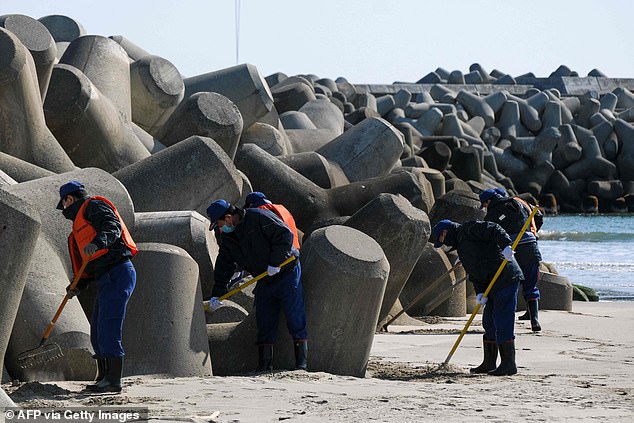 The search goes on: Members of the Tomioka fire brigade continue their hunt for traces of missing people on the shores near the Fukushima nuclear plant 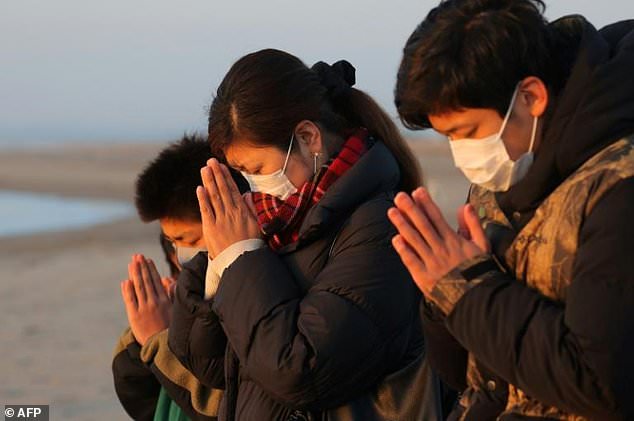 Private and public commemorations took place across Japan to mark a decade since the 2011 quake, tsunami and nuclear disaster 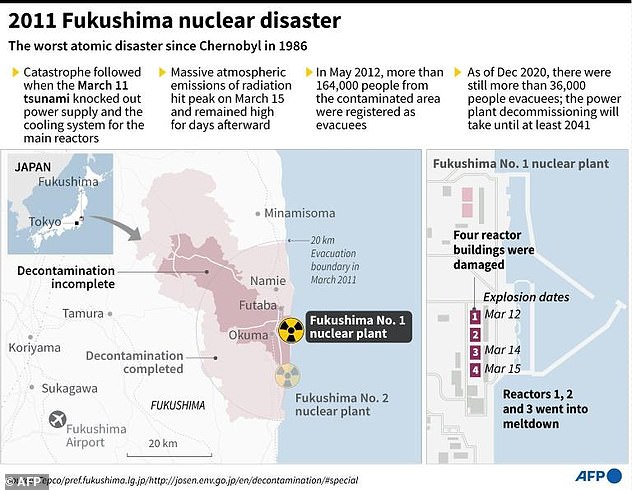 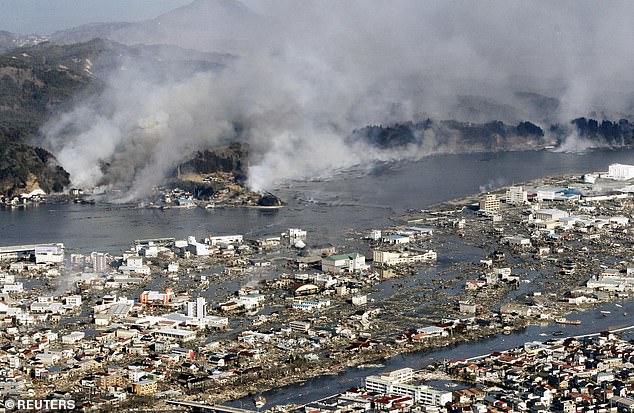 Smoke rises from Kesennuma on March 12, 2011, a day after it was overrun by the tsunami 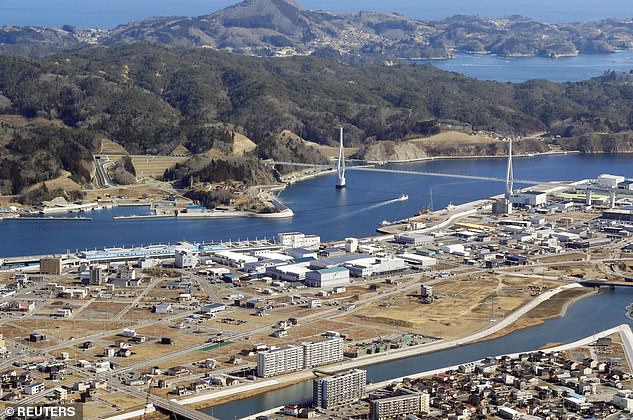 The same area of Kesennuma is pictured last month, a decade on from the disaster

Condolences have poured in from around the world, with everyone from UN chief Antonio Guterres to singer Lady Gaga offering their thoughts on the anniversary.

Searches for those still missing are taking place this week, as loved ones refuse to relinquish hope of finding them even a decade on.

The chances of success may appear slim, but just last week the remains of a woman missing since the tsunami were identified, in what her surviving son described as a chance to process his emotions and move forward.

As the sun rose in Fukushima prefecture’s Hisanohama, 78-year-old Toshio Kumaki walked along a giant sea wall built after the tsunami and offered a prayer.

Kumaki’s eyes filled with tears as he remembered the disaster. ‘It was really scary,’ he said.

Around 60 people were killed in Ohisa, one of the districts adjacent to the beach, when 23ft tsunami waves washed ashore, wiping away everything but a tiny shrine. 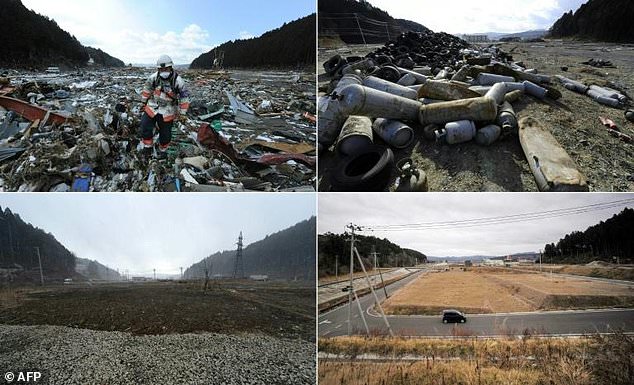 Some towns were rendered uninhabitable for years after the disaster which killed around 18,500 people 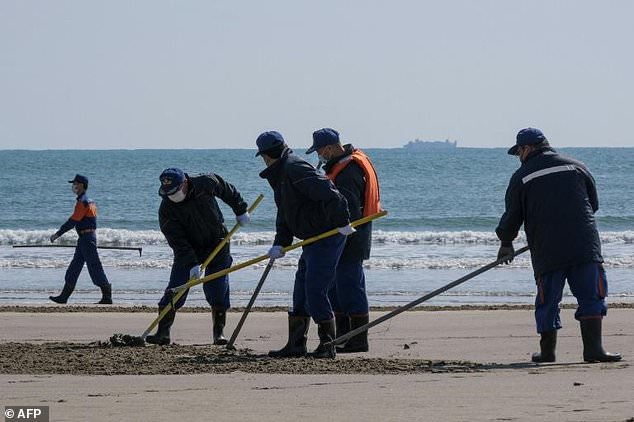 The anniversary comes just two weeks before the Olympic torch relay begins in Fukushima prefecture, nodding to efforts to make them the ‘Reconstruction Games’.

The pandemic has cast a long shadow over the Olympics, forcing their unprecedented year-long postponement, but the government and organisers are hoping the relay will bring the spotlight back to the region.

A decade on, the disaster has shaped Japan’s preparations for natural disasters, with many towns along the coast building new or higher sea walls.

Evacuation routes and plans have been refined and improved in a country that regularly deals with disasters ranging from typhoons to earthquakes.

Nayuta Ganbe in Miyagi’s Sendai city speaks often at events about disaster prevention, sharing his experience of the tsunami, but he usually marks the anniversary privately.

‘It’s the day when I lost my classmates. People died before my eyes. March 11 is a day that I hoped would never come again,’ the 21-year-old said.

But this year he has decided to participate in an event on the anniversary, hoping it will help him with the ongoing work of processing the trauma he experienced. 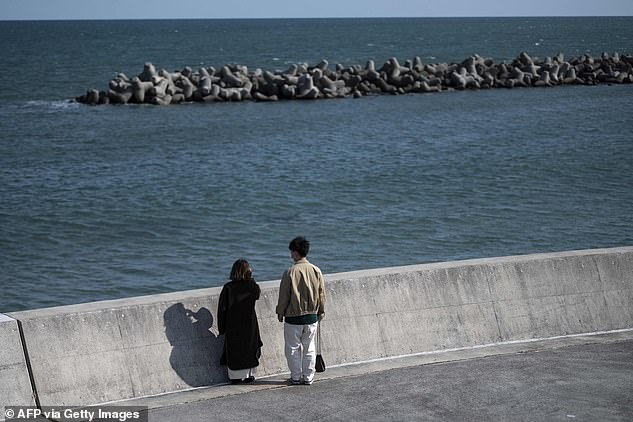 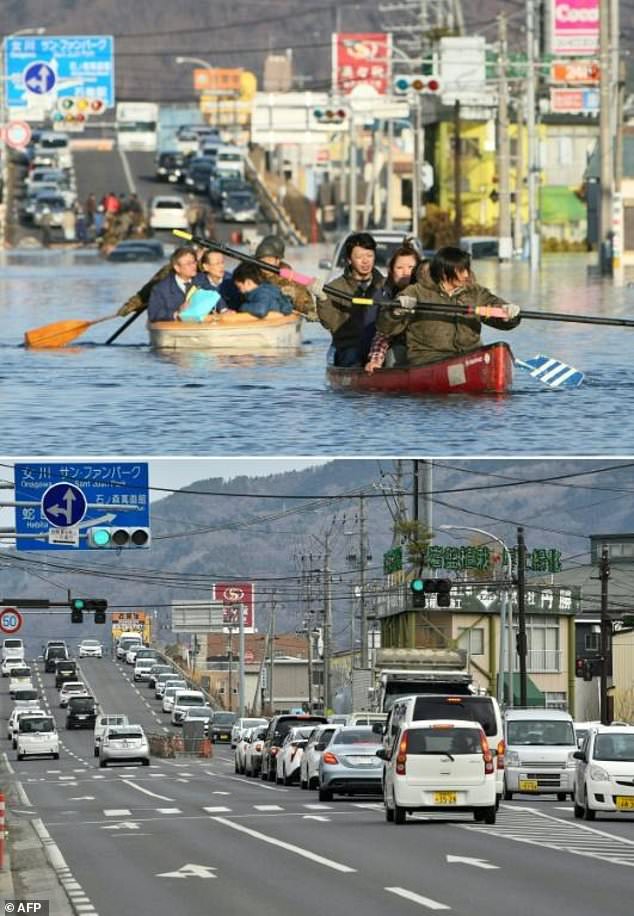 People (top) evacuated by boat down a flooded road in Ishinomaki on March 12, 2011; and the same area (bottom) is pictured nearly 10 years later 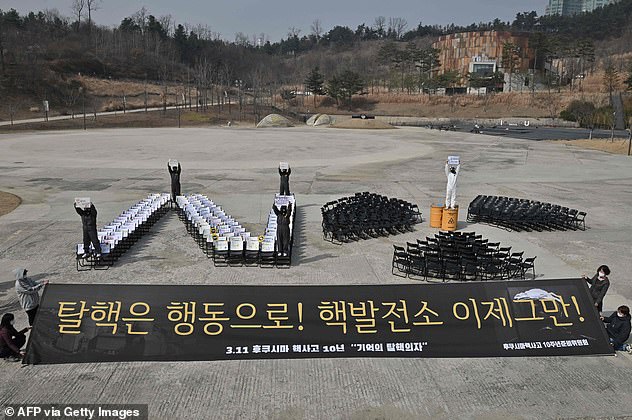 In South Korea, the anniversary prompted environmental activists to stage a protest in Seoul with a banner reading ‘no more nuclear power plants’

For others, the anniversary will be a moment for private reflection on a tragedy that continues to reverberate.

Tens of thousands of people who evacuated fearing radiation are still displaced, and around two percent of Fukushima remains off-limits.

Most of Japan’s nuclear reactors are still offline, and government plans to revitalise the sector are controversial.

Reverend Akira Sato, who ministered at several churches that in areas still largely off-limits around the Fukushima plant, will be spending the day in reflection at one of the churches he had to abandon.

‘Together with my wife, I will silently think back over the days of the disaster and offer a prayer.’