Japan is ordered to pay Korean women who its soldiers held as sex slaves $90,000 each in landmark ruling over atrocities

Japan has been ordered to pay $90,000 each to twelve South Korean women who were held as sex slaves during World War II in a landmark ruling on Friday.

The ruling in a South Korean court, that’s set to rekindle animosities between the Asian neighbors, ordered Japan to financially compensate the women who were forced to work as sex slaves for Japanese troops.

Known as ‘comfort women’, they were raped and sexually assaulted by up to 50 Japanese soldiers a day during the second world war and left with venereal diseases, unwanted pregnancies and ‘big mental scars’ in the women’s lives.

The court said Japan’s mobilization of these women as sexual slaves was ‘a crime against humanity.’

The Seoul Central District Court ordered the Japanese government to give 100 million ($91,360) each to the 12 aging women who filed the lawsuits in 2013 for their wartime sexual slavery.

Japan immediately protested the ruling, maintaining that all wartime compensation issues were resolved under a 1965 treaty that restored their diplomatic ties. 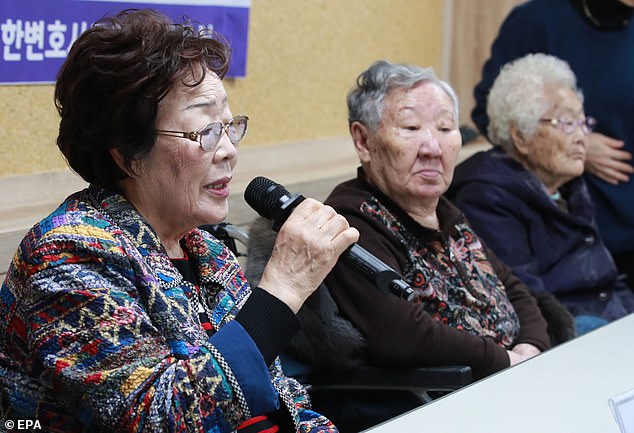 Japan has been ordered to pay $90,000 each to twelve south Korean women who were held as sex slaves during World War II in a landmark ruling in South Korea on Friday. Pictured: Former comfort women (left to right) Lee Yong-soo, Kil Won-ok and Lee Ok-seun

It said it happened when Japan ‘illegally occupied’ the Korean Peninsula from 1910-45, and its sovereign immunity cannot shield it from lawsuits in South Korea.

The court said the women were the victims of ‘harsh sexual activities’ by Japanese soldiers who caused them bodily harm, venereal diseases and unwanted pregnancies and left ‘big mental scars’ in the women’s lives.

About 240 South Korean women came forward and registered with the government as victims of sexual slavery, but only 16 of them, all in their 80s and 90s, are still alive.

Seven of the 12 women died while waiting for the ruling.

The proceedings in the case had been delayed as Japan refused to receive legal documents. 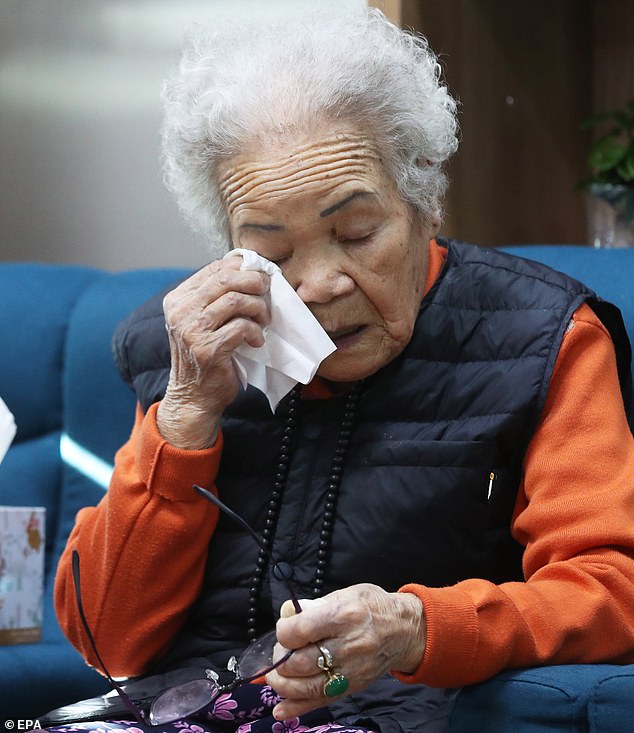 ‘Comfort women’ were forced to work as sex slaves to Japanese troops in the second world war. The court ruling at Seoul Central District Court said Japan’s mobilization of these women as sexual slaves was ‘a crime against humanity’. Pictured: Former comfort woman Lee Ok-sun

Another 20 women, some already deceased and represented by their surviving relatives, filed a separate suit against Japan, and that ruling is expected next week.

The women were among tens of thousands across occupied Asia and the Pacific who were sent to front-line Japanese military brothels.

Observers say it’s unlikely for Japan to abide by the South Korean court ruling. A support group for women forced to work as sex slaves said it may take legal steps to seize Japanese government assets in South Korea if Japan refuses to compensate victims.

South Korea’s Foreign Ministry said later Friday it respects the ruling and will strive to restore the dignity of the women. 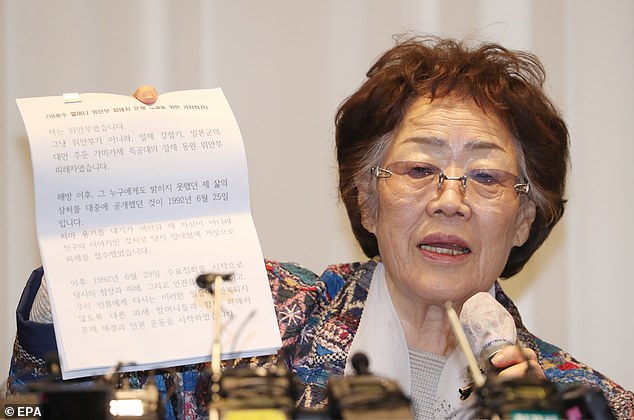 The court said the women were the victims of ‘harsh sexual activities’ by Japanese soldiers who caused them bodily harm, venereal diseases and unwanted pregnancies and left ‘big mental scars’ in the women’s lives. Pictured: Lee Yong-soo, a South Korean victim of Japanese military’s sexual slavery

It said it will examine the verdict’s possible effects on ties with Japan and make efforts to maintain ‘future-oriented’ cooperation with Tokyo.

Seoul and Tokyo, both key U.S. allies, are closely linked to each other economically and culturally. But their historical and territorial disputes stemming from Japan’s colonial occupation have often complicated Washington’s efforts to strengthen trilateral cooperation to deal with North Korea’s nuclear threat and China’s growing influence in the region.

Their relations plunged to one of their lowest levels in decades after South Korea’s Supreme Court in 2018 ordered Japanese companies to offer reparations to some elderly South Korean plaintiffs for their wartime forced labor.

The spat escalated into a trade war that saw both countries downgrade the other’s trade status, and then spilled over to military matters when Seoul threatened to end a trilateral 2016 military intelligence-sharing agreement involving the U.S.

In 2015, South Korea’s previous government reached a deal with Japan to resolve the sexual slavery dispute.

Under the deal, Japan offered a fresh apology and agreed to fund a foundation to support victims in return for South Korea stopping to criticize Japan over the issue on the world stage. But South Korea’s current government, led by President Moon Jae-in, took steps to dissolve the foundation, saying the 2015 deal lacked legitimacy because officials failed to properly communicate with victims before reaching it.

Who were the ‘comfort women’? 200,000 sex slaves were forced to serve the Japanese troops in WWII

Most historians agree that as many as 200,000 women, mostly from Korea, were forced to work in Japanese military brothels during WWII.

The plight of the women is a hugely emotional issue which continues to strain relations between South Korea and Japan today.

For many South Koreans, the issue symbolises the abuses of Japan’s 1910-45 colonial rule over the Korean Peninsula. 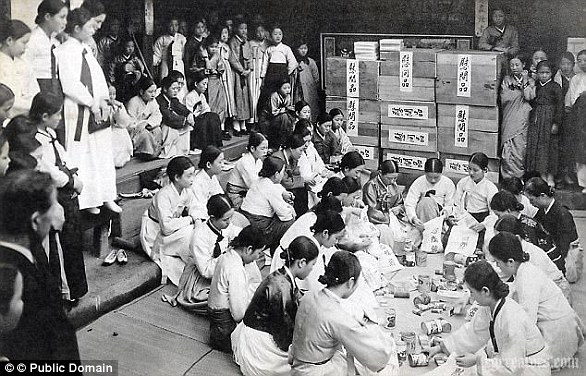 The term ‘comfort woman’ comes from the Japanese euphemism ‘jugun ianfu’ which refers to women, of various ethnic and social circumstances, who became sex slaves for the Japanese troops before and during WWII.

Military brothels existed across the Asia Pacific region in areas occupied by the Japanese forces, including China, the Korean Peninsula and a large part of South-east Asia.

The women were forced to have sex with up to 50 Japanese soldiers a day as they were raped and sexually assaulted.

Though around 80 per cent were Korean, women from China, Taiwan, the Philippines, Indonesia, Burma and the Pacific islands were also used as comfort women, according to a San Francisco State University report.

The authorities believed the comfort system would enhance the morale of the military and help prevent soldiers from committing sexual violence toward women of occupied territories, which became a real concern after the infamous Nanjing Massacre in China in 1937.

They were also concerned with the health of the troops, which prompted close supervision of the hygienic conditions in the comfort stations to help keep STDs under control.

Meanwhile many of the women who worked in ‘comfort stations’ during WWII were given repeated injections of the syphilis treatment compound 606, which left many of them unable to have children. 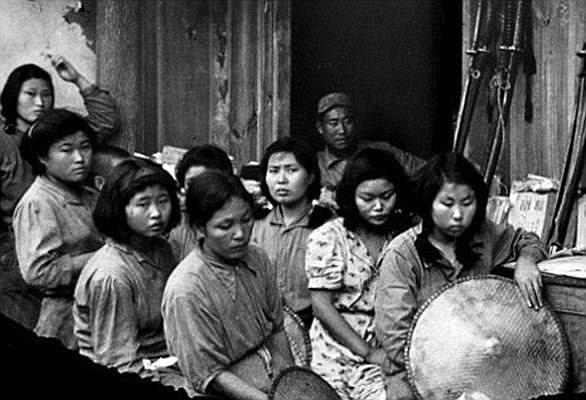 Up to 200,000 women were forced to work in Japanese military brothels during WWII

After the war, many of the women were brutally slaughtered and their story was untold until 1991.

The only military tribunal concerning the sexual abuse of comfort women took place in Batavia – now Indonesian capital Jakarta – in 1948.

Several Japanese military officers were convicted for having forced 35 Dutch women involved in the case into comfort stations.

The issue only began to emerge in Korea only in the late 1980s.

The Japanese government admitted deception, coercion and official involvement in the recruitment of comfort women in August 1993, but critics said they needed to go much further.