Former footballer Jarryd Hayne has been found guilty of sexually assaulting a woman at her Newcastle home.

Hayne, 33, faced trial in the NSW District Court on two counts of aggravated sexual intercourse without consent, recklessly inflicting actual bodily harm, after he assaulted the 26-year-old woman with his hands and mouth and left her bleeding from the genitals in September 2018. 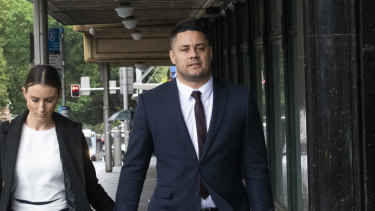 Hayne was formally convicted and will be sentenced at Newcastle at a later date.

The woman and Hayne had been speaking on social media for a few weeks, but they met for the first time when Hayne – who was in Newcastle for a buck’s weekend – stopped at her house on the evening of September 30 on the way back to Sydney.

He arrived at her home at 9.07pm, drinking a Vodka Cruiser, and left his $550 taxi waiting outside, claiming to the driver that he needed to pick up a bag. He left 46 minutes later.

The trial examined the conflicting accounts of what happened in that time, as well as messages and phone calls made before and after the incident. In one message, the woman told a friend Hayne had been “so rough that blood started pouring all over the bed because he tore my vagina”.

Hayne denied assaulting the woman and said their consensual encounter ended when he injured her accidentally, which surprised him as much as her. 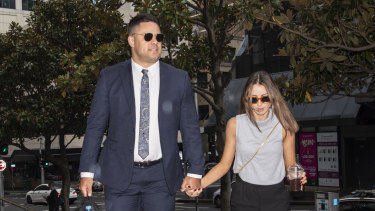 Mr Hayne pleaded not guilty and said the encounter was consensual.Credit:Louise Kennerley

In a series of phone calls intercepted by police in November 2018, Hayne described the woman as a “full-blown weirdo”, a “young cow” and a “f—in’ idiot” who got attached to him and started “blowing up” when he brushed her off. He said he would get her for defamation “easy”.

It was the second time a jury had deliberated on the charges. The first trial ended in December last year with a hung jury, after eight men and four women were unable to reach a unanimous verdict.

Jurors in the second trial were only informed that the first trial did not conclude, and were instructed not to seek out the reason why. The evidence of Hayne and the woman was replayed from the first trial – the woman with video and audio, and Hayne with just audio.

In her evidence, the woman said she did not consent to the sexual activity and “felt like an object … degraded and upset and angry”.

She said Hayne tried to kiss her and she said “no”, but he didn’t stop, and he pulled down her pants despite her efforts to hold them up.

“I think I froze in a way, because I can’t remember a massive struggle; it was just really confusing. But he knew I didn’t want it – I said ‘no’,” the woman said.

“It was forceful and fast. That’s why I can’t say for sure how the [genital] injury was done, whether it was his mouth, his teeth, his nails or a ring. I was numb.”

A doctor gave evidence that the two lacerations to the woman’s genitals were caused by the skin splitting after being stretched beyond its capacity to do so.

Hayne said the woman did not say “stop” or “no” at any stage. He said she was not happy after discovering the taxi waiting outside and didn’t want to have sex, but he “just wanted to please her” in other ways.

He said he used his hands and mouth on the woman and, during one of the sexual acts, he “felt the sense of a different liquid hit my lip” and jumped up in shock, looking straight at his hands to see blood.

Hayne said the woman was “a bit frazzled” and he reiterated that it was an accident and told her to go to the doctor, before saying “I better go” and leaving. When he later received a message on the woman from Snapchat, indicating she had made a police complaint, he said he was “fuming, because she’s full of shit”.

The court heard in a pretrial hearing in February that police had approached the woman to ask if she would be willing to give evidence again, but she was “resistant” to return because she was “significantly affected” by the experience of testifying the first time.

In the first trial, the woman broke down in the witness box and began to cry, telling Hayne’s barrister that “no means f—ing no”. When she was asked to leave to take a break, she walked past Mr Hayne in court and said to him, “You’re a f—ing piece of shit.” This exchange was not played in the new trial.

The jury was also unaware that Mr Hayne had previously been accused of leaving a woman bleeding from her vagina after an alleged sexual assault in December 2015, while he was in the United States playing American football for the San Francisco 49ers.

That woman, known only by her initials JV, brought a civil case against Mr Hayne in 2017 because authorities did not have enough evidence to lay criminal charges. He settled with her for almost $100,000 in 2019.

On Monday, after the jury in the current case had been deliberating for about two and a half days, Judge Helen Syme said the issues of sexual assault and consent had been in the news over the weekend.

She urged jurors to disregard anything but the evidence they had heard in the case, and to avoid debating about consent law in general.