Joe Burrow and the Cincinnati Bengals walloped the Baltimore Ravens in a Week 7 win.

On Sunday, they picked up where they left off in a 41-21 victory over their division rivals to take control of the AFC North. The Bengals blitzed the Ravens for 31 first-half points as Burrow played on one of the best halves football in the NFL this season — or any for that matter.

By the time he was done, he'd torched the Ravens defense for 525 passing yards. He delivered a Michael-Jordan-esque shrug when he broke 500 yards with a 52-yard connection to running back Joe Mixon.

Burrow got a big assist from Tee Higgins, whose breakout since the season's midpoint continued in spectacular fashion. With the Bengals facing third-and-16 near midfield in the second quarter, Higgins took off on a go-route down the left sideline with two Ravens defenders in tow. No matter.

Burrow launched a missile armed with confidence in his second-year receiver's ability to get the ball. Draped by cornerback Kevon Seymour and safety Brandon Stephens, Higgins out-leapt both to corral the perfectly placed ball at the 3-yard line for a 52-yard gain.

Tee Higgins makes a spectacular catch with two defenders around him! #RuleTheJungle

Four plays later, Higgins hauled in a 1-yard touchdown pass from Burrow to pay off the big play. The touchdown gave the Bengals a 31-14 lead going into halftime and capped a stunning first half from Burrow and the Bengals offense. 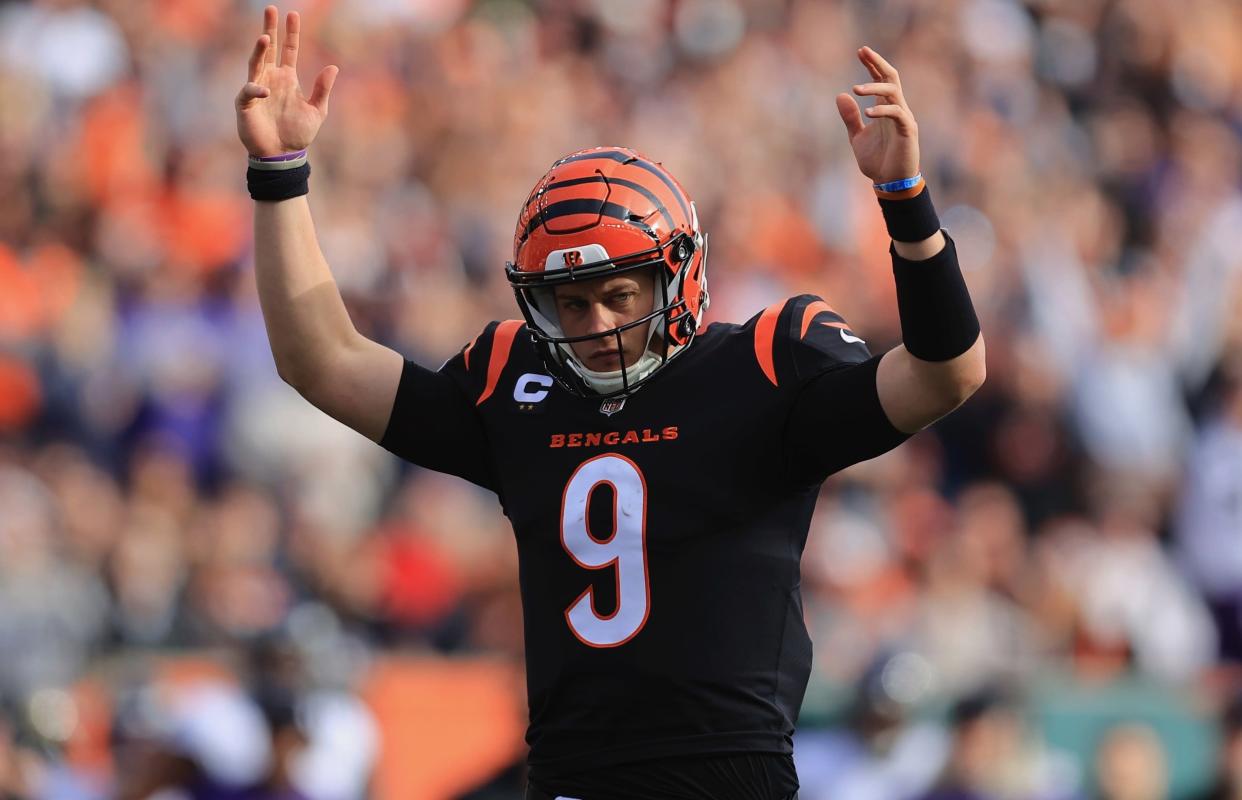 Burrow finished the half completing 18 of 21 passes for 299 yards with three touchdowns. His yardage total was the highest at halftime by any NFL quarterback in 2021. The advanced metrics were just as striking with his 26 first-half plays producing 21.9 expected points added.

Higgins finished the day with 12 catches for 194 yards and two touchdowns. The total marked his fourth 100-yard effort in five games after he produced zero in the first 11 weeks of the season. Rookie standout Ja'Marr Chase added seven catches for 125 yards as Burrow finished the day completing 37 of 46 pass for 525 yards with four touchdowns and no turnovers.

With the win, the Bengals improved to 9-6 to take control of the AFC North while dropping the Ravens to 8-7. With two weeks left in the season and the tiebreaker courtesy of their sweep of the Ravens, it adds up to a commanding lead in the division.