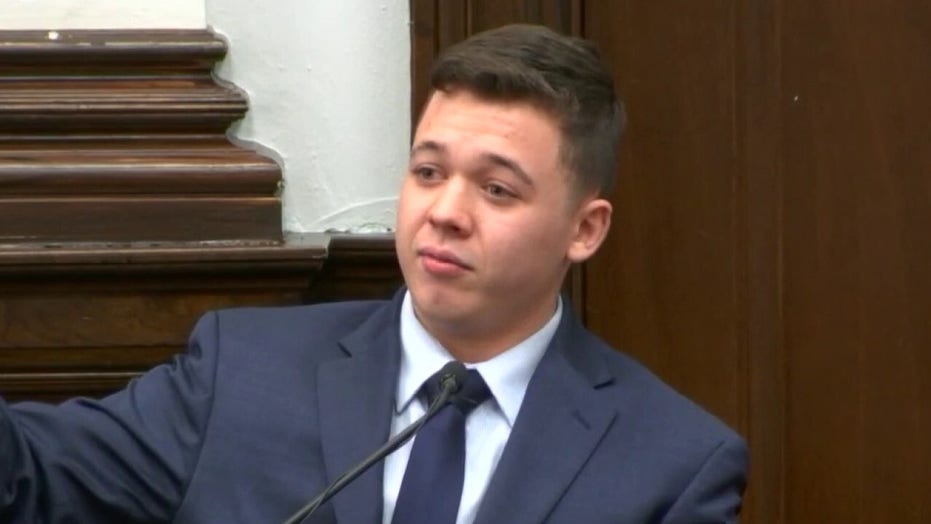 Kyle Rittenhouse takes the stand in his own defense

Fox News correspondent Mike Tobin reports on Kyle Rittenhouse testifying at his own trial and breaking down in tears while on the stand.

The trial of Kyle Rittenhouse, an Illinois man accused of fatally shooting two people and wounding a third during chaotic August 2020 demonstrations, is underway in Kenosha, Wisconsin. The demonstrations were sparked by the police shooting of Jacob Blake two days prior, while responding to a domestic disturbance.

Rittenhouse’s trial is expected to last at least two weeks. Here’s a look at the key players:

Rittenhouse, of Antioch, Illinois, was 17 at the time of the shootings. He served as a youth cadet in the Grayslake Police Department and posted photos of himself brandishing a rifle above the caption “Blue Lives Matter.” He worked part time as a YMCA lifeguard in Lindenhurst, Illinois, before he was furloughed in March 2020. Rittenhouse testified that he was an EMT cadet at the Antioch Fire Department until the incident on Aug. 25, 2020.

He traveled to Kenosha, which is only about 15 miles from his home, on Aug. 25, 2020 after pleas went out on social media to protect businesses during riots over the shooting of a Black man, Jacob Blake, by a White police officer two days earlier.

Video from the night of the shootings shows Rittenhouse on the streets with a medical kit and an AR-15-style semiautomatic rifle, the latter of which had been supplied to him by a friend and was later used in the shootings. He is charged with two counts of homicide, one count of attempted homicide, recklessly endangering safety and illegal possession of a dangerous weapon by a person under 18.

“People are getting injured and our job is to protect this business,” Rittenhouse told a reporter from the Daily Caller before the shootings. “And part of my job is to also help people. If there is somebody hurt, I’m running into harm’s way. That’s why I have my rifle.”

Rittenhouse’s attorneys say a man — Joseph Rosenbaum — chased the 5-foot-8, 150-pound Rittenhouse in an attempt to steal his gun, forcing Rittenhouse to fatally shoot him. Rittenhouse testified that Rosenbaum had threatened to kill him twice earlier in the night and was advancing toward him before the shooting. Video that has surfaced so far doesn’t show that shooting, but it does show Rosenbaum run toward Rittenhouse and appear to throw a plastic bag at him before shots ring out and Rosenbaum lies on the ground.

Rittenhouse is White, as are the three men he shot.

Prosecutors have painted Rittenhouse as the instigator, while defense has argued the teen was defending himself. 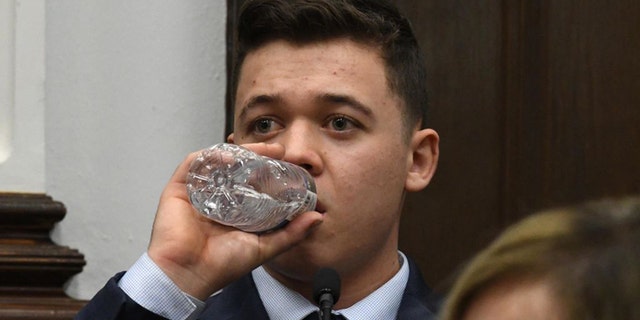 Kyle Rittenhouse takes a drink of water while testifying during his trial at the Kenosha County Courthouse on Nov. 10, 2021 in Kenosha, Wisconsin. (Photo by Mark Hertzberg-Pool/Getty Images)

As conservatives rallied to Rittenhouse as a symbol of gun rights and resistance to the violent rioting and lootings that followed George Floyd’s death in Minneapolis, he has seemed at times to revel in his notoriety. He posed for photos in a Wisconsin bar with members of the far-right extremist group the Proud Boys, though his attorneys say there’s no evidence he was affiliated with the group before the shootings.

Joseph Rosenbaum, 36, had been released the day of the shootings from a Milwaukee hospital where he had been treated for a suicide attempt. It’s not clear why he was on Kenosha’s streets the night of the protests, though he had a fiancée who lived in the city. His background includes a conviction for sexual conduct with a minor in Arizona in 2002.

Anthony Huber, 26, of nearby Silver Lake, is seen on video swinging a skateboard at Rittenhouse before he was shot. He was known around Kenosha’s skateboarding community, and his girlfriend, Hannah Gittings, said skateboarding was his life.

Huber served a pair of prison stints stemming from family conflict, including choking his brother in 2012.

A great-aunt, Susan Hughes, said Huber was involved in protests because he was “very upset” that a police officer had shot Blake, who was left paralyzed from the waist down. Despite some major media pundits promoting the false narrative that Blake was unarmed, prosecutors showed video evidence that Blake was holding a knife when he was shot and Blake himself admitted in a “Good Morning America” interview that he had a knife.

At the time of the shooting, Blake had several warrants out for his arrest for charges including disorderly conduct and third-degree sexual assault. Police tried to arrest him following a 911 call from the mother of his children on Aug. 23, 2020.

Gaige Grosskreutz, 27, of West Allis, about 30 miles northwest of Kenosha, has said he attended several protests following Floyd’s May 2020 death. With training as a paramedic, Grosskreutz had carried medical supplies and was doing so the night of the Kenosha shootings. He was also armed with a pistol and had it in his hand when he approached Rittenhouse, who shot him in the arm.

Kenosha County Circuit Judge Bruce Schroeder graduated from Marquette University Law School in Milwaukee in 1970 and has been on the bench since 1983. At 75, he’s the longest-serving active circuit judge in Wisconsin. He was appointed as a Kenosha County Circuit Court judge in 1983 by Democratic Gov. Anthony Earl. He was subsequently elected for a full term a year later and was most recently reelected last year.

He has run unopposed in the last three elections.

Schroeder scolded Kenosha County Assistant District Attorney Thomas Binger after he asked Rittenhouse whether he knew the use of deadly force can not be used to protect property. Schroeder accused Binger of trying to improperly introduce testimony that he said earlier he wasn’t inclined to include.

“I was astonished when you began your examination by commenting on the defendant’s post-arrest silence. That’s basic law. It’s been basic law in this country for 40 years, 50 years. I have no idea why you would do something like that,” Schroeder told Binger with the jury out of the courtroom. “You know very well that an attorney can’t go into these types of areas when the judge has already ruled without asking outside the presence of the jury to do so. So don’t give me that. That’s number one.”

Among his highest-profile cases was the 2008 homicide trial of Mark Jensen, who was accused of poisoning and smothering his wife. Jensen was convicted, but appellate courts and the state Supreme Court ruled that Schroeder had erred by admitting as evidence a letter Jensen’s wife had given to a neighbor before her death in which she said that if anything happened to her, her husband was responsible. A new trial is set next year.

Schroeder has the reputation of being a stern judge who often hands down tough sentences. In 2018, he sentenced a woman convicted of shoplifting to tell the manager of any store she entered that she was on supervision for theft. Schroeder told the woman that “embarrassment does have a valuable place in deterring criminality.” A state appeals court threw out the sentence.

Schroeder drew attention before Rittenhouse’s trial by forbidding attorneys from referring to Rosenbaum, Huber and Grosskreutz as victims — a longstanding practice in his courtroom. He also ruled that defense attorneys could portray the three as looters, arsonists or rioters if they could prove it. 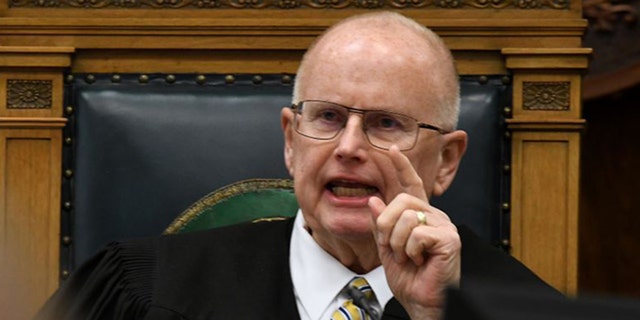 “He’s protective of the right to present a defense, the right to confrontation. He’s that way for all defendants, regardless of the case. The judge in my opinion is not swayed by or interested in politics,” Cicchini said. “He’ll apply the rules even-handedly without any influence from the media.”

Kenosha County Assistant District Attorney Thomas Binger, the lead prosecutor, got his law degree in 1996 from the University of Michigan. He served as a Milwaukee County prosecutor in the early 2000s and spent nine years in private practice before joining the Kenosha County district attorney’s office in 2014. He ran for district attorney in nearby Racine County as a Democrat in 2016, promising he would get tougher on heroin traffickers and help heroin users overcome their addiction to keep them out of the criminal justice system. But he lost to the Republican candidate.

Cicchini said he’s worked against Binger on several cases. He called the prosecutor “skilled” and “a hard worker.”

During cross-examination, Binger lightly scolded Rittenhouse for looking at his attorney too much.

Mark Richards, the defense attorney, argues that he is sitting behind Binger and therefore his client could be looking at Binger, not at him.

Racine attorney Mark Richards is leading Rittenhouse’s defense. He’s a courtroom veteran, earning his law degree from the University of Wisconsin-Madison in 1987. He served as an assistant district attorney in Racine and Kenosha counties in the late 1980s before he opened his own firm in 1990 that specializes in criminal defense. 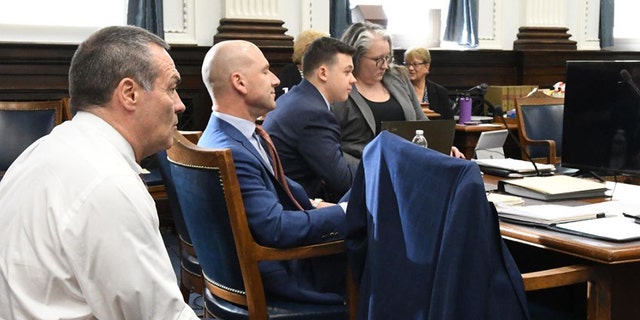 Richards has worked on more than 100 jury trials. He forced Racine prosecutors in 1999 to drop first-degree intentional homicide charges against Kurtis King, who was accused of strangling his cellmate at the Racine Correctional Institution, after raising questions about the guards’ credibility.

Richards made a motion for a mistrial with prejudice, citing a prosecutor’s line of questioning with Rittenhouse, who took the stand earlier Wednesday. If granted, the state would not be allowed to re-file charges against Rittenhouse.

Fox News’ Stephanie Pagones and Jiovanni Lieggi, as well as The Associated Press contributed to this report.