Palaeontologists have uncovered the largest dinosaur found in Australia, a long-necked colossus that gives other huge dinosaurs from around the world a run in the heavyweight stakes.

The giant sauropod, now officially named Australotitan cooperensis in a new scientific paper, grew up to 30 metres long and up to six metres high at the hip, making it as long as a basketball court and two storeys tall. 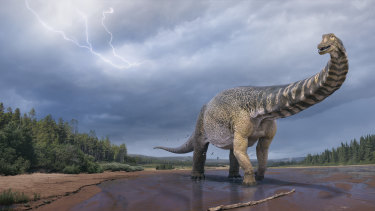 “The exciting thing for us is we can put our first hat in the ring for the world’s largest dinosaurs. It’s not the largest in the world, but it’s certainly top 10,” Dr Hocknull said.

Determining the weight of the species was difficult and methods differed, however Dr Hocknull said they were confident of a weight range between 50 tonnes and 70 tonnes, which would easily put it among the heaviest sauropods.

“What’s interesting is it’s very different from the three other sauropod species which have been found around [Queensland town] Winton in the north,” he said.

“It’s much bigger, it’s got wider hips, and it seems to be by itself. There are no other sauropod species in its area and timescale in the same way there are around Winton.”

Australotitan lived in the late Cretaceous period between 92 million and 96 million years ago, when Australia was still part of mega-continent Gondwana, and the region around central Australia was an inland sea.

The dinosaur was named Australotitan to reflect its huge size, with the name meaning “southern titan”. The second part of its name, cooperensis, refers to Cooper Creek, the area near the town of Eromanga in western Queensland where the fossils were discovered in 2007.

In the nearly 14 years since, researchers from both the Queensland Museum and the Eromanga Natural History Museum have partnered with specialists to study the fossils, reconstruct the skeleton and compare the bones to others found in Australia and elsewhere. 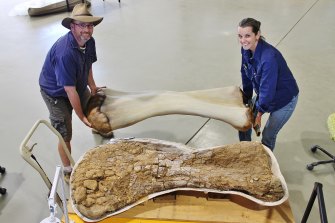 Dr Scott Hocknull and Robyn Mackenzie with one of the fossils, a humerus, and a 3D reconstruction.Credit:Rochelle Lawrence

Dr Hocknull said they used state-of the art 3D modelling techniques to compare the bones, which due to their size and the fossilisation process turning them to stone meant they each weighed several hundred kilograms.

“We digitally scan the bones so that I can carry around thousands of kilos of dinosaur bones in my seven-kilo laptop,” he said.

“Using 3D scanning has revolutionised our field because once this research paper is out, researchers from across the globe can access those 3D models and compare all dinosaurs against one another.”

The fossils were discovered by a joint team from both the Queensland Museum and local palaeontologists who went on to form the Eromanga Natural History Museum.

“Everyone was learning as we went because no one had dug up bones that big before,” Ms Mackenzie said.

“It’s taken a while for us to get the word out about these discoveries, but they really are second to none. We have really rich fossil fields here which are only just starting to be explored.”

The museum has built a special wing specifically to house a life-size reconstruction of Australotitan, as well as displaying the fossils themselves behind glass. 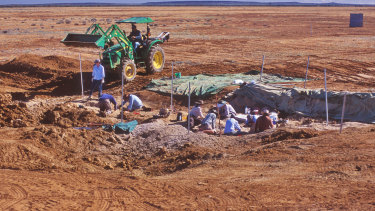 The team used earth movers to get at the enormous bones at the site at Cooper Creek, after which the main specimen, “Cooper”, was named.Credit:Eromanga Natural History Museum

Work to dig up even more bones has been ongoing since the first Australotitan specimen was discovered.

Dr Hocknull said there was every reason to believe more large dinosaurs were still out there, waiting to be uncovered.

“In other parts of the world where we’ve found these really huge plant-eating dinosaurs, we’ve also found huge theropod dinosaurs which preyed on them,” he said.

“We’ve found a couple of small theropod dinosaurs in Australia — Australovenator from the Winton area is one, it was about five to six metres long. But it wouldn’t have bothered Australotitan, which suggests there is a very large predatory dinosaur out there somewhere.

“We just haven’t found it yet.”

The research is published in the journal PeerJ.