You wouldn’t want to pay the electricity bill! London lights up for Christmas as photographer uses helicopter to capture city’s stunning display

The countdown to Christmas has now begun – with today marking the first day of the festive season.

Now that December is upon us, many families across the UK have set out to find decorations to deck the halls and spruce up their trees.

Although the nights are now getting darker and some local light switch-ons have been cancelled amid the energy crisis, London has never looked brighter.

Dazzling light displays can be seen all over the city as thousands flock the capital for present-shopping, Winter Wonderland and to see the famous tree in Trafalgar Square.

And thanks to a New York photographer, these illuminations can now be seen from a birds-eye view having been snapped from the cockpit of a helicopter. 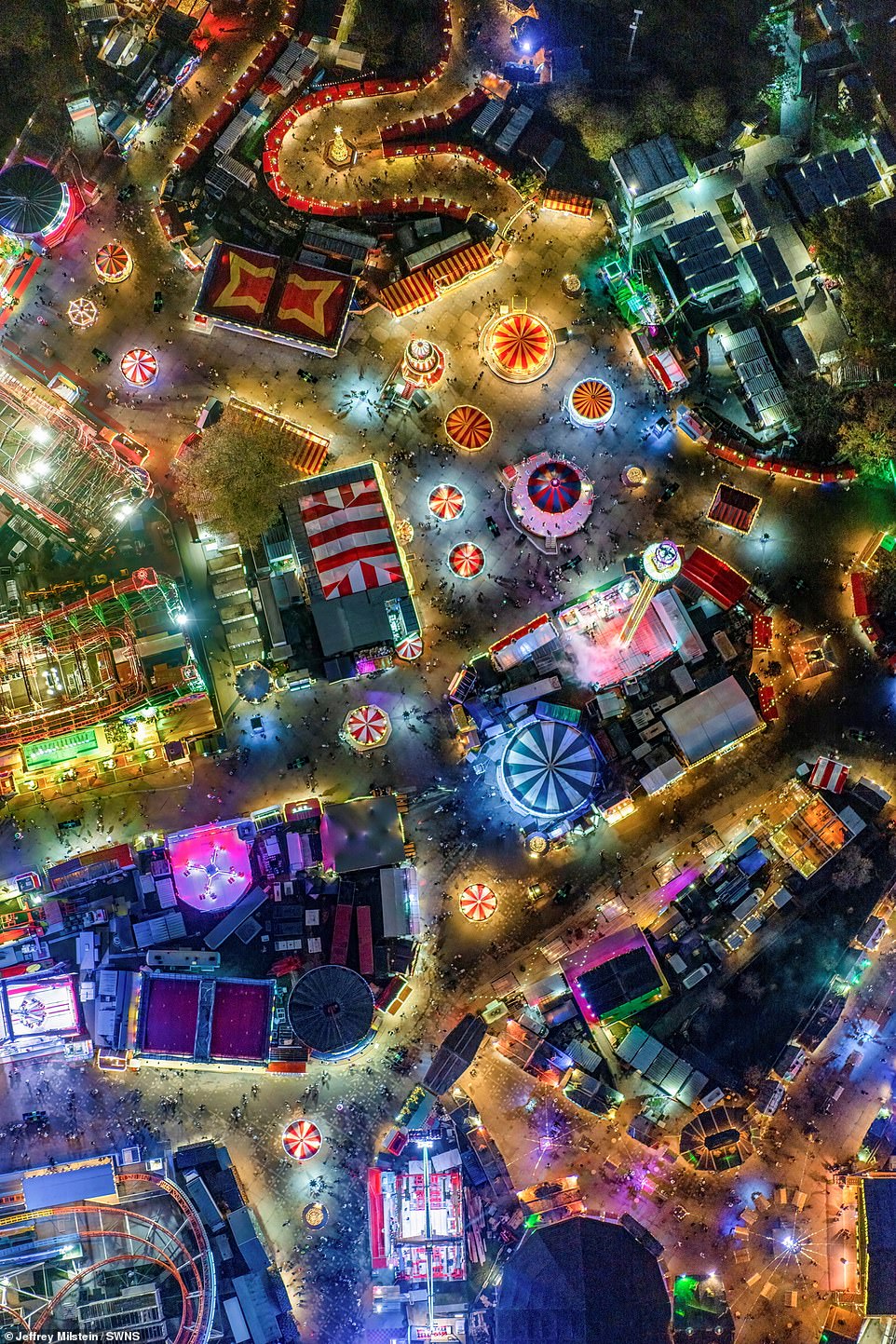 Jeffrey Milstein’s glowing photographs of London capture the exciting events it has to offer this Christmas.

Winter Wonderland has being wowing visitors for 15 years with fair ground rides, performances and plenty of treats.

But the seasonal event has faced some criticism this year due to claims that food prices are too expensive.

The London Eye will also be hosting a range of  festive activities, and is lighting up in different themes for the 12 days of Christmas.

The famous tree of Trafalgar Square is set to be switched on later today – annually gifted to the people of Britain as a thanks from Norway for support in World War Two. 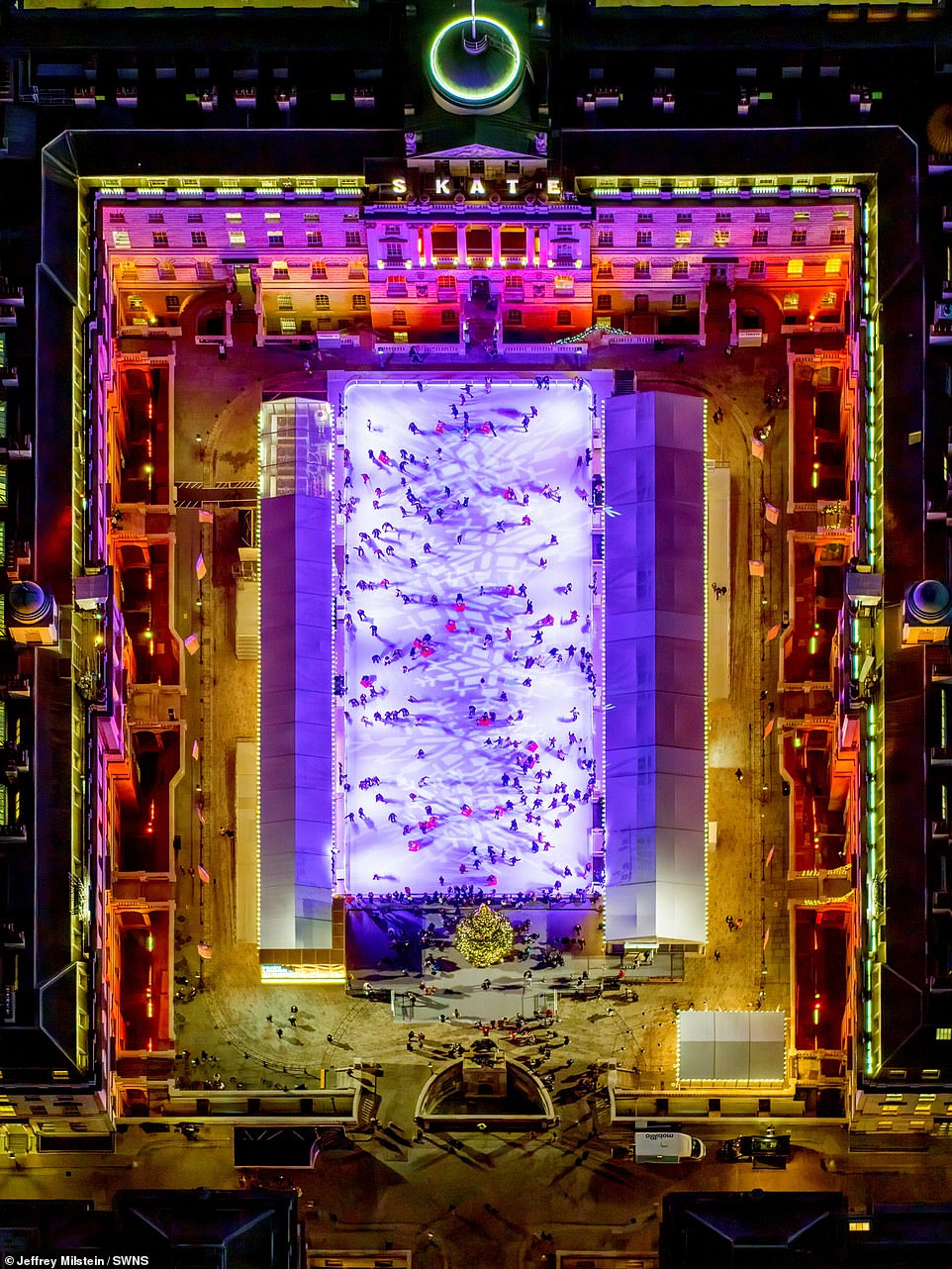 A Blue Christmas: Crowds of ice-skaters gather at the Strand’s majestic Somerset House 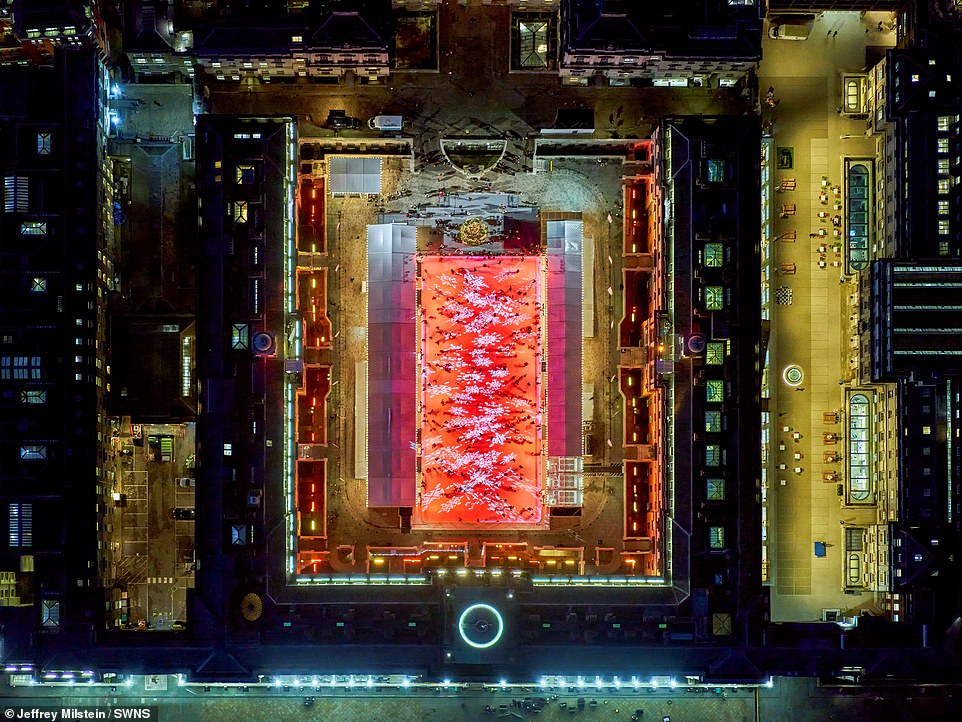 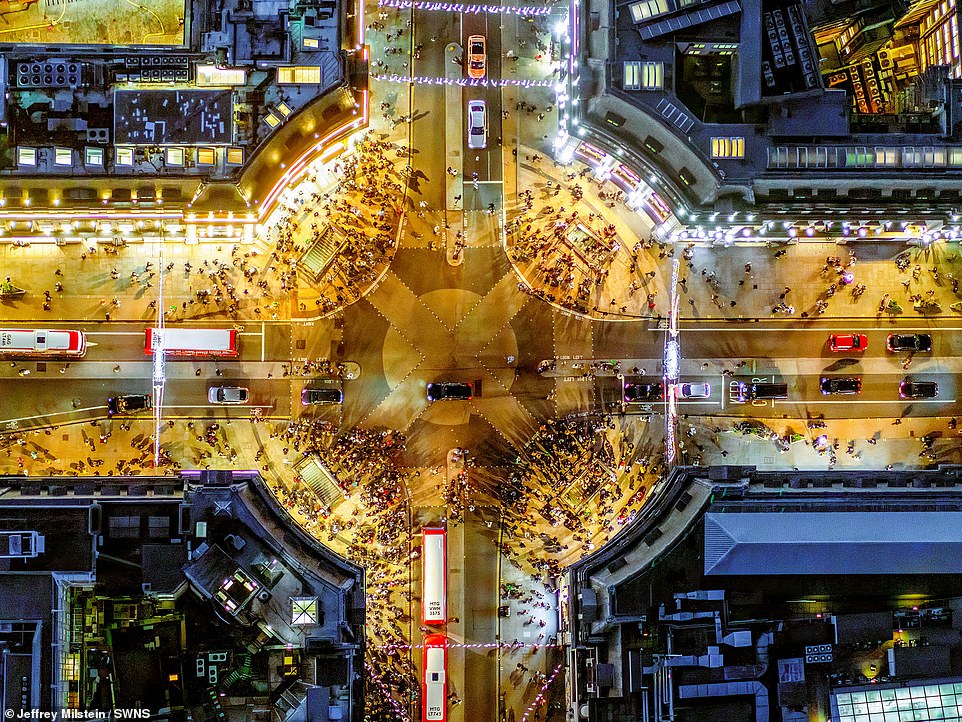 What a spectacle! London’s iconic Oxford Circus gleams in the night sky as hundreds as many shoppers flock the streets 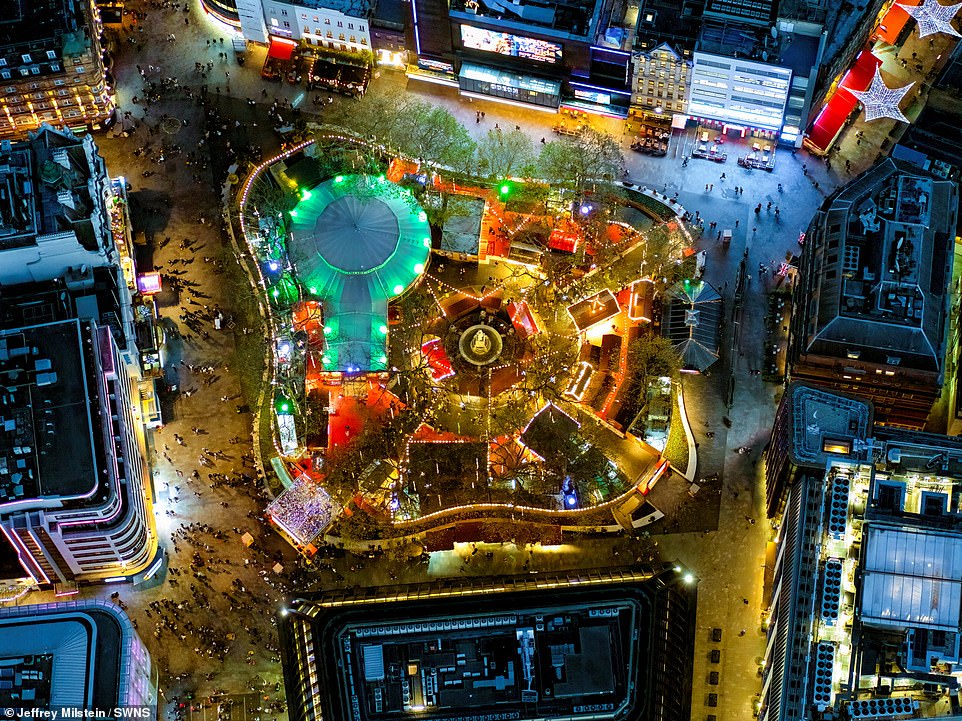 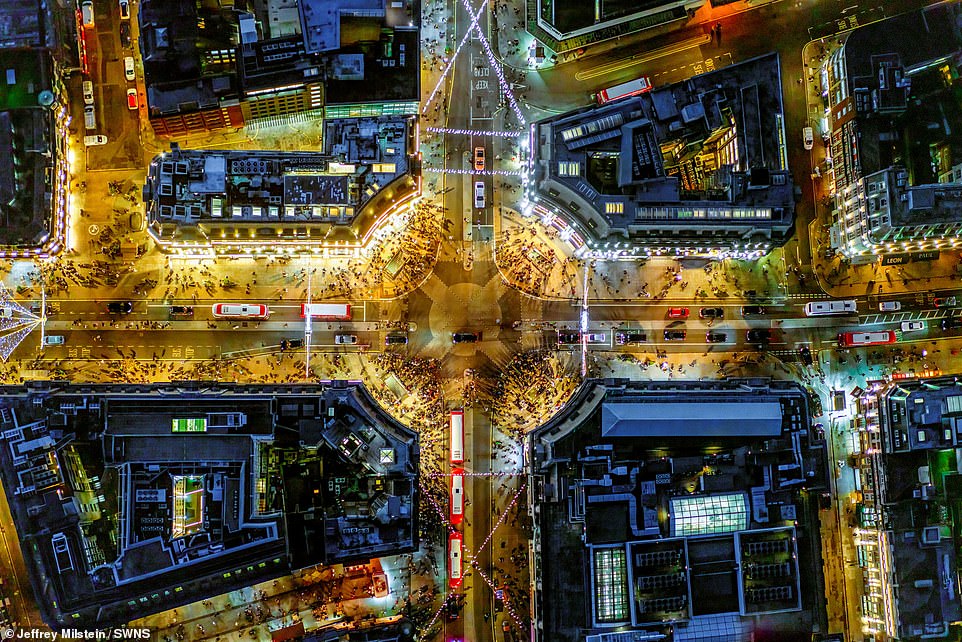 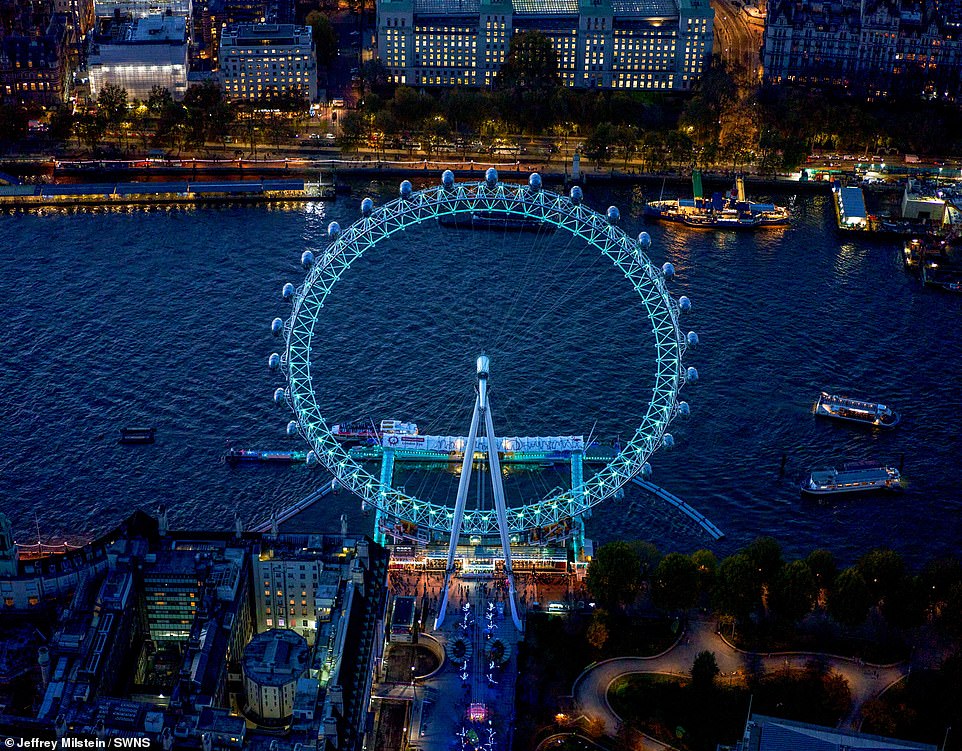 The busy streets are a reminder of how different Christmas was for people in the UK last year, given to self-isolation rules that were in place during Christmas of 2021.

Last year it was also reported that nearly 900,000 people may have been forced to spend Christmas Day in self-isolation after catching Covid in the previous 10 days. 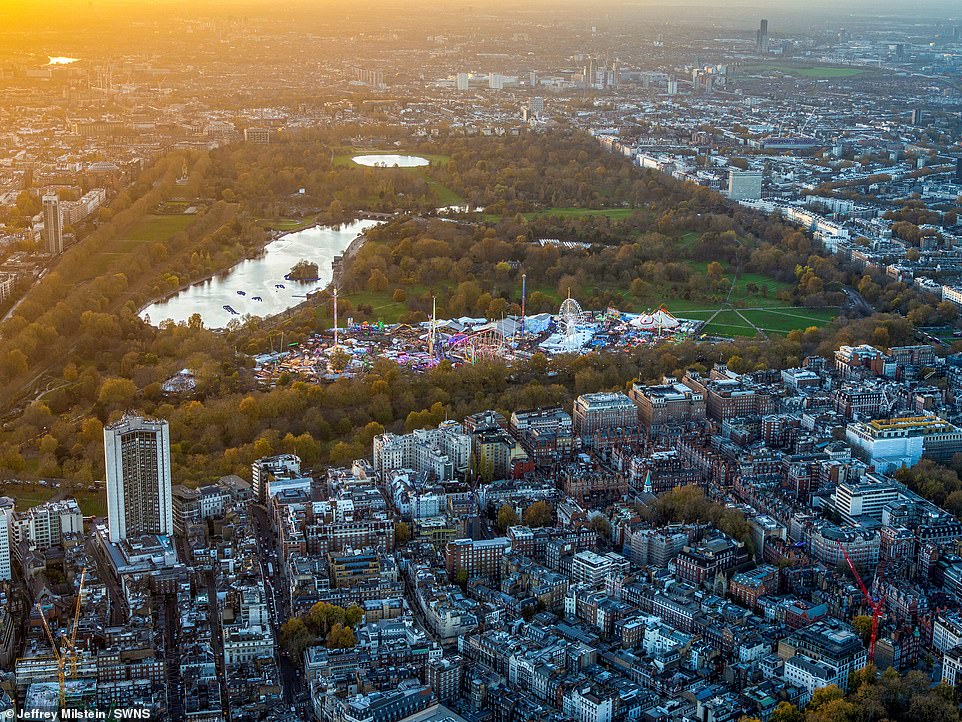 Before the lights: Winter Wonderland can be spotted amid the cluster of trees at Hyde Park 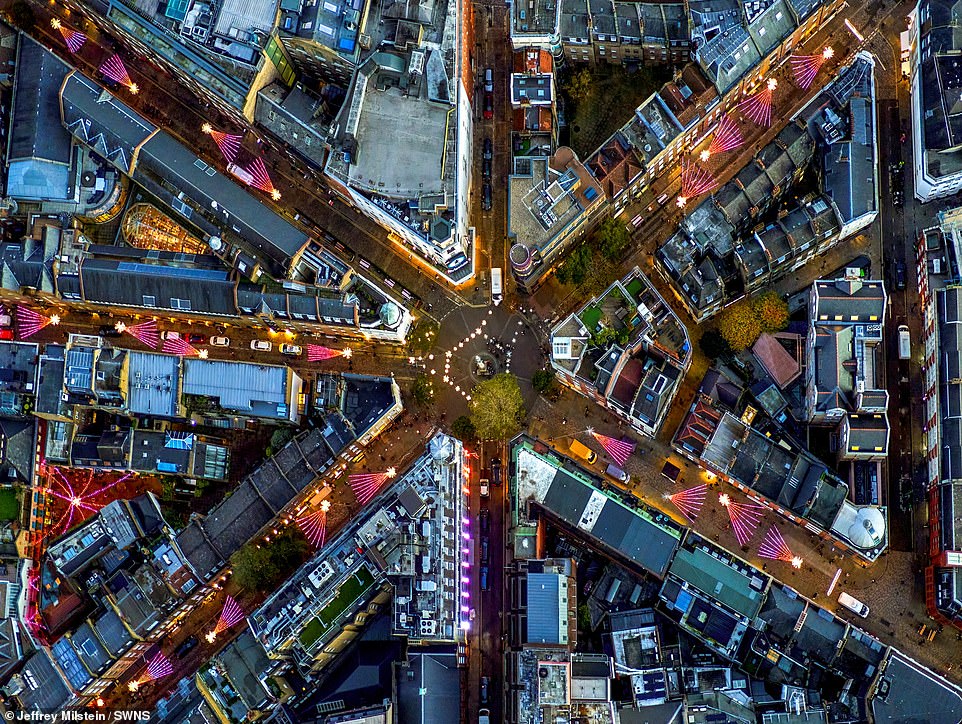 In the borough of Camden, the Seven Dials glows a festive red as people are dotted about the street 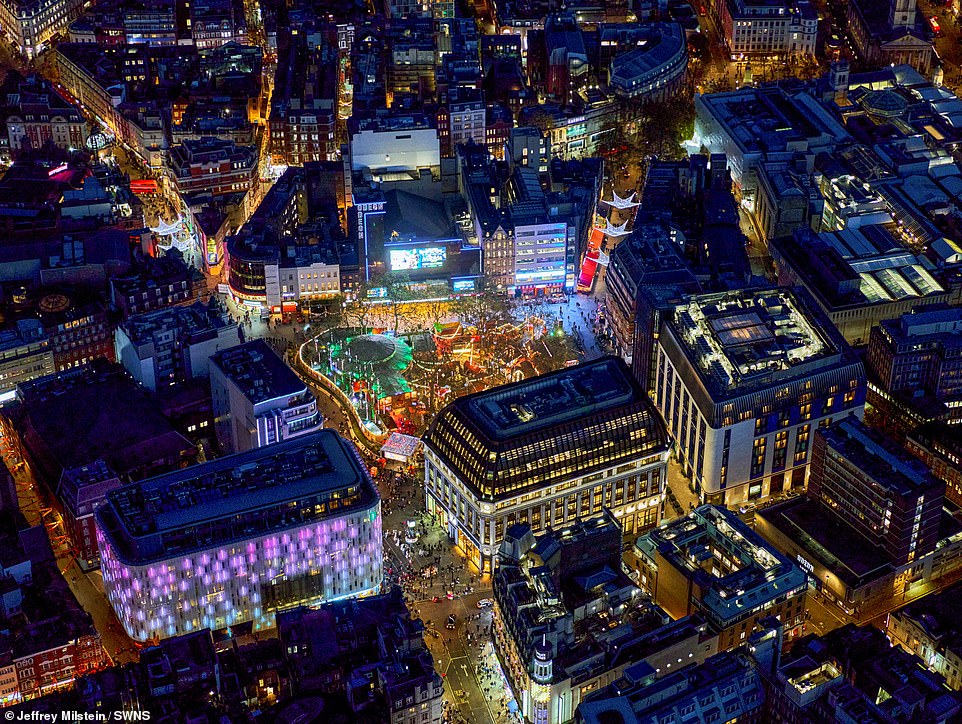 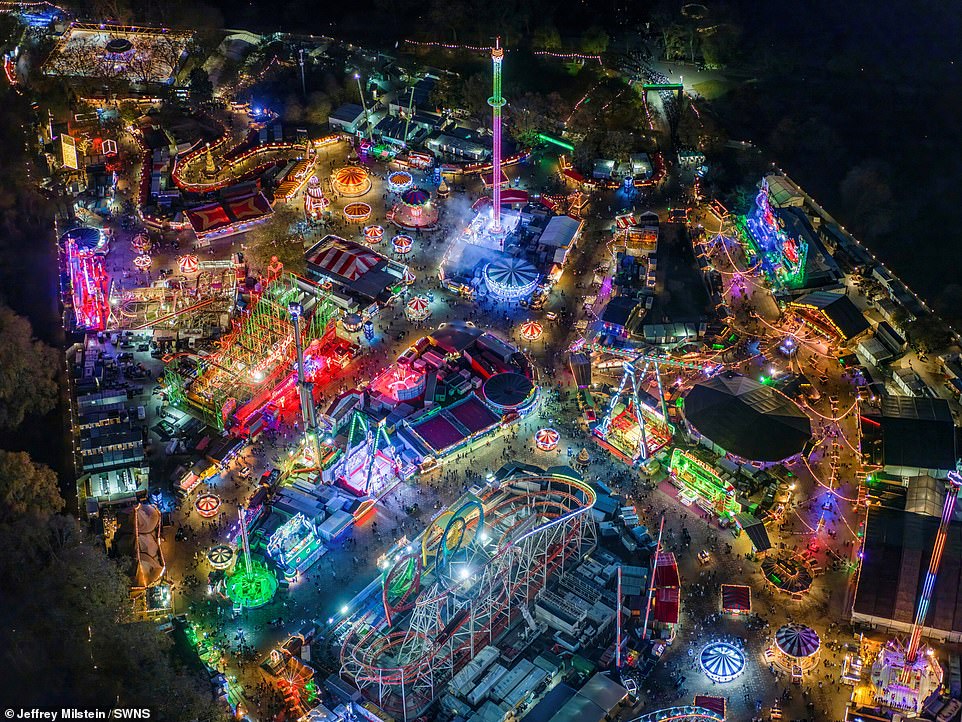 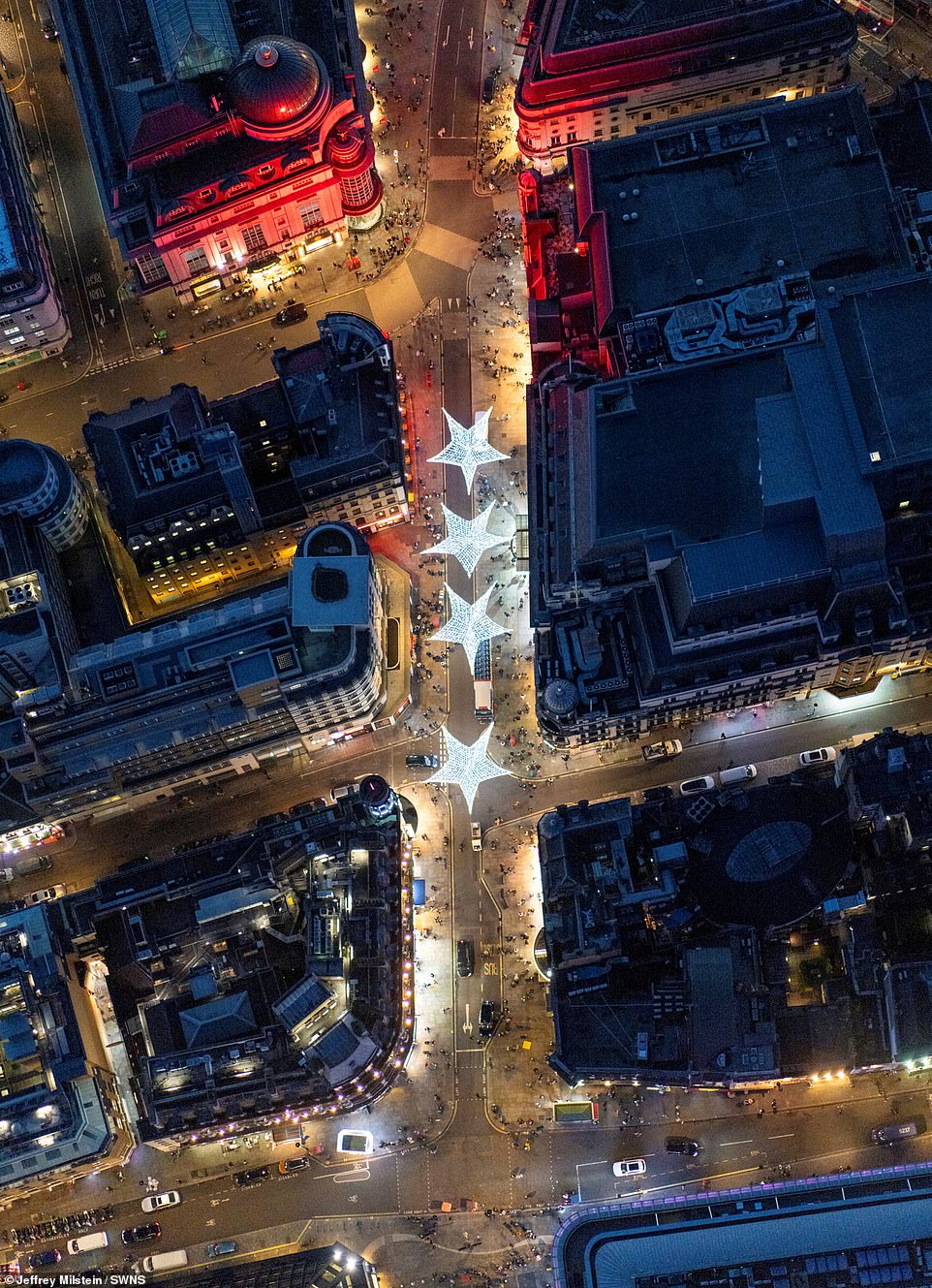 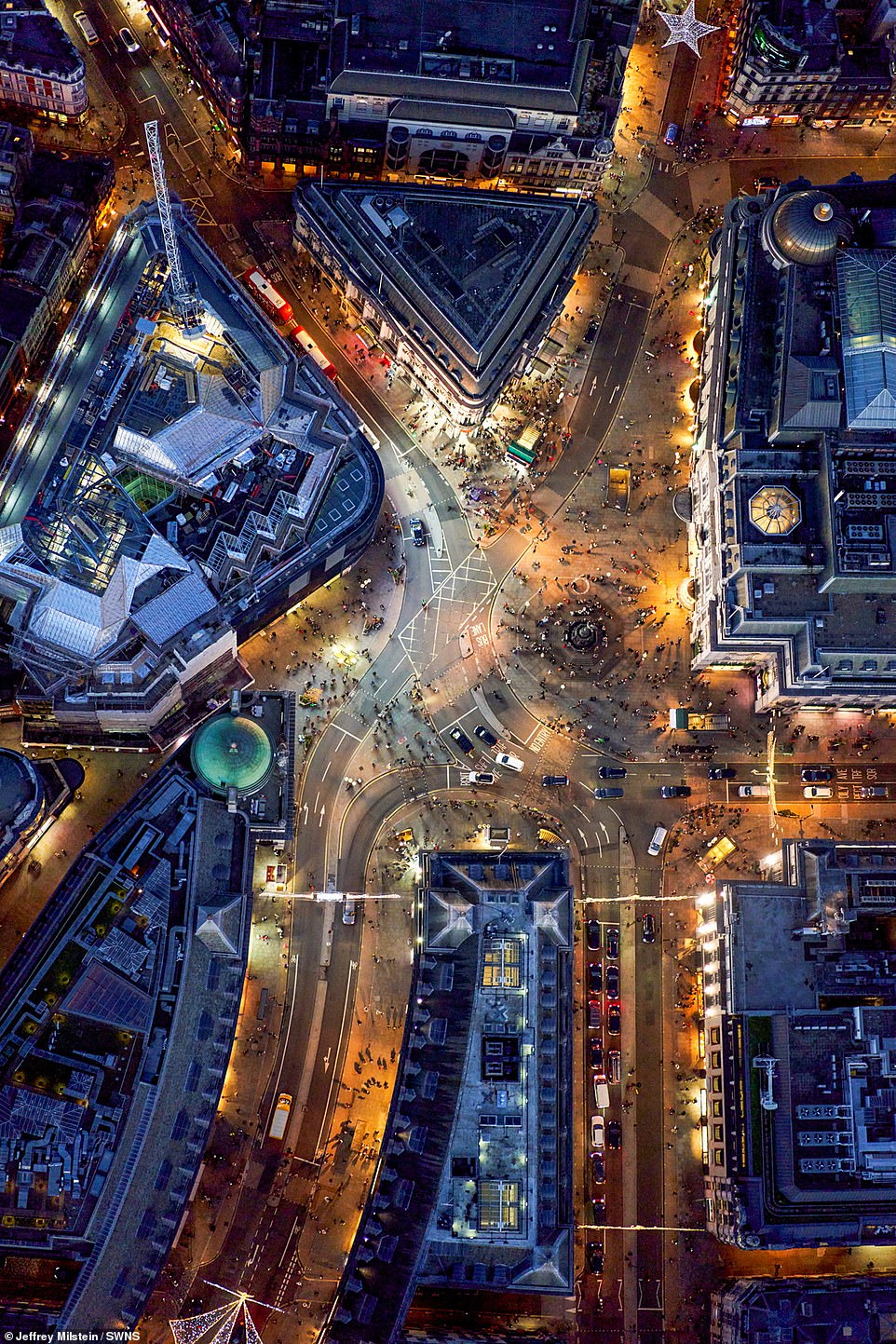 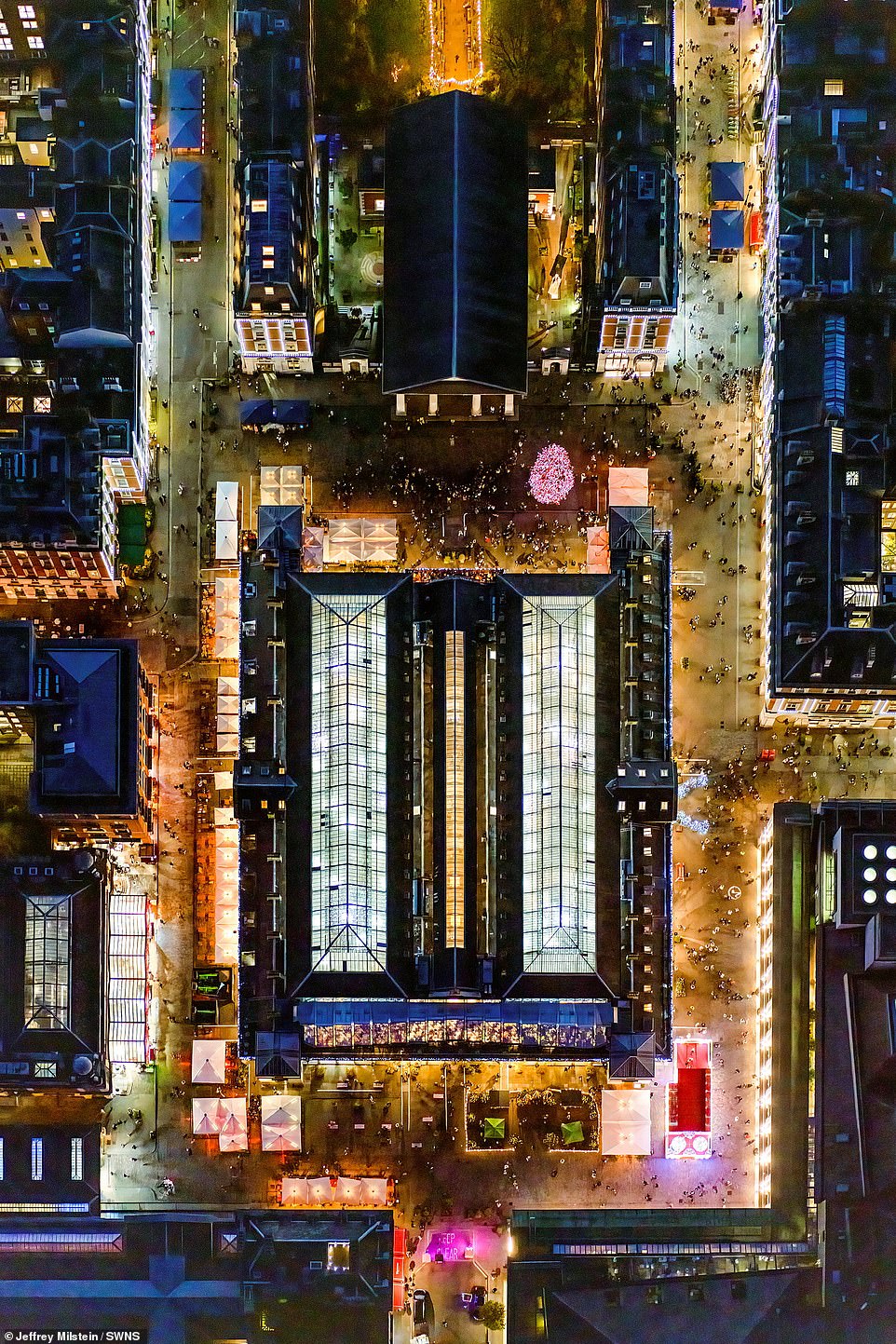 Home to luxury fashion shops and a number of restaurants, Covent Garden gleams brightly in the dark 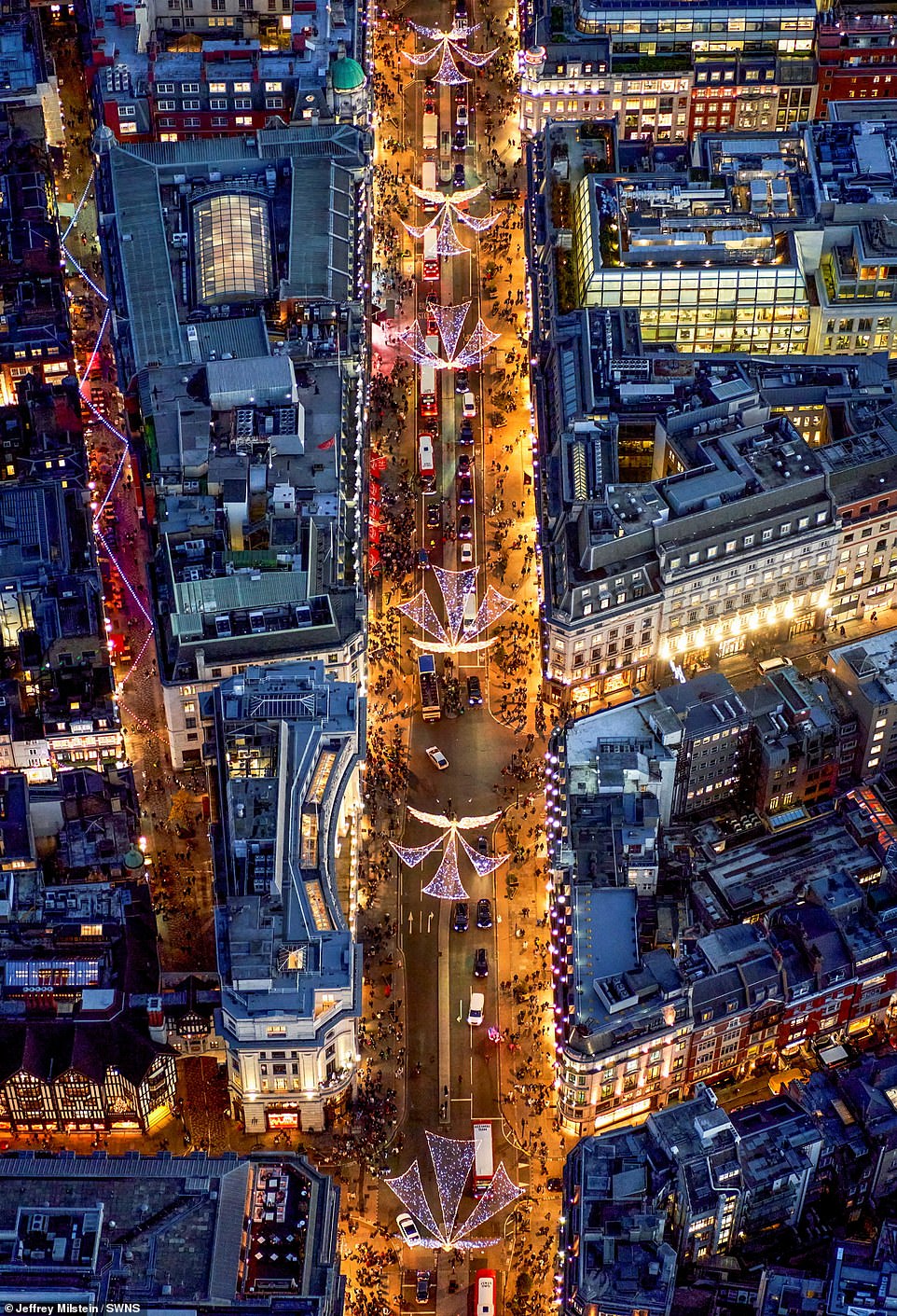 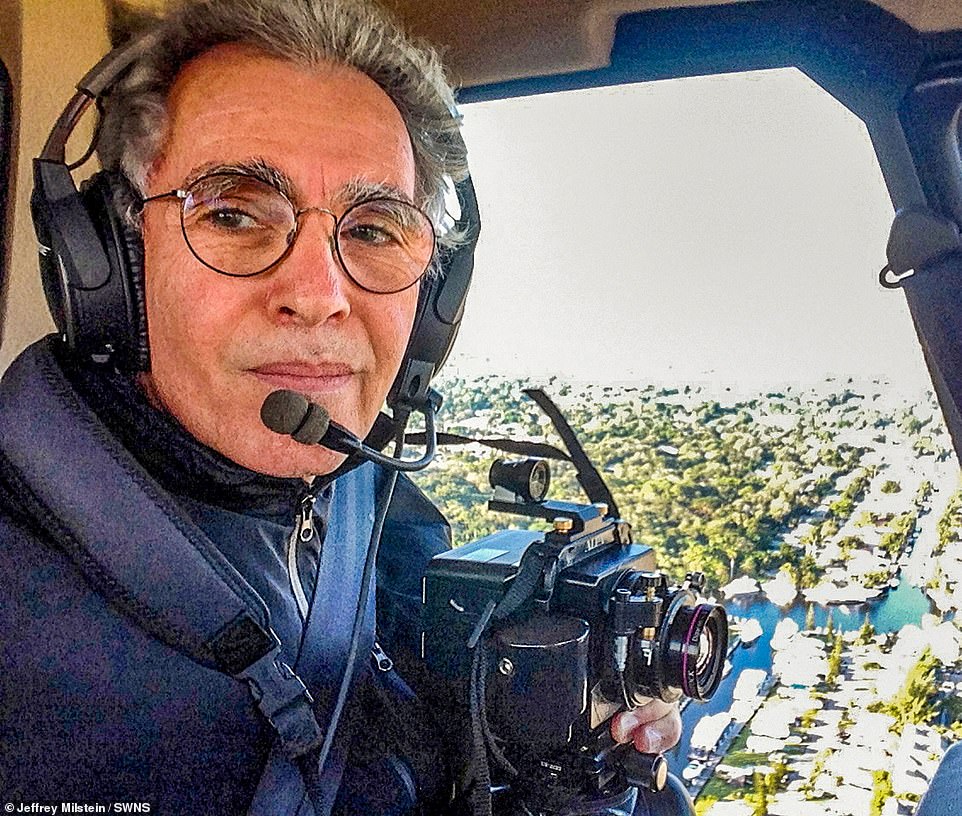 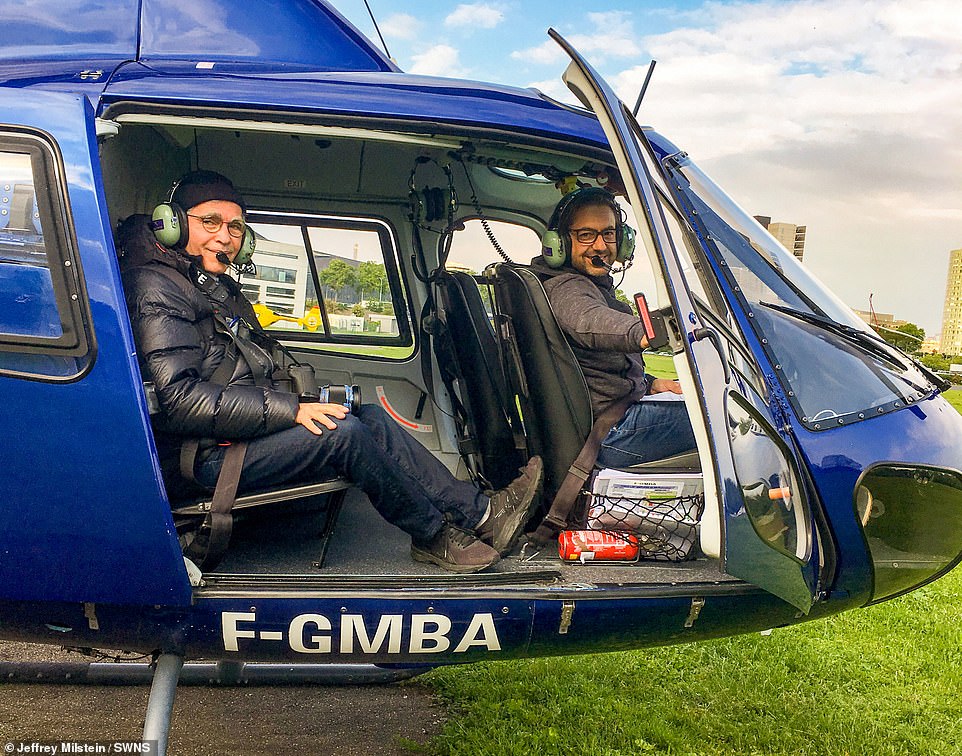