A man was helped out of his apartment by firefighters early on Saturday morning after his unit caught fire near Bondi Beach, leading to the evacuation of about 40 people from the unit block and an adjoining complex.

The cause of the fire on the fourth floor of a block of flats on Ramsgate Avenue is currently unknown, Fire and Rescue Superintendent Brendan Hurley said. 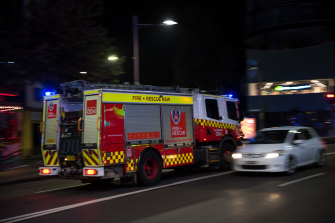 Emergency services were called to Bondi Beach about 12.40am on Saturday morning.Credit:Isabella Porras

Six people were treated for smoke inhalation by ambulance paramedics as more than 35 firefighters and eight fire trucks from across Sydney worked to extinguish the blaze around 12.40am.

Residents were evacuated as a precaution and emergency accommodation was organised. Smoke damage to other units from the top floor apartment fire was evident, Superintendent Hurley said.

No one was seriously injured and a crime scene was established by police officers from the Eastern Suburbs Command who are investigating the cause of the fire, however it is not believed to be suspicious.

Superintendent Hurley said it was a timely reminder for people to be aware of the dangers in winter that can result from leaving clothing and other items too close to heaters.

At the end of each day, we’ll send you the most important breaking news headlines, evening entertainment ideas and a long read to enjoy.  Sign up to The Sydney Morning Herald‘s newsletter here, The Age‘s here, Brisbane Times’ here, and WAtoday’s here.