The former Monty Python comic said he was ‘delighted by the success of the appeal’ after 90,000 food boxes were packed.

They have been dispatched in a stream of more than 30 lorries at our hub in Leicestershire to eastern Ukraine. 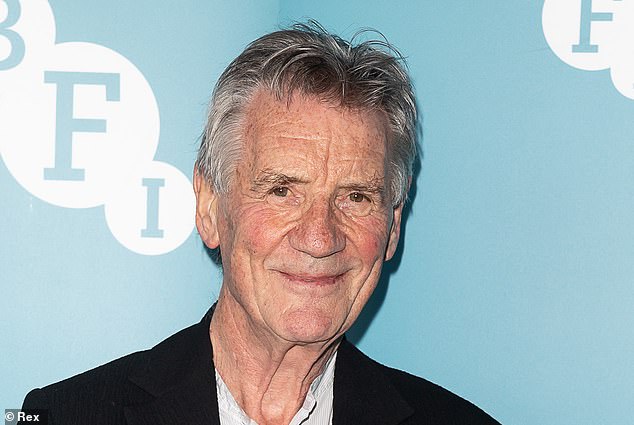 The former Monty Python comic said he was ‘delighted by the success of the appeal’ after 90,000 food boxes were packed

Sir Michael, a travel writer and presenter who has a special place in his heart for the besieged country, has urged people to donate to Mail Force, which has so far raised £11million.

He visited Kyiv in 1992, when it was still in the Soviet Union, for his Pole To Pole travel series and again in 2007 for New Europe.

Last month on the BBC Sunday Morning show he had an emotional reunion on video call with Ukrainian nationalist Vadym Kastelli, who appeared in both programmes.

Sir Michael was joined by Julian Fellowes, with the Downton Abbey writer heaping praise on the campaign.

Lord Fellowes said: ‘This is a terrific initiative, and a reminder that we must do whatever we can to help. A free and peaceful country is under savage attack. It seems incredible for this new century, but it’s happened and we are all involved.’

The Mail Force charity is paying £4million towards 500,000 food boxes in a joint mission with the Ukrainian embassy in London and the Confederation of British Industry.

Each box contains 14 items including pasta, porridge, tinned meat, fish and vegetables, and contains enough calories to feed an adult for a week. They are being packed at a rate of 400 an hour at a plant run by Oakland International in Leicestershire.

Millions of Ukrainian families have been forced to flee their homes under bombardment from the Kremlin’s rockets and bombs. Many have crossed into western Europe, where they are being helped by aid organisations such as Unicef and CARE International, which are receiving funds from Mail Force.

But the biggest worry is for those too frail to leave or who have resolved to stay and help. Vladimir Putin’s ruthless military forces are waging a cruel battle to starve cities into submission. Hundreds of thousands of elderly and disabled people struggling to find food supplies are in desperate need of help. The Ukrainian embassy in London is helping to coordinate the efforts to get the food boxes into Ukraine and to the towns where they are most needed.

The Mail Force appeal launched just days after Moscow’s invasion of Ukraine, and was kickstarted with a £500,000 donation from DMGT, the Mail’s parent company, at the personal request of Lord and Lady Rothermere. Since then, readers have sent in money in droves.

Readers of Mail Newspapers and MailOnline have always shown immense generosity at times of crisis.

Calling upon that human spirit, we are now launching an appeal to raise money for refugees from Ukraine.

For, surely, no one can fail to be moved by the heartbreaking images and stories of families – mostly women, children, the infirm and elderly – fleeing from Russia’s invading armed forces.

As this tally of misery increases over the coming days and months, these innocent victims of a tyrant will require accommodation, schools and medical support.

All donations to the Mail Ukraine Appeal will be distributed to charities and aid organisations providing such essential services.

In the name of charity and compassion, we urge all our readers to give swiftly and generously.

TO MAKE A DONATION ONLINE

To add Gift Aid to a donation – even one already made – complete an online form found here: mymail.co.uk/ukraine

Via bank transfer, please use these details:

TO MAKE A DONATION VIA CHEQUE

TO MAKE A DONATION FROM THE US

You can donate via CAF America at: https://donations.cafamerica.org/mail-force/

US readers can donate to the appeal via a bank transfer to Associated Newspapers or by sending checks to dailymail.com HQ at 51 Astor Place (9th floor), New York, NY 10003.

Checks in the US need to be made out to ‘CAF America’ and have ‘Mail Force Ukraine Appeal’ in the memo.