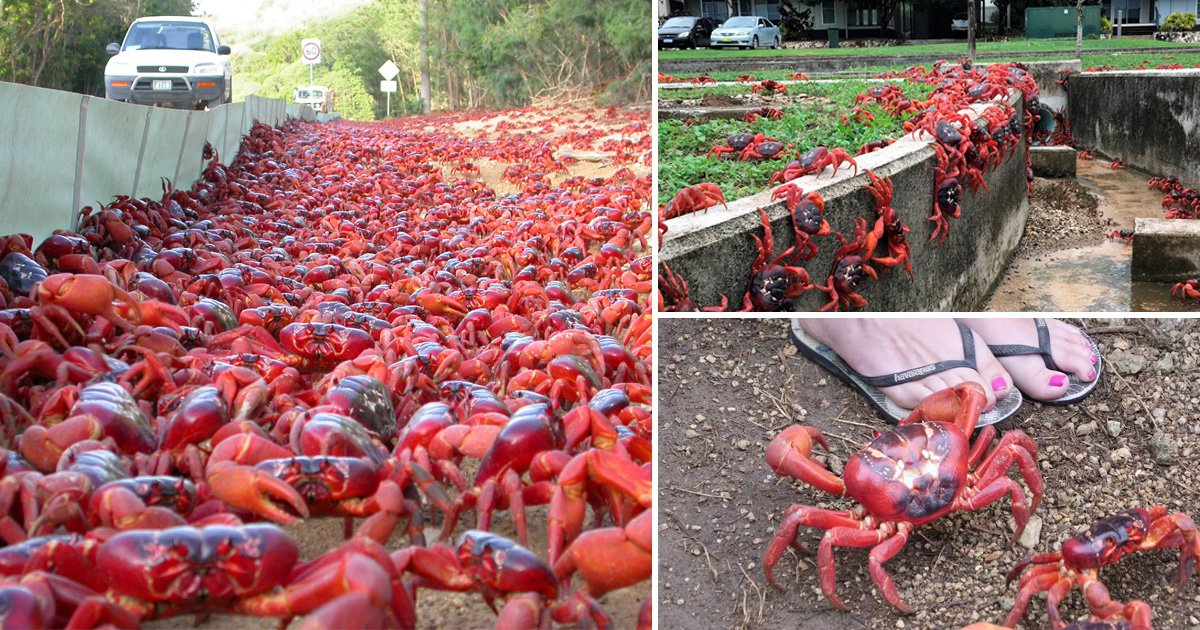 Millions of ‘robber crabs’ have begun an annual migration that turns streets red in Australia.

Roads on Christmas Island were closed as countless crustaceans emerged from the forest to begin their journey to the ocean.

They negotiated rain-soaked streets, crawled across forest floors and entertained locals during the journey.

The phenomenon on the island off the coast of Western Australia starts around the first rainfall of the season – which is usually in October or November but can be as late as January – but is also tied to the lunar calendar.

It prompts huge red crabs all over the island to leave their homes and march towards the ocean to mate and spawn in a remarkable event which brings parts of the region to a standstill.

Various others roads and areas have also been closed to protect the animals on their way to the Indian Ocean in what is considered one of nature’s most colourful and striking migrations.

According to Parks Australia, the male crabs will journey back to the jungle after mating, while the females stay behind in the burrows for about two weeks to lay eggs. Each female crab can produce up to 100,000 eggs, which she holds in a brood pouch.

‘But until moving here in 2021, I’d never seen it for myself. As the time approaches, the entire island community prepares in anticipation and speculates about when it will start.’

Every year, the island’s community spends months preparing for the epic movement, putting up temporary barriers along roadsides to funnel crabs toward specially constructed crab bridges.

Simon added: ‘Locals carry rakes and brooms in their vehicles to sweep the crabs to the roadside so they can drive past.

‘After the migration began at the end of October, the crabs are now making their way toward the ocean, where they’ll breed.

‘The females will then shake their eggs into the ocean, where they’ll hatch. Weeks later the tiny baby crabs will return to shore.’

Beaches on the island, which is close to Indonesia, are flooded with crabs when they arrive, making them look like a dramatic lava flow.

‘Together, with the ongoing support of the Australian Federal Police, Shire of Christmas Island and the community, these efforts help protect the island’s keystone species.

‘World-renowned naturalist Sir David Attenborough described the red crab migration as “like a great scarlet curtain moving down the cliffs and rocks towards the sea” and considered filming the spectacle as one of his 10 greatest TV moments.

‘Over the years visitors have travelled from every corner of the world to witness this wildlife phenomenon.’

Red crabs – also known as robber or coconut crabs – always spawn before dawn on a receding high-tide during the last quarter of the moon.

Baby red crabs may return to the shore about one month later to make their journey back into the tropical forest of Christmas Island.

Get in touch with our news team by emailing us at webnews@metro.co.uk.