Could YOU be in negative equity? Online mortgage calculator reveals whether you face paying more for your home than it is worth

An online calculator shows if you face being caught in an expensive mortgage ‘trap’ with a huge hike in repayments if the value of your property drops – as millions of households are set to see rates soar.

As The Bank of England warned this week of Britons facing ‘significant pressure’ with interest rates rising and banks reining in lending, a tool developed by a money-saving firm can indicate if you could be hit by an increase in repayments.

Nous.co, an app which helps users manage their outgoings, has launched the tool which allows people to enter basic financial details, such as their home’s value and current mortgage, to assess their potential risk.

It comes as pay is falling at the fastest rate in 13 years as the cost-of-living crisis bites – with older people forced back into the jobs market. Chancellor Jeremy Hunt warned that demanding huge pay rises will only ‘prolong the pain for everyone’ by embedding inflation – all while food and energy remained painfully high in the run up to Christmas.

Office for National Statistics data today revealed that food and non-alcoholic drink inflation hit a high of more than 45 years last month while electricity is now 65.4 per cent more expensive than a year earlier and gas prices have rocketed up by 128.9 per cent.

To use the calculator, simply click ‘get started’, fill in the required information about your mortgage then hit ‘calculate’ – and let the tool do the work. 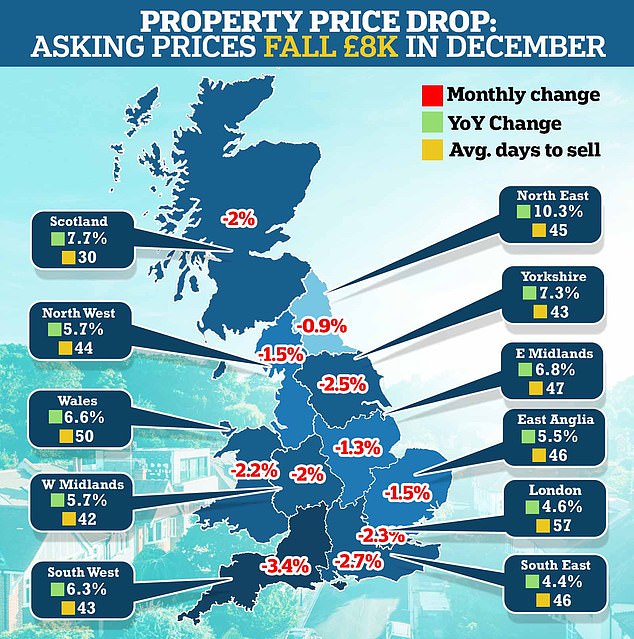 Nous.co provided an example of somebody on an average home loan of £270,000 who got a 90 per cent mortgage on a two-year fixed rate of 3 per cent in 2021 and said they could face a monthly rise of £499 if they are unable to re-fix their deal because their home is worth less than they paid for it and they are forced to stay with their same provider on a standard variable rate.

Greg Marsh, founder and CEO of Nous.co, explained: ‘If you bought a home with a high loan-to-value mortgage of, say, 90 per cent in 2020 you would almost certainly have chosen a very attractive fixed rate deal at around 2.5 to 3 per cent.

‘But if that deal ends next year, it is likely that the value of your home will have fallen by as much as 15 per cent. You won’t be able to shop around for another fixed deal or even get one with your current provider because you no longer have that 10 per cent equity in your home. 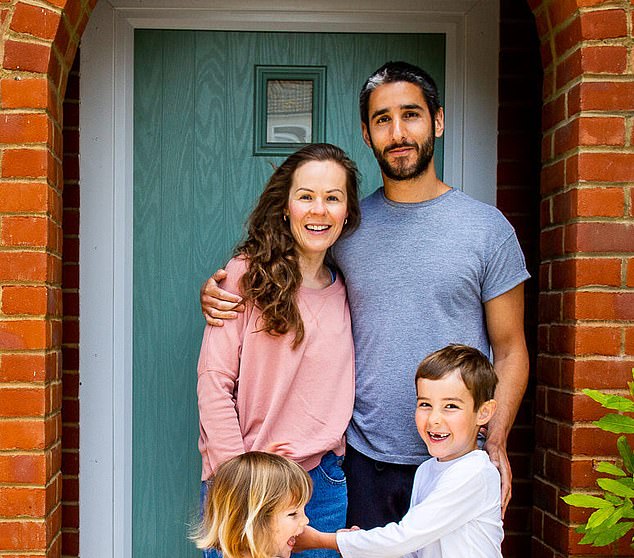 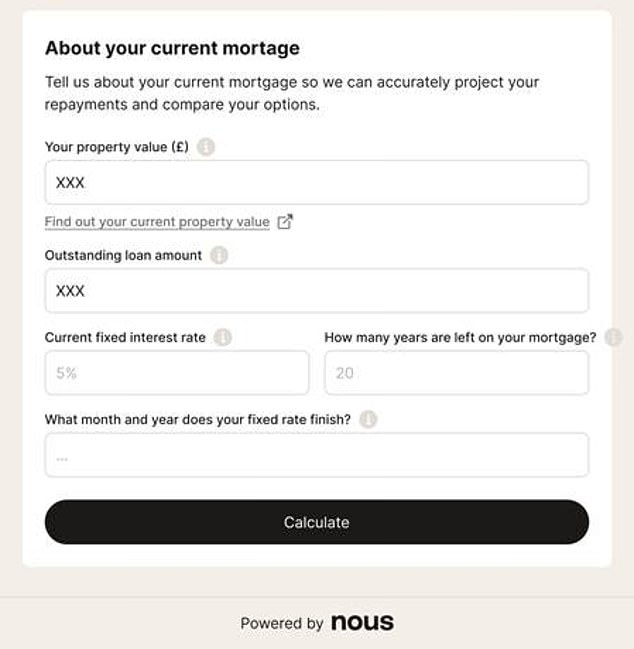 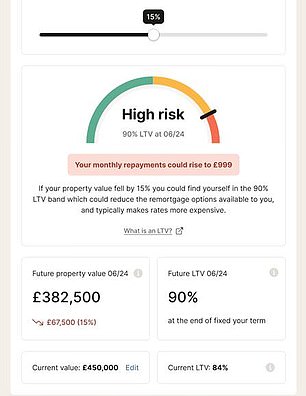 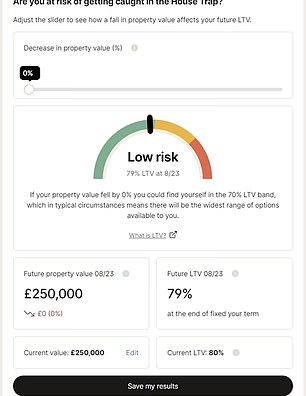 ‘My fixed rate deal was due to end in April 2023 but I recently began to panic about this, not just because interest rates are rising both quickly and sharply, but because house prices are now starting to fall too.

‘The number I found for the South East excluding London seems to be about an 11% fall in house prices.

‘For me that’s terrifying because if my house price fell by that much, I’d need a 100% LTV (lifetime value) product and they don’t exist!

‘So I was facing the increasingly real possibility of simply not being able to get a new fixed rate deal come April next year.

‘I bought my house in the height of Covid lockdown when all the banks pulled their high LTV mortgages off the shelves.

At the time I was pretty lucky to get a 90% LTV product, so I began to worry that if, come next April, if I need a 95% or even 90% product again, I might not be so lucky second time around.

‘And if that were to be the case, I would have no choice but to bounce onto my bank’s SVR (standard variable rate), which could be more like 8.5% by then.

‘Given that I still have a high balance (the amount I owe is still well over £400,000) that would render my monthly repayments completely unaffordable.

‘I’d be spending the overwhelming majority of my take-home page on my mortgage alone – before energy bills, food, petrol – or anything else.

‘I work full time in a decent job but I simply cannot afford that kind of monthly mortgage payment.

‘And this is my dream home – it’s an average 4 bed on a new-build estate but it’s still my family’s forever home and I don’t want to have to downsize and disrupt my kids’ schooling.

‘So in the end, I paid my early repayment charge (a small fortune in and of itself) and did a product transfer onto a new fixed rate deal.

‘It’s still way more expensive than the mortgage I originally took out, but it’s less than I’d expect to be paying on the SVR by next April and I’m willing to pay a price for certainty and peace of mind.’

‘Your current lender won’t withdraw your mortgage, but you’ll be forced to stick with them on a standard variable rate which is predicted in 2023 to be double the rate you were originally paying.’

‘And that variable rate could be as much as 1.5 per cent higher than you would pay if you were able to shop around for a better fixed deal.’

‘Our calculator will allow you to look ahead and plan for the financial pressures you may face in the next 12 or 24 months so the mortgage housetrap doesn’t take you by surprise.’

The Bank of England warned yesterday that millions of mortgage holders are set to see their bills soar next year. People with a fixed-rate home loan due to expire by the end of 2023 face laying out an extra £250 every month on average as they switch to higher interest rates.

A typical household in this situation will be paying 17 per cent of pre-tax income on servicing the mortgage, up from 12 per cent.

Four million owner-occupiers with mortgages – half the total – will be affected by hikes over the next 12 months. That includes 1.7million people on variable rates and those with fixes due to end. Payments will increase by at least £100 for 2.7million.

Governor Andrew Bailey told a press conference that the ‘economic environment is challenging’ but stressed that households are better placed to deal with this than during the 2008 ‘Credit Crunch’.

The Bank of England also warned this week that households and businesses face ‘significant pressure’ as interest rates rise and banks rein in lending.

Central bank officials said four million households would be hit with more expensive mortgage bills over the next year and higher unemployment would pile further pressure on families.

In its latest report on the stability of the UK’s financial system, the Financial Policy Committee said: ‘Falling real incomes, increases in mortgage costs and higher unemployment will place significant pressure on household finances.’

The share of households whose debt repayments are considered high when compared to their incomes would rise to 2.4 per cent, or around 670,000, up from around 1.5 per cent now.

The Bank said there were signs lenders, worried about the deteriorating economic outlook, were beginning to hand out loans less freely.

It said it would be on the look-out for ‘unwarranted tightening’ in banks’ lending criteria.

Property asking prices also fell by almost £8,000 on average over the last month, according to Rightmove, as home sellers ‘adjusted their expectations’ in a cooling market.

The slip up triggered by the mortgage crunch was the biggest for house prices on its index for four years.

The property portal reported a 2.1 per cent month-on-month fall, with asking price of the typical newly-listed home falling by £7,862. It followed a 1.1 per cent fall the previous month.

However, Rightmove said asking prices grew by 5.6 per cent over 2022 as a whole, fuelled by large increases in the early part of the year. This was compared to 6.3 per cent growth in 2021. 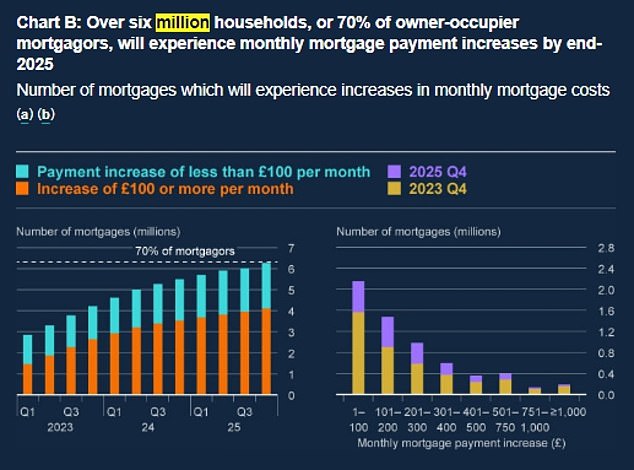 Four million owner-occupiers with mortgages – half the total – will be affected by hikes over the next 12 months, according to the Bank 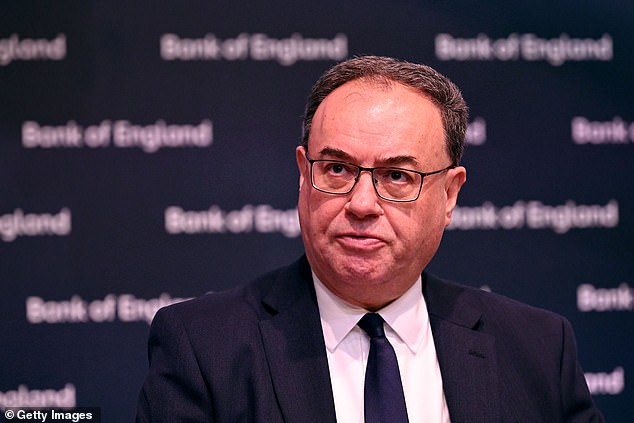 It comes as data released today by The Office for National Statistics (ONS) revealed that Britain’s rate of inflation eased back last month as prices rose at a slower pace in the year to November.

While food and energy remained painfully high, official figures showed some respite at the petrol pumps as well as on second-hand car forecourts.

By far, food and energy remained the biggest driver of the cost-of-living crunch facing families.

Food and non-alcoholic drink inflation hit a high of more than 45 years last month, at 16.4 per cent. Inflation for food alone reached 16.6 per cent.

Energy cost rises were the most eye watering, with electricity now 65.4 per cent more expensive than a year earlier and gas rocketing up by 128.9 per cent. 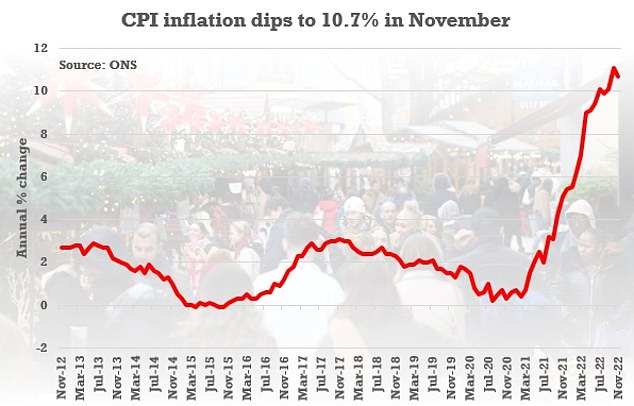 The headline CPI rate fell from the eye-watering 11.1 per cent recorded in October, and further than the 10.9 per cent analysts had expected 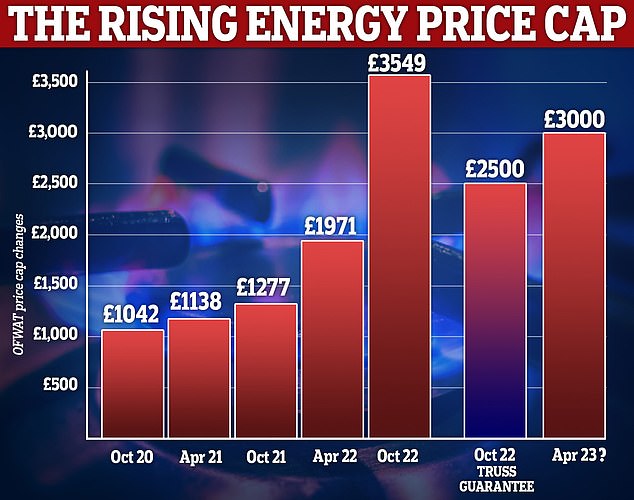 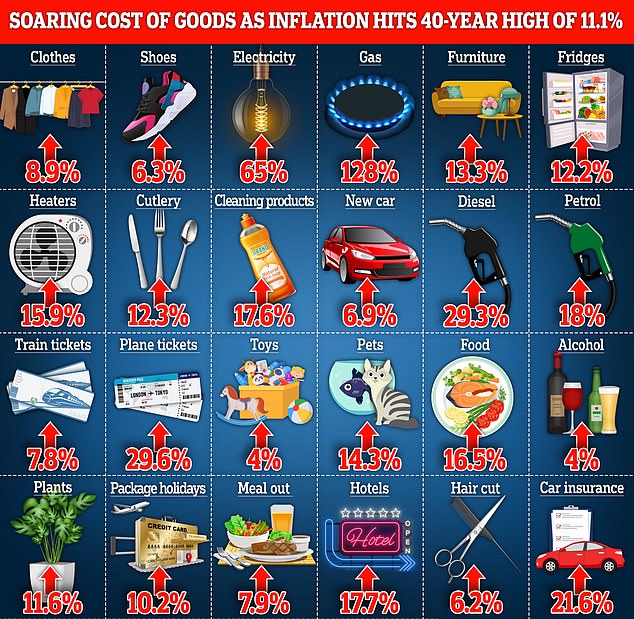 ‘Prices are still rising, but by less than this time last year, with the most notable example of this being motor fuels.

‘Tobacco and clothing prices also rose, but again by less than we saw this time last year.

‘This was partially offset by prices in restaurants, cafes and pubs, which went up this year compared to falling a year ago.’

‘People are genuinely terrified and that’s despite the fact that Scotland produces six times more gas than we can consume, with some 80% of our electricity coming from low carbon sources.

‘Decades of failed UK energy and regulatory policy coming home to roost, is it not the case that Scotland has the energy, we just need the power?’

Rishi Sunak replied: ‘It’s because of the actions of this Government that we are providing every household in this country with around £900 of support with their energy bills this winter.

‘£55 billion worth of support and on top of that next year there will be extra cost-of-living payments worth up to £1,200 for the most vulnerable, whether that’s those on means-tested benefits, pensioners or indeed the disabled.

‘This is a Government that will always look after the most vulnerable in our society.’