Riga: Russia is to start manufacturing its own Iranian-designed kamikaze drones under a deal with Tehran that will boost its ability to further cripple Ukraine’s energy infrastructure.

US intelligence agencies say Russian officials have signed an agreement for Iran to provide key components and know-how for the weapons and Nikolai Patrushev, the secretary of Russia’s security council and ex-head of the FSB secret service, visited Tehran on November 9. 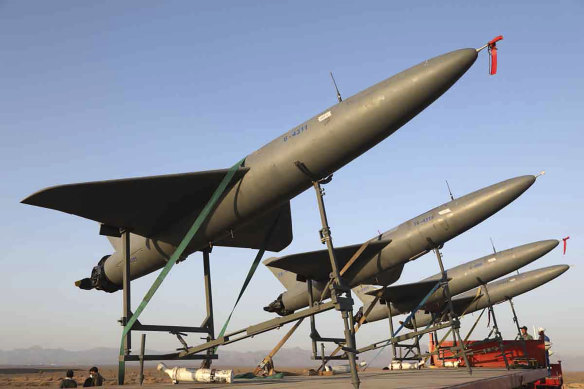 Iranian drones are prepared for launch during a military drone drill in Iran.Credit:AP

“It is proceeding quickly from decision-making to implementation,” The Washington Post quoted one Western security official as saying of the deal. “It is moving fast and it has a lot of steam.”

Iran is sending designs and materials to Russian weapons producers so that they can begin to make Shahed-136 drones within months, three officials familiar with the matter said.

Russia has used swarms of the Shahed-136 drones to attack Ukraine since October. The drones are cheap to produce and can be used to substitute for Russia’s depleted stocks of missiles.

The Kremlin bought hundreds of the drones earlier this year and rebranded them as Geranium-2, pretending they were produced in Russia.

Ukrainian witnesses said the buzzing hum of the engines sounded like a lawnmower and spread terror.

The Iranian government only admitted this month that it started supplying Russia with drones “months before” the invasion of Ukraine in February.

Vowing to counter the Iranian move, he added: “Iranian-supplied weapons threaten the entire region… the [Tehran] regime has resorted to selling Russia the armed drones that are killing civilians in Ukraine.”

Separately, Mykhailo Podolyak, an adviser to President Volodymyr Zelensky and one of Ukraine’s chief negotiators, said that despite pressure from the United States his country had no intention of negotiating with Moscow.

In an interview, Podolyak said that it would be bizarre to start negotiating with the Kremlin after Ukraine had achieved a series of battlefield victories that routed Russian forces from outside Kharkiv and forced them to retreat from the city of Kherson.

“When you have the initiative on the battlefield, it’s slightly bizarre to receive proposals like, ‘You will not be able to do everything by military means anyway, you need to negotiate’,” he said.

US officials have been pushing for Mr Zelensky to order peace talks while his forces have the upper hand but, so far, Ukrainian officials have instead insisted that they still want to push the Russian army out of the territory that it has occupied since 2014, including Crimea.

In Ukraine, several explosions yesterday rocked the area around the Zaporizhzhia nuclear power plant, the largest in Europe.

Russian forces took control of the plant in the first few days of their invasion back in February. Both sides have accused the other of firing missiles at the plant.

The International Atomic Energy Agency (IAEA), the UN’s nuclear watchdog, said that none of the explosions had damaged the plant yet but called for the bombardment to stop. 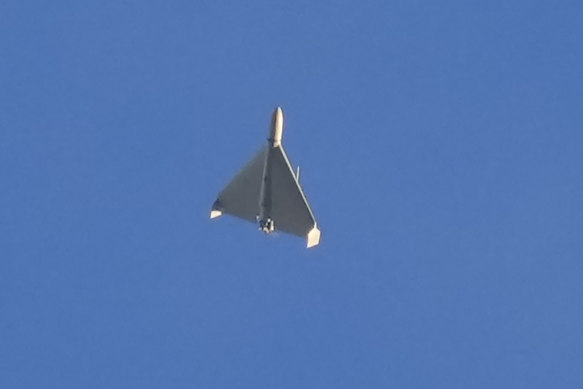 An Iranian drone is seen in the sky seconds before it fired on buildings in Kyiv.Credit:AP

“Whoever is behind this, it must stop immediately,” said Rafael Grossi, the IAEA chief. “You’re playing with fire.”

The plant had supplied around a fifth of Ukraine’s power before it was captured by Russia.

The Kremlin has targeted Ukraine’s energy production capacity ahead of winter and Ukrainian officials have now said that they don’t have enough to go around.