Police are investigating after seven naked men entered the Bryon Bay backyard of ‘Spa King’ Eddie Phillips, causing an estimated $10,000 worth of damage during a skinny dip in the early hours of New Year’s Day.

Phillips logged on to his CCTV while holidaying in Thailand and to his shock found a group of men swimming in his pool at his Byron Bay property.

The group smashed a number of ceramic pots, destroyed an expensive statue and threw furniture into the pool. The group also twerked on the pool steps while one of them filmed on their phone.

Phillips labelled the group of men “naked invaders” and said they were nothing more than “vandals”.

“I would have turned a blind eye to the skinny dipping if there wasn’t any damage but once I discovered there were expensive things, statues … destroyed [and] vandalised, I decided to get my people involved,” he told Nine News.

“These guys will be caught, and they will be charged by police.”

Phillip’s property sits on one of Byron Bay’s most sought-after addresses: Lighthouse Road. Phillips is known as the ‘Spa King’ after co-founding the Phillip Wain spa business in Asia. 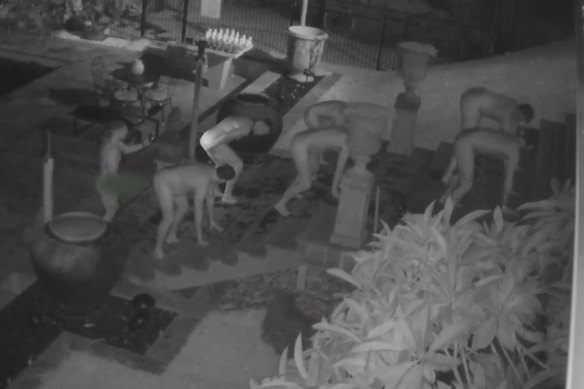 The group could be seen twerking on stairs near the pool while one of them filmed.Credit:Nine News

In a statement, NSW Police confirmed they had launched an investigation into the incident.

“Between 11pm (Saturday 31 December 2022) and 1am (Sunday 1 January 2023), an unknown number of people have entered the backyard of a house on Lighthouse Road, Byron Bay,” the statement said.

“Officers attached to Tweed Byron Police District were later notified and commenced an investigation into the circumstances surrounding the incident.”

Detectives are now hoping to find the footage taken by the group during the incident.

“As inquiries continues, officers urge anyone with information, social media images or CCTV footage to contact police or Crime Stoppers on 1800 333 000,” the statement said.