Nancy Pelosi, the US House Speaker, landed in Taiwan late on Tuesday night, defying threats of retaliation from Beijing and criticism that her trip was reckless and provocative.

Pelosi landed at 10.50 pm local time after a 7-hour flight that took her US Air Force plane around the Malaysian peninsula, away from the South China Sea and east of the Philippines on a trip that was tracked by more than 200,000 people online. 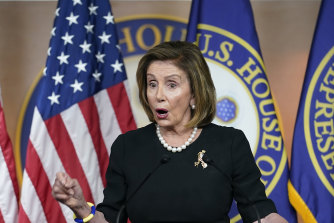 There were no public reports of mid-air incidents as her plane landed in Taipei after weeks of threats from Beijing that the United States was “playing with fire” by allowing Pelosi to travel to Taiwan, a self-ruled island that China claims as its own.

Pelosi, the second in line to the US presidency after Vice President Kamala Harris, was scheduled to be met by Taiwan’s Foreign Minister Joseph Wu on the tarmac at Taipei Songshan Airport.

Pelosi’s arrival followed a series of escalations by Beijing, division within the US national security establishment and growing fears the visit may spark an accidental conflict between the world’s two largest superpowers.

China on Tuesday blocked the importation of dozens of Taiwanese foods and began live-fire exercises off its north-eastern coast.

The measures sent markets in China tumbling and saw the Shanghai Composite and Hong Kong’s Hang Seng Index fall by more than 3 per cent.

Republican Newt Gingrich was the last US House Speaker to visit in 1997, but he was not a member of the governing Democratic Party. Pelosi and Tsai are expected to meet on Wednesday morning.

The visit by 82-year-old Pelosi has been viewed by Beijing as an endorsement of Taiwan’s government by the Biden administration. Beijing claims self-governed Taiwan is a province of the mainland, despite the Chinese Communist Party never having ruled the neighbouring democratic island of 24 million people.

Pelosi had not commented publicly on the trip, but plans were leaked to US and Taiwanese media and the reports provoked an increasingly heavy rhetorical response from Beijing. It warned on Monday that its military “will not sit idly by”.

China’s customs authority announced overnight that it would suspend the importation of 180 products, including cakes, biscuits and pineapple juices. Sina Weibo Taiwan, a Chinese microblogging service similar to Twitter, went down on Tuesday, but it was not clear if it was related to Pelosi’s visit.

“We will not be intimidated by the PRC’s weaponisation of trade,” said Taiwanese MP Wang Ting Yu, referring to the initials for the People’s Republic of China.

China has previously banned Taiwanese imports such as pineapples during times of high political tension with Taipei. 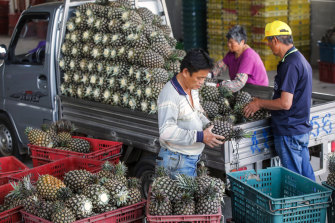 Workers sort harvested pineapples at a distribution centre in Nantou County, Taiwan. China surprised Taiwan in May with a move to block pineapple imports.Credit:Bloomberg

But analysts are concerned that Pelosi’s visit could escalate the dispute beyond trade sanctions.

“Pelosi’s trip is unlikely to start a new crisis in the Taiwan Strait by itself, but it is indicative of a bigger spiral of tension that could lead to a serious crisis, or even an armed conflict, between the United States and China,” said the Cato Institute’s director of defence policy studies, Eric Gomez.

China began live-fire exercises in the Bohai Sea on Monday and has steadily increased its release of war propaganda to coincide with Pelosi’s visit and the 95th anniversary of the People’s Liberation Army on Monday.

“The Chinese response will likely involve additional large-scale military activities in the Taiwan Strait. All these manoeuvres in close quarters could lead to dangerous encounters or, worse, an accidental collision, which could in turn spark further brinksmanship and escalation,” said International Crisis Group senior analyst Amanda Hsiao.

“If managed poorly, this event could lock in place a more confrontational approach to the Taiwan issue on both sides, making future dynamics yet more dangerous.”

Foreign Minister Penny Wong and opposition foreign affairs spokesman Simon Birmingham have yet to comment publicly on Pelosi’s trip, but she has received support from the current and future chairs of the Parliamentary Joint Committee on Intelligence and Security, Liberal senator James Paterson and Labor MP Peter Khalil.

“It’s a reaffirmation of the Biden administration’s commitment to the region,” Khalil told Sky News on Tuesday.

“As James said, this is a really important trip because it is all about US presence and US engagement, both economic and in a security sense in our region as a stabilising force.”