Tokyo: A new coronavirus variant has been detected in four travellers from Brazil's Amazonas state, Japan's Health Ministry said on Sunday, the latest new mutation of the virus discovered.

A ministry official said studies were underway into the efficacy of vaccines against the new variant, which differs from highly infectious variants first found in Britain and South Africa that have driven a surge in cases.

"At the moment, there is no proof showing the new variant found in those from Brazil is high in infectiousness," Takaji Wakita, head of the National Institute of Infectious Diseases, told a health ministry briefing. 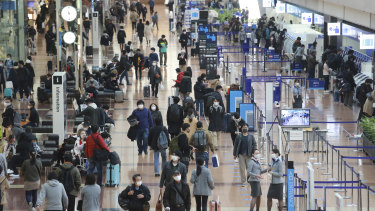 People wear face masks at Haneda Airport in Tokyo. Four passengers from Brazil quarantined at the airport have been diagnosed with carrying a new variant of coronavirus.Credit:AP

Still, Brazil's Health Ministry said it has been notified by Japan's authorities that the new variant has 12 mutations, and one of them has already been identified also in the variants found in the United Kingdom and in South Africa. "It implies in a potential higher virus infectiousness," it said.

Of the four travellers who arrived at Tokyo's Haneda airport on January 2, a man in his 40s had a problem breathing, a woman in her 30s had a headache and sore throat and a teenage boy had a fever, while a teenage girl showed no symptoms, the ministry said.

All travellers are in quarantine at Tokyo's airport, Brazil's Health Ministry said.

After seeing a steep rise in coronavirus cases, Japan declared a state of emergency for Tokyo and three prefectures neighbouring the capital on Thursday.

The country has recorded about 289,000 cases in total, with 4061 deaths, public broadcaster NHK said.

Meanwhile, a top public health official says the highly infectious variant of the novel coronavirus seen in Britain has been detected in Russia.

Anna Popova, a doctor who heads Rospotrebnadzor, a government agency for human wellbeing, said on state television on Sunday that the variant has been found in one patient, who had returned to the country from Britain.

Russia overall has reported about 3.4 million cases of infection and 61,800 deaths. The number of daily new cases and fatalities has been declining since the start of 2021.

Israel races to be first to vaccinate population

Israel’s Prime Minister has personally welcomed a new shipment of Pfizer-BioNTech coronavirus vaccines to the country.

Benjamin Netanyahu is racing to make Israel the first country to vaccinate its population. In just three weeks, Israel already has given the first of two vaccine doses to nearly 20 per cent of its population. It also has agreed to share data from the campaign with Pfizer in hopes of helping other countries end the pandemic.

At a small ceremony at Israel’s main international airport on Sunday, Netanyahu said Israel has secured enough vaccines to inoculate its adult population by the end of March. That would be just around the time of March 23 parliamentary elections. 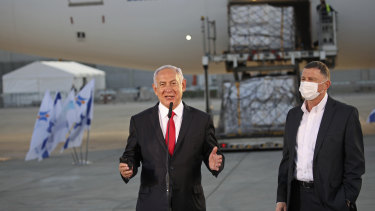 Israeli PM Benjamin Netanyahu, centre, and Health Minister Yuli Edelstein, with a shipment of Pfizer coronavirus vaccine, at Ben Gurion Airport near the city of Lod, on Sunday.Credit:AP

Netanyahu is putting the aggressive vaccination drive at the forefront of his re-election hopes. Locked in a tough race, he seems to be counting that a successful vaccination drive will persuade voters to forget about his corruption trial and the economic damage caused by repeated coronavirus lockdowns.

Israel tightened its lockdown restrictions over the weekend, in what Netanyahu says is “one last effort” to halt a raging outbreak.

Israel has recorded more than 487,000 coronavirus infections and over 3,650 deaths since the pandemic emerged in the spring.

More than 3 million infected in Africa

The African continent has passed the milestone of 3 million confirmed cases COVID-19, including more than 72,000 deaths, according to the Africa Centres for Disease Control and Prevention.

South Africa accounts for more than 30 per cent of the continent’s total with more than 1.2 million reported cases, including 32,824 deaths. The high proportion of cases in South Africa could be because the country carries out more tests than many other African countries. 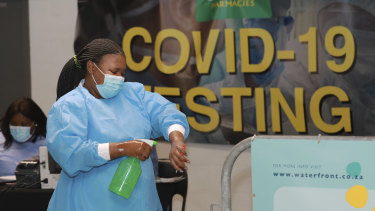 A healthcare worker sanitises her hands before conducting COVID-19 tests at a drive-through testing station in Cape Town, South Africa.Credit:AP

South Africa is battling a resurgence of the disease, driven by a variant of the virus that is more contagious and spreading quickly. Many hospitals are reaching capacity, yet the numbers of those infected are expected to continue rising, according to health experts.

South African President Cyril Ramaphosa will meet with his Cabinet this week to consider if further restrictions should be taken to slow the spread of the disease, while balancing the need to encourage economic growth.