‘Don’t clap for us!’ NHS workers say they don’t want a weekly round of applause as they urge public to wear masks and respect lockdown instead

NHS doctors, paramedics and surgeons have hit out at the return of Clap for Carers at 8pm tonight, saying they would rather people respect the national lockdown.

Medics took to Twitter to call the event ‘cringeworthy and pointless’ while urging the public to ‘just let us get on, do our jobs and clear up the mess we’re in.’

Other staff said they would rather have a pay rise and an end to abuse, claiming the Government wanted people to ‘pity us because they say we can’t cope’.

Nurses in the NHS were told last month that they will have to wait until at least this May for a pay rise they were promised by the Government after it was delayed.

Tonight’s event, now renamed Clap for Heroes, calls on people up across the UK to applaud in appreciation of those at the front line in the fight against Covid-19.

Annemarie Plas, 36, who came up with the weekly ritual that ran for ten weeks on Thursdays at 8pm during the first lockdown, confirmed yesterday that it is returning. 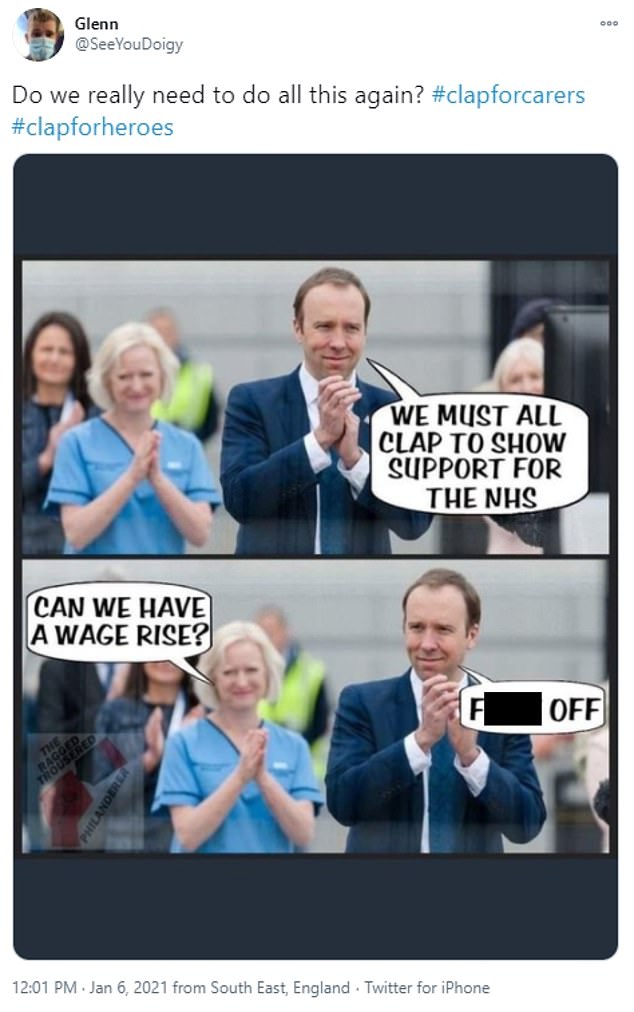 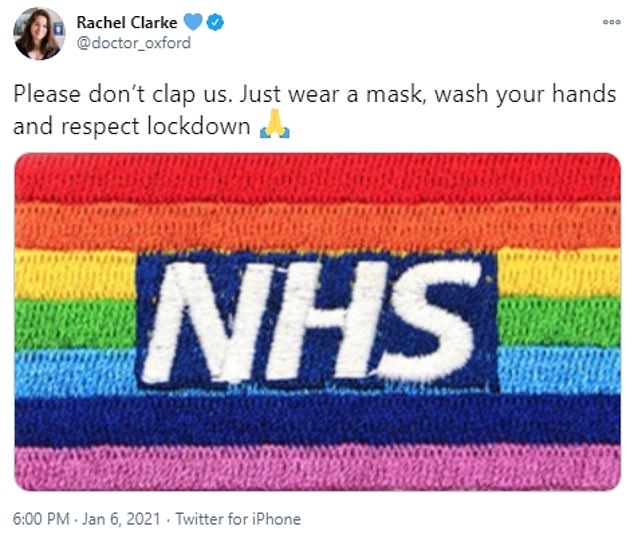 But Yazan Masannat, a surgeon for breast cancer patients at Aberdeen Royal Infirmary, tweeted: ‘We really don’t want people to clap for us for doing our jobs.

‘Just stay at home and avoid getting infected and infecting everybody else that is more helpful. #ClapForHeroes #CoronavirusUK.’

‘Just say thank you, buy us a coffee, send a box of treats in to your local hospital, be understanding if we go to the front of a queue. Do anything to say thanks apart from clap or bang a saucepan!’ 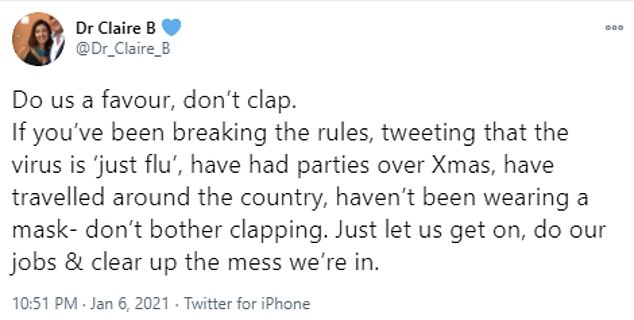 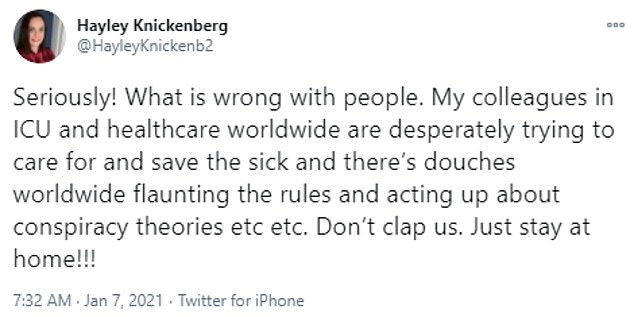 And Mel Raunch, an NHS theatre store manager from Cambridge, said: ‘Don’t clap! The Government want you to pity us because they say we can’t cope, that it’s our fault.

‘It is ten years of cuts, secondment/bursary, pay also. Don’t fall for it. They are doing it to schools too. Turning people on the ‘key’ workers rather than them. They own us, they own this.’

Speaking yesterday about its return at 8pm tonight, Ms Plas said: ‘When we first started clapping for our incredible NHS staff, care workers and key workers last March, none of us had any expectation that we would be in an even worse situation nine months later. 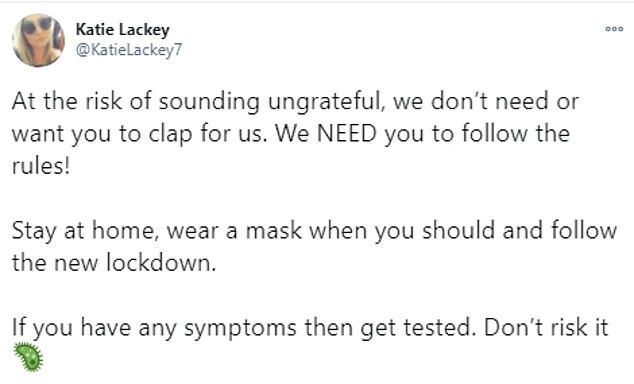 ‘Last year the weekly applause united communities and had us talking to our neighbours whilst we acknowledged the immense sacrifices our carers were making.

‘They were and still are heroes, but this time round we also want to recognise all the other heroes that keep the country going and have endured such challenging times.

‘This Thursday at 8pm we want the whole country to unite again to remember and celebrate all of these heroes, including those most dear to us. Bring out those pots and pans, get the kids involved – they’ve been heroes too after all!’

Miss Plas, a Dutch national living in South London, came up with the ‘spontaneous idea’ as a way to show support for frontline workers battling Covid-19, and thought it might end up being just her and a few friends sharing the moment on video chat.

However, it quickly became a national tradition every Thursday at 8pm during the first lockdown. 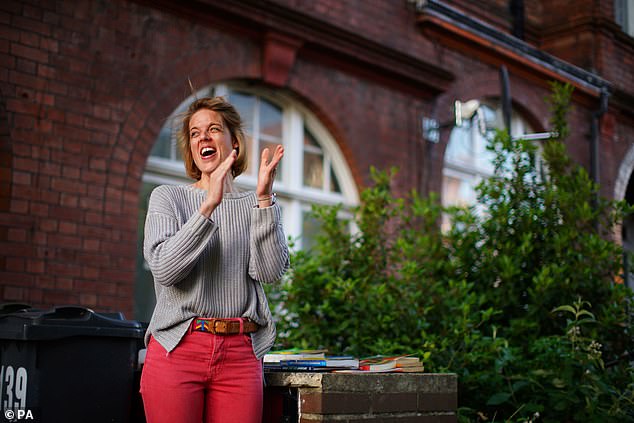 Annemarie Plas, 36, who came up with the weekly ritual that ran for ten weeks on Thursdays at 8pm during the first lockdown, said yesterday that it would return. She is pictured last May 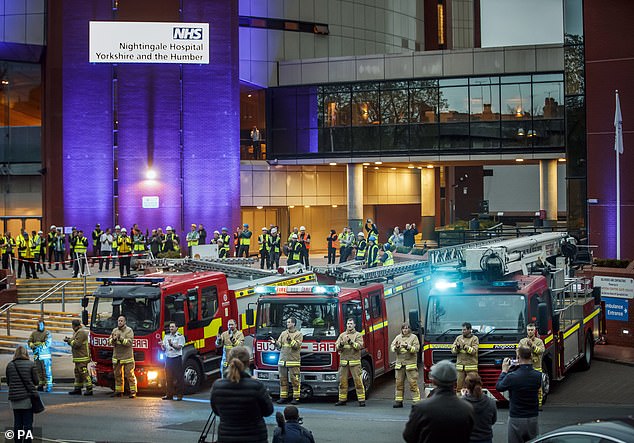 Members of the fire brigade, construction workers and members of the public, join in with Clap for Carers outside the Nightingale Hospital in Harrogate, North Yorkshire, last April 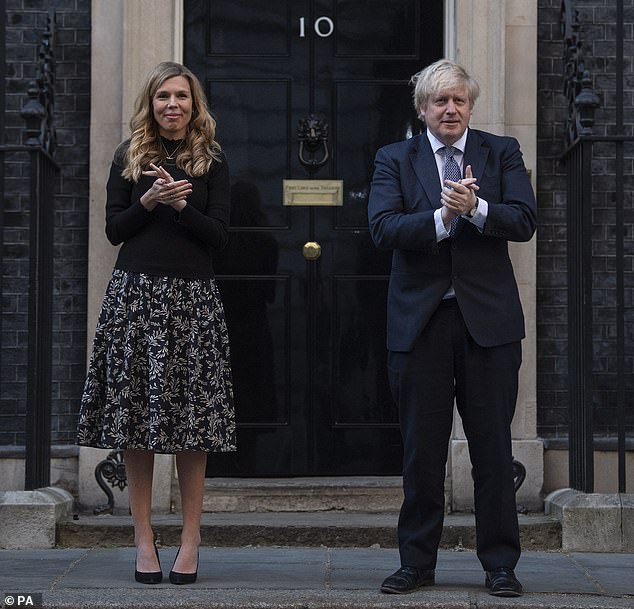 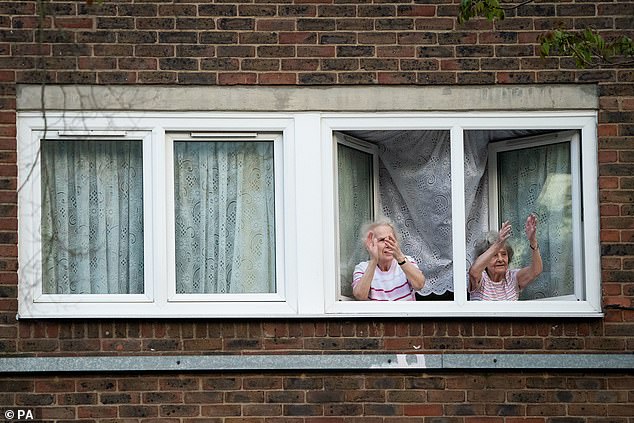 Residents near Whittington Hospital in Highgate, North London, join in by clapping last May 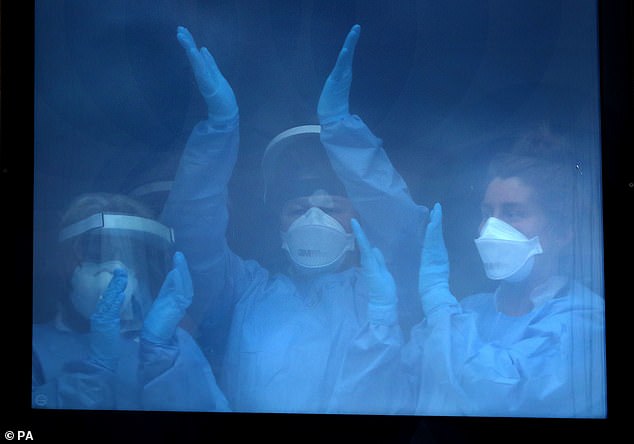 Millions of people across the UK lined their thresholds, gathered on pavements and stood in their gardens to support care staff and frontline workers.

Some set off fireworks, honked their car horns and even used kitchen utensils to make as much noise as possible.

Members of the Royal Family and Prime Minister Boris Johnson also joined in with the show of support. However, the event was criticised for becoming politicised.

‘Without getting too political, I share some of the opinions that some people have about it becoming politicised,’ Ms Plas said ahead of the final clap in May.

‘I think the narrative is starting to change and I don’t want the clap to be negative.’