Home » Not a plea, a demand: let’s make misogyny history

As the revelations of violent, sexist and misogynistic conduct in Parliament House have poured out day after day after day, I have felt wave after wave of emotion.

Two ever-present feelings are awe and sadness: awe at the courage of the women who have stepped forward – especially Brittany Higgins, who has stood so tall in the maelstrom – and sadness and tears because so many have experienced so much pain. 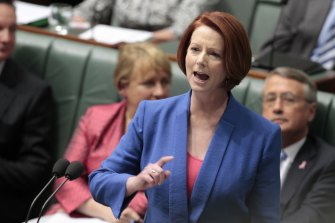 Julia Gillard delivers her famous misogyny speech against then lead of the opposition Tony Abbott.Credit:Andrew Meares

Then there are the other emotions that circle, snapping at each other’s heels. Energetic anger gives way to stagnant frustration. Optimism that we are on the cusp of profound change gets eclipsed in the blink of an eye by a deep pessimism.

In the middle of these up and downs, I have been sustained by the feeling that I am one of many. Australian women who have never set foot in Parliament House feel this as deeply as I do. Tens of thousands have marched in the street.

At one level, women have become involved because they believe the home of our democracy should be an exemplar of equal treatment of women, not a place for shameful conduct by men. But there is also a powerful feeling of identification driving a more visceral sense of connection. Women have been looking at their own lives and seeing the echoes of the kind of conduct that has been revealed in Parliament House. Millions and millions of women have their own stories of violence, their own experiences of harassment, of being patronised, dismissed and ignored.

The duality of this reaction has meant for many weeks now, there has been a clash between women’s expectations and the reactions of the political system. Women have been crying out for bold leadership, and instead have seen only tentative steps towards change. 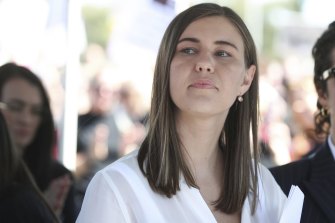 Brittany Higgins has “stood tall in the maelstrom”.Credit:Alex Ellinghausen

Since 2018, one of the slogans of the Time’s Up movement has been “we come in peace, but we mean business”. It was first uttered by musician and actor Janelle Monáe in a powerful speech at the Grammy Awards. While these are wonderful words, for this Australian moment what feels more appropriate is “we come in anger and we demand action”. Yes, we still come in peace – but don’t mistake how enraged we are.

What should that action look like? First, let’s think big enough to forever change our nation.

Each year, the World Economic Forum ranks nations on gender equality. In the most recent report, New Zealand has moved up two spots and is at now at No.4 in the world, while Australia has dropped from 44 to 50. Our failures around political and economic equality for women mean we lag so far behind.

No one should be satisfied with this result and it is now time to declare as a national goal that in 2030, we will be in the top 10 on that ranking. That might sound ambitious but if New Zealand can do it, then surely we can. Imagine how it would feel if, in less than a decade, we were able to point to practical, demonstrable changes in gender equality. Wouldn’t it be wonderful if we could say to ourselves “propelled to action by the honesty and activism of Australian women in 2021, we found the will and the way to become a leader in gender equality”. 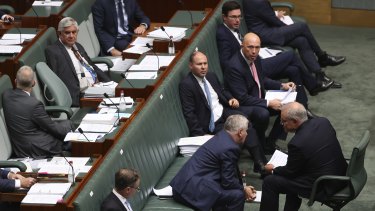 Gender equity is not apparent on the Coalition’s government benches but that can and should change.Credit:Alex Ellinghausen

Every political party should commit to ensuring that 50 per cent of their representatives in Parliament will be women. The ALP has already done so. It is time the government also adopted this commitment. Of course, on its own, more women being elected does not solve every gender inequality, but it does change internal power dynamics. It also means that merit is foregrounded. Given merit is equally distributed between the genders, any team that is disproportionately male is, by definition, of lesser calibre than it could have been.

Then, for every woman who works in Parliament House, let’s make it safe, inclusive and respectful. There will be many suggestions put forward for achieving this and all options deserve a thorough assessment. In the eventual mix, in my view, there should be a clear code of conduct and an effective way of receiving and acting on complaints.

The positive responses to the [email protected] report this week are welcome and demonstrate that there is an appetite for change which will be meaningful in and beyond Parliament House. Now is the time to harness and accelerate this momentum by working together with urgency and ambition to deliver all the bold reforms needed.

As the debate has raged over the past couple of months, I have been approached by men who want to help but are not sure how. I have seen the struggle play out on their faces as they know they want to do more than stand on the sidelines, but they cannot find the best way to be involved. Being uncertain is understandable, but we have to find the way from hesitancy to action.

Please know this. Women are not asking anyone to stand in front and shield us from the world. We are not asking men to stand aside while we march forward alone. Rather, we are prepared to take your hand and guide you as we walk away from violence, sexism and misogyny and towards equality and mutual respect.

Julia Gillard is a former prime minister of Australia.